A fake/satirical website named ChristWire posted an article titled: "Confirmed: Gays Are Using Snapchat's New Snap Map Location Feature To Hunt Down Straight Men And Turn Them Gay" on June 30th 2017 and it went quite viral, collecting significantly more likes and shares than the other articles they had up at the time. It starts:

Moles within the gays community confirm that gays have used their technological prowess to exploit Snapchat's new Snap Map feature to hunt down straight men and groom them into homosexuality.

Earlier in the week, reports arose nationwide that straight fathers taking innocent morning strolls or late night jaunts to the supermarket were making up missing, only to be found hours later exhausted and with spent sweat, the 'look of homosexuality' raging within their eyes.

Scientists from the CDC found that their symptoms were consistent with homosexuality, though their families insisted that they previously showed no sort of interest in the lifestyle. Researchers found that the only thing all the men had in common is their smartphones contained the Snapchat app.

The Christian Defense League of Texas reports that as of Friday, over 6,586 have had their location 'snap mapped' by gays on the prowl, some traveling as far as California or New York to the Bible Belt to "get a taste of American beefcake." 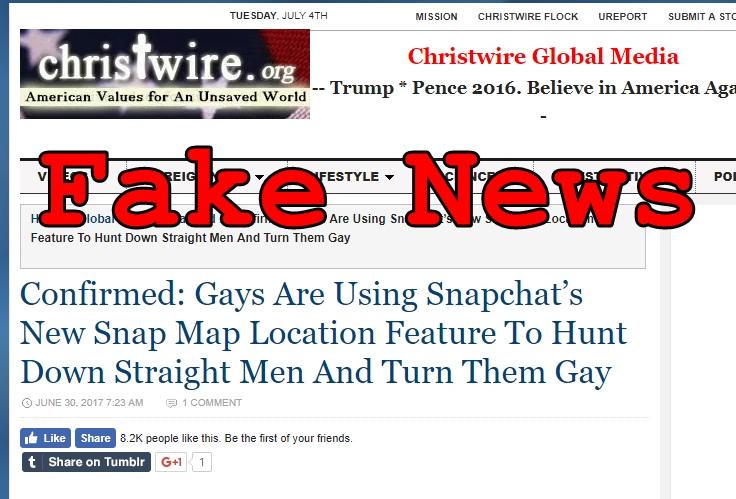 There is no "Christian Defense League of Texas" and the ChristWire is merely satire, as confirmed by RealOrSatire and Wikipedia (although no satire disclaimers are present on the website). At least two other sites with similarily themed over-the-top Christian conservatism satire articles are using the same google Adsense ID as ChristWire, implying they are owned or operated by the same people: Liberal Darkness and Only In American.

The article is a huge succes for ChristWire as most of their other articles have only received a few dozen likes/shares recently. As the Trendolizer graph at the end of this article shows, this one is well on it's way to break 10.000. If you want to stop Christian friends from deleting their Snapchat account because of fake news, don't hesitate to send them here...