Fake news website Our Land of the Free posted a hoax article titled "Julian Assange Tells Americans To Rise Up If The Deep State 'Succeeds In Ousting Trump'". It opens:

By now, it's pretty clear what is happening. The "Deep State" is displeased with Donald Trump's amazing progress as President and seeks to undermine his many, many accomplishments by getting rid of him over that phone Russia story.

Democrats "can continue their obsession with the Russian hoax or they can serve the interests of the American people," Trump said at a campaign event in Huntington, West Virginia after their Democrat governor announced he's had enough of the bullspit and switched parties.

Even Julian Assange is speaking out. He posted a video of people rising up in the streets in Venezuela as their country is taken over by animals consumed by political ambition. 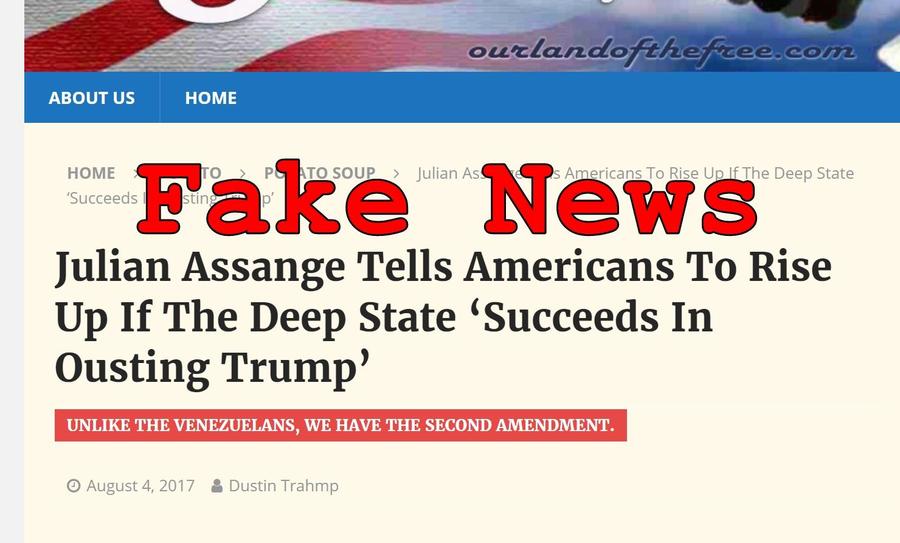 This is happening in Venezuela right now. If the #DeepState succeeds in ousting @realDonaldTrump, expect the same. pic.twitter.com/HC7wBOc0ys

On top of that "Ourlandofthefree.com" sports following disclaimer on the about page:

Ourlandofthefree.com makes no guarantee that anything you find here will be based at all in reality. All posts should be considered satirical and all images photoshopped to look like something they're not. It's not you, it's me.

So it is pretty clear that Assange never said or posted what the article claims he did. Don't be fooled like the hundreds of people who fell for it already as you can see in the Trendolizer graph at the end of this article. If you see anyone on your Facebook timeline who might be tempted to base life-altering decisions on the fake facts in this story, send them over here...