Some prankster used joke website React365 to post an article titled "Large Cat Causes Concern at Lake of the Ozarks". The full text of the hoax read:

The Lake of the Ozarks is no stranger to more exotic members of the animal kingdom with the appearance of piranhas and an alligator sighting, but what was seen lurking near the lake shore near Laurie has everyone's head spinning. Lock up your pets and bring your kids in the house, we have a Missouri tiger at our lake and he doesn't play football.
Late Thursday local resident, Tony DerGrate,had brought his family out for an evening boat excursion.
"We were just sitting there in the water when my wife got this shocked look. I followed her line of sight and sitting on the rocks chewing on what appeared to be a rabbit was this massive tiger. I had never seen anything like it but in zoos!" exclaimed DeGrate.
As he was calling the Morgan County Sheriffs Department other reports of startling images from gaming cameras started rolling in. The tiger had been spotted wandering around various lake homes.

None of it is true. The picture was actually taken in Nepal in 2012 or even before that. 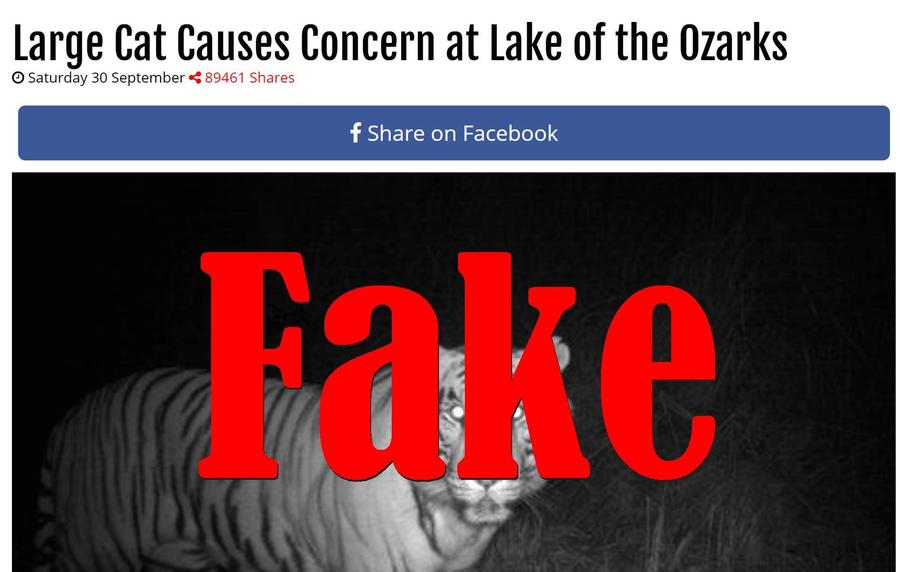