Sergeant La David T. Johnson was among four soldiers killed in Niger when terrorists attacked his unit and ever since his death his mother, Cowanda Jones-Johnson, has been attacking Trump on liberal news programs.

If you've wondered why she has been trying to keep attention focused on the President instead of her son, we now have answers. Breitbart News discovered that Mr. Johnson wasn't the perfect soldier that his mother wants us to believe:

According to members of Johnson's unit, he had disappeared days before the attack.

It is unknown if he met anyone in the multiple days he was gone, but the attack occurred when three other members of his unit went out searching for him.

"I don't want to raise the alarm yet, but it seems that he was trying to pull a Bergdahl," said the soldier, who discussed the situation on condition of anonymity because he is not authorized to talk about it. "It seems suspicious that these terrorists were waiting for them."

At least two other soldiers voiced the same concerns.

The accusation is not true at all. Sgt. La David T. Johnson did die in Niger but there is no indication at all he was a deserter. Breitbart News did not report that he was and the fact that the supposed members of his unit are anonymous should be a red flag too. 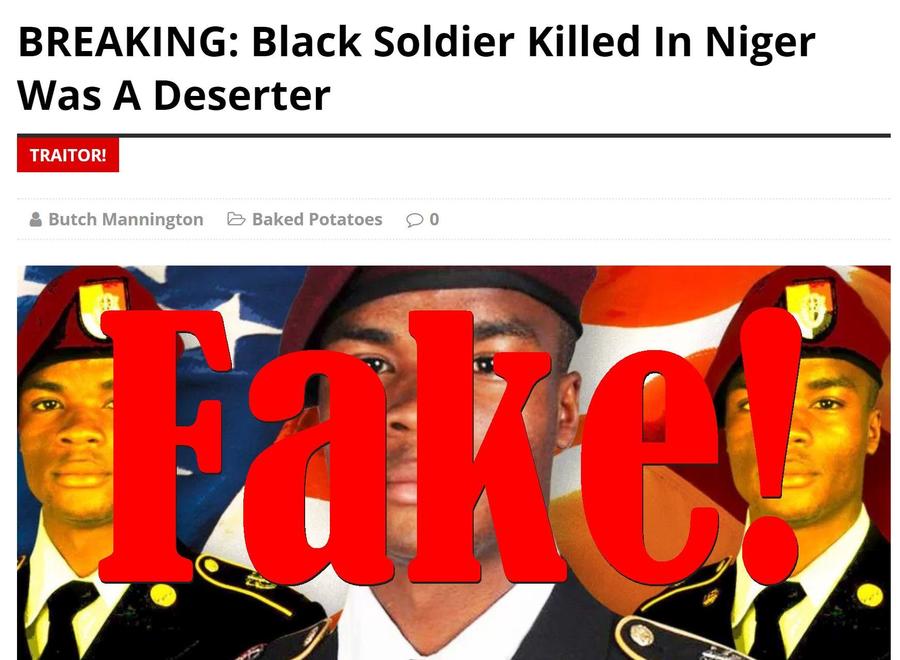 On top of that Freedum Junkshun carries a satire disclaimer at the bottom of the page which reads:

Slandering a fallen soldier could be considered as satire by some (although we wouldn't agree with those people). And doing it while knowing the accusation will probably get picked up by 'real' fake news sites is another thing. However that seems to be just what happened here.