A dubious website titled Red Line Page posted breathlessly "Literally a few hours ago the world was in shock - George Soros was dead! He was found dead in the Burj al Arab hotel in Dubai. He was 87 years old.". The death hoax article opened:

From what we now know, the cause of death was heart attack. The death of a Jewish billionaire caused a huge stir in Dubai. The whole hotel was surrounded by the police and the army in just over an hour and a half. All guests in the hotel are prohibited from leaving until the end of the matter. Nobody can enter it. The UAE authorities are already in place, and even Jacob Rothschild has appeared on one of the journalists.

At 11:30 AM, George Soros was to meet Sheikh Mohammed bin Rashid Al-Makotum. He did not appear at the meeting. Concerned by this situation, the sheikh went to the Burj al-Arab hotel where Soros had recently been staying. From one of the consignees, he learned that he had never been a sign of life since last night! Mohammed ordered him to enter his room and check what had happened. There he saw him dead, lying beside the bed. He immediately alarmed the hotel manager and called the ambulance. But it was too late ... George Soros had been dead for many hours.

It was initially determined that death occurred between the hours of 21 and 22, the day before yesterday. After the corpses will know more about this. For the time being, the police refuse to provide explanations.

The story was posted on october 24th 2017 and mentions he died "the day before yesterday", and yet on october 26th Soros tweeted:

So either the ghost of Soros is tweeting from beyond the grave, or the article is completely made up. 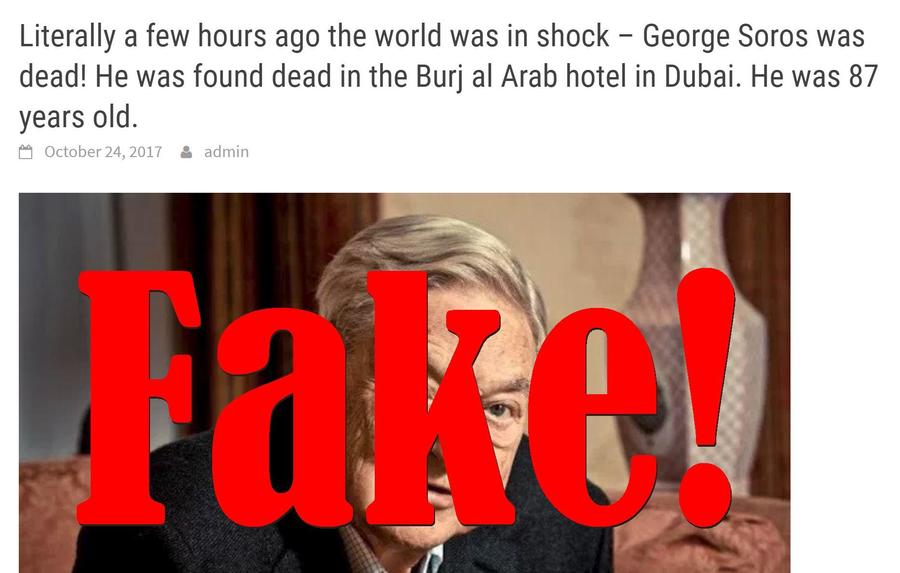 Let's check the source it mentions:

Some Polish blogspot page? That sounds credible. Let's check it out. Here is the archived version of the article. Let's scroll all the way to the end and pull some of the closing paragraphs through Google Translate:

THIS ARTICLE IS FAKE NEWS !!!

This is. I'm not kidding. The whole article is sucked from the finger. There is no truth in it. George Soros lives and continues to chaos in the world ...

Many of you, reading this, are probably boiling now with rage. You're probably screaming out loud: 'What a liar!', '' Damn fool! '' 'And I thought that skur ** el ran!' Yes, you have the right to be pissed. But at least I am honest with you and I immediately say that it is FAKE NEWS! This article was kind of a test. I wanted to see how many of you read this article to the very end. If you have reached here - congratulations! You will be able to verify what you will find on the net. If not - let it be a lesson for you. Today is full of false and misleading information. A lot of people (somewhere I've read about research on this subject) after reading only the headline of the article, make it available further, without checking if it is real information. This is exactly how the plague spread into the network a variety of fake news.

Well played, Marek Michalak, well played. Bet you didn't think 'real' fake news websites would steal your article minus the disclaimer, did you?