A satirical story titled "Overweight German man who joined ISIS says they used him as sex slave" was posted on World News Daily Report and opened:

Berlin | A 28-year-old German man who had officially joined ISIS forces in 2015 has recently escaped from Syria after he was allegedly turned into a sex slave by ISIS forces.

The young man, who had converted to Islam in 2014, had pledged allegiance to ISIS hoping to become a full-fledged soldier in its war against Western civilization.

Instead, he was rapidly turned into a sex slave for ISIS combatants, spending most of his time in captivity chained to a bed, dressed up as a Western-style woman and performing sexual services on ISIS soldiers daily until his recent escape.

"I went there to fight but I guess they had other plans for me," he told reporters, visibly ashamed.

"Upon my arrival, they kept pinching my ass, rubbing my nipples across my shirt and whistling at me," he said.

"At first, I thought it was all fun and games until I woke up one day chained to a bed, dressed in a robe with makeup and lipstick on my face," he recalls in horror.

The picture used with the story does indeed show Christian Emde, a German ex-protestant who converted to Islam and joined ISIS. You can watch an interview with him here: https://www.facebook.com/JuergenTodenhoefer/videos/10152723644955838/ 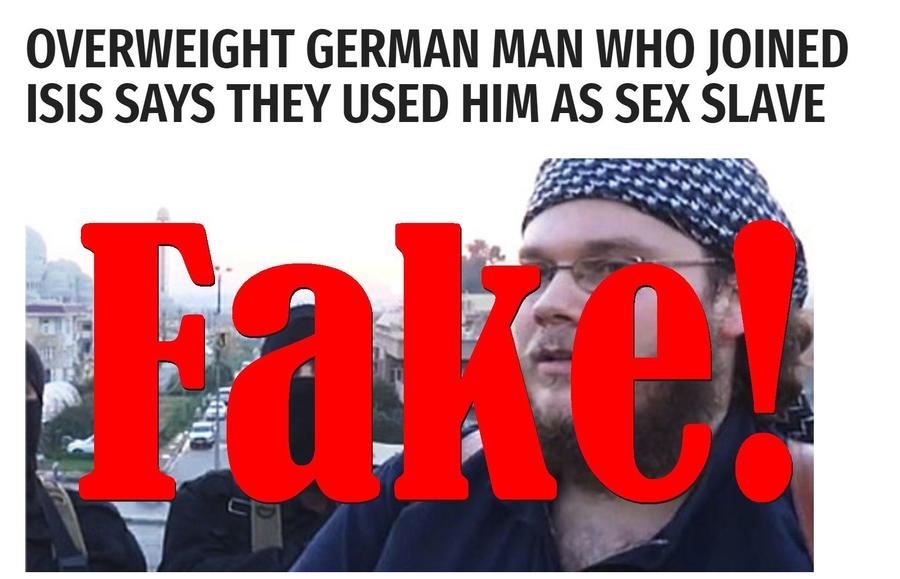 But the website World News Daily Report is a well known hoax website specialized in posting hoaxes and made up stories. The disclaimer on their website is pretty clear about that even though you have to scroll all the way down the page to find it:

If believing this story will stop you from joining ISIS however, by all means do believe it is true. If you have no such plans, definitely take this story with a big grain of salt. Also note that stories on World News Daily Report often get reposted by "real" fake news websites without the satire disclaimer. If you see it on any other sites, know that it originated from a satirical website and that some other website is trying to fool you and your friends into sharing the article so they can make a bit of money through advertising. Don't let them get away with it.