San Mateo, CA | A Californian man is being treated at the San Mateo Medical Center after his boyfriend's fist was stuck for a painstaking 14 hours in his own rectum.

Both men were transported by ambulance to San Mateo Medical Center where hospital staff successfully released the man's hand only 14 hours later, a complicated task due to heavy inflammation, blood loss and risk of laceration, say doctors.

"I know I'll never have the opportunity to give birth in my lifetime, but I think I know what it feels like now" Mathew Cunning, 23, told reporters.

"I just talked to my mom on the phone and she told me she had felt the same thing when she was in labor," he admitted.

The story is entirely fictional and there is no truth to it at all. The photo that was used to illustrate the story actually shows David Priestman, a 35-year old Manchester man who gave up his own hospital bed to victims of the May 2017 terror attack on an Ariana Grande concert in which 23 people were killed and over 500 injured. Priestman was recovering from surgery but discharged himself from hospital in order to be able to do something to help. 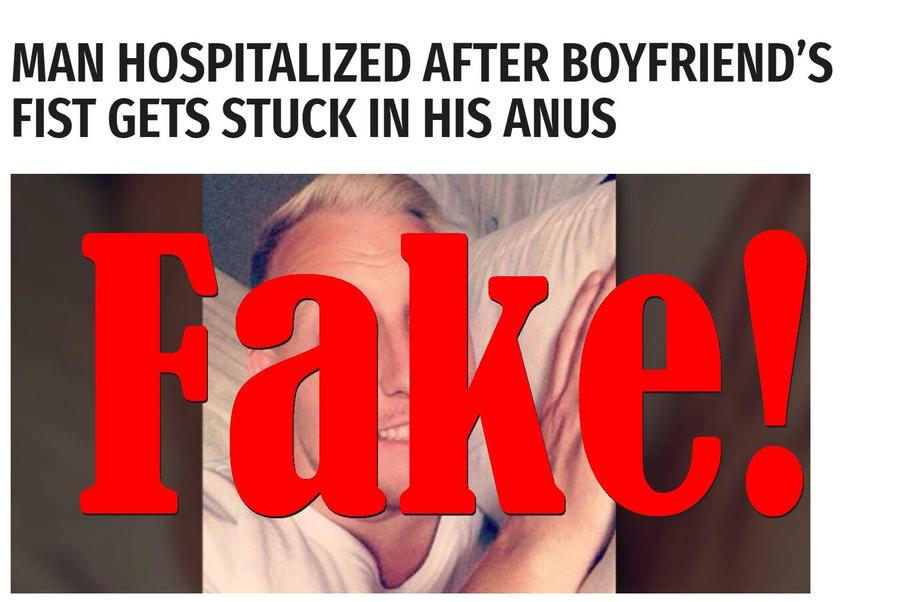 The site frequently uses random pictures of people found on the internet to illustrate invented tales of silly crimes or bizarre accidents. It has been active since at least 2013 according to domain name registration records and has been responsible for countless hoaxes going viral. Stories originating on the site frequently get copied by fake news websites that tend to omit the satire disclaimer or any mention of the source.

The identity of the person or persons behind the site is not known (the copyright at the bottom just says "NEW WORLD ORDER MEDIA") but we suspect they might be Canadian since they are also running journaldemourreal.com on the same Google Analytics account and that site is is in French and has "QUEBEC GOLD MEDIA" in the copyright message.

Whoever is behind the sites: don't get fooled by the stories. Always use Google or another search engine first before sharing something on social media, just to be sure.