Liberals sure are afraid of Roy Moore. Not only did they push a woman in front of the cameras to cry and lie about some stuff that allegedly happened 35 years ago she's just now remembering to mention (we refuse to repeat the salacious allegations because they are 100% verifiable fake news) but when the fake 14-year-old didn't work for them, the Democrat Party did something even worse: they doubled down on the story, introduced a new actress, and had her tell an even more horrible lie.

Fiona Dourif says she was 11 years old when Moore "groped her in the alley behind the" church they both attended in 1957. "It was the most horrifying moment of my life," she told MSNBC's Rachel Maddow on Friday night. She then described the series of events that allegedly happened, including the obviously false allegation that he baited her into the alley with candy. "Roy Moore definitely did all of those things and more," she said looking into the camera, dry-eyed.

According to the Washington Post Roy Moore has indeed been the subject of sexual assault allegations by several woman (including an underaged one). As reported by The Guardian Moore denies knowing the underage woman and has claimed he has been the victim of a conspiracy.

The story about "Fiona Dourif" definitely isn't true. In 1957 Roy Moore would have been ten years old and it seems unlikely he would be baiting "older women" with candy at that age. Also Fiona Dourif is an actress best known for roles in two "Chucky" movies and Dirk Gently's Holistic Detective Agency. And she was born in 1981 so it would be unlikely Moore could have molested her in that year unless he had access to a time machine. She is definitely not working as Barack and Michelle Obama's housekeeper either as the article later claims. 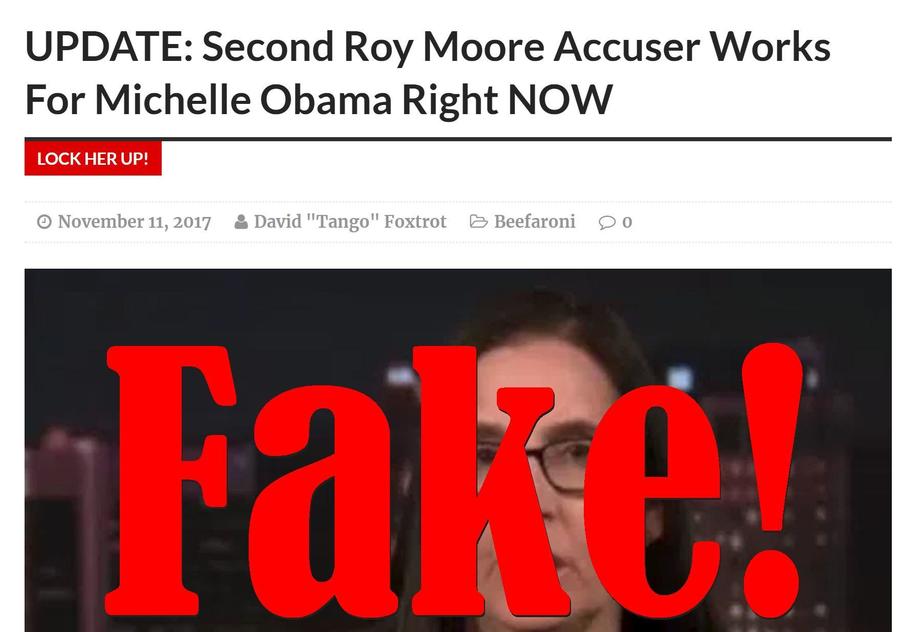 But the most important reason the story is fake is that The Resistance: The Last Line of Defense carries a satire disclaimer at the bottom of the page which reads:

ABOUT THE LAST LINE OF DEFENSE:

The crybaby, ivory tower elitists at Snopes have decided we don't qualify as satire, but we feel the disclaimer still needs to be as plain as the lack of Googling skills in conservative America: ________ sat·ire ~ˈsaˌtī(ə)r noun the use of humor, irony, exaggeration, OR ridicule to expose and criticize people's stupidity or vices, particularly in the context of contemporary politics and other topical issues. ________ Sorry, Snopes. Nowhere does it require that satire be funny or meet the standards of people with stickintheirassitis. Please stop "fact-checking" fiction with opinionated, emotionally charged hit-pieces and report the whole story, you cowards. ________ Nothing on this site is real. It is satire. Call it "fan fiction" if you prefer. If you want to see what it is REALLY about, join us on Facebook

The owner and main writer of the site is self-professed liberal troll Christopher Blair, a man from Maine who has made it his full time job to troll gullible conservatives and Trump supporters into liking and sharing his articles. He runs several other websites such as reaganwasright.com and godluvsamericamost.org. Sometimes he is also known under his nickname "Busta Troll".

Articles from Blair's sites frequently get copied by "real" fake news sites who often omit the satire disclaimer and any other hints the stories are fake. Blair has tried to get these sites shut down in the past but new ones keep cropping up. The current article has been copied by several sites already and is currently going viral.