Despite what you may have heard the top leadership of the U.S. Marine Corps have not warned their troops against participating in the so-called "Tide Pod Challenge". There is also no truth to the news that several marines ("less than 100" according to the story) ended up in hospital as a result of being poisoned when they ate Tide Pods while attempting the challenge. The entire thing was made up by satirical military-themed website Duffelblog and was meant to gently mock the Marines and their gung-ho attitude to everything.

The "Tide Pod Challenge" has been making headlines recently and is apparently a real thing according to Snopes. It consists of filming oneself while putting a Tide Pod (a packed of detergent meant for washing clothes) in the mouth and possibly biting down on it. This is generally a bad idea as it can cause poisoning. Tide itself came out with a clear warning against doing it:

What should Tide PODs be used for? DOING LAUNDRY. Nothing else.

Eating a Tide POD is a BAD IDEA, and we asked our friend @robgronkowski to help explain. pic.twitter.com/0JnFdhnsWZ

In addition YouTube has released a statement saying they were going to be removing any videos showing the challenge because these videos violate their community guidelines about showing activities with an inherent risk of physical harm. 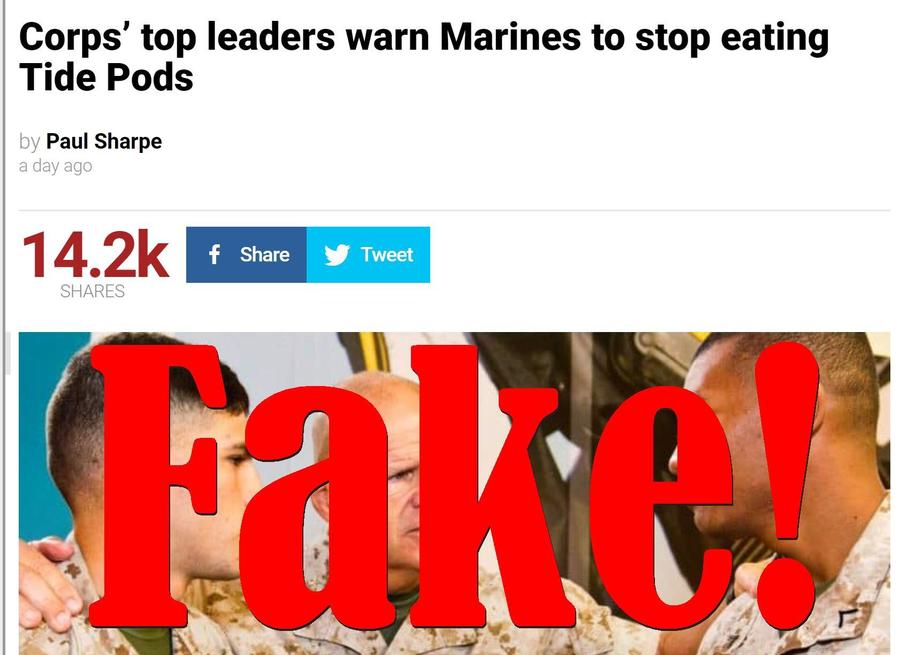 However the news that the Marines are engaging in the practice because they are up to any challenge is definitely fake news. The story (archived here) originated on the satirical website Duffelblog under the title "Corps' top leaders warn Marines to stop eating Tide Pods" and opened as follows:

WASHINGTON -- The Marine Corps' top leaders have warned junior troops to stop eating Tide Pods after a number of Marines have been hospitalized due to poisoning, sources confirmed today.

"I don't care what you guys do. Hell, you can even go back to drunken driving. Just stop eating laundry detergent, for Christ's sake," said Gen. Robert Neller, the Marine Commandant.

The DuffelBlog article got liked, shared and commented on at least 14,000 times already at the time of writing and there are probably several people who took it as real. But Duffelblog.com is a military-themed satire website which sports following legal disclaimer on its 'about' page:

So don't fall for any of their stories and don't eat any Tide Pods either. Rumors that this is healthy or cool are fake news too.