There is no truth to the story that Chuck Schumer received $500,000 in campaign donations from several pro-illegal immigration groups just before the vote on the budget that failed to pass, leading to the government shutdown. The groups "Immigration for Everyone", "Council for Alien Rights" and the "Southern Border Defense Fund" don't actually exist. The same goes for the transparency website "Glass Table" where the info supposedly came from. 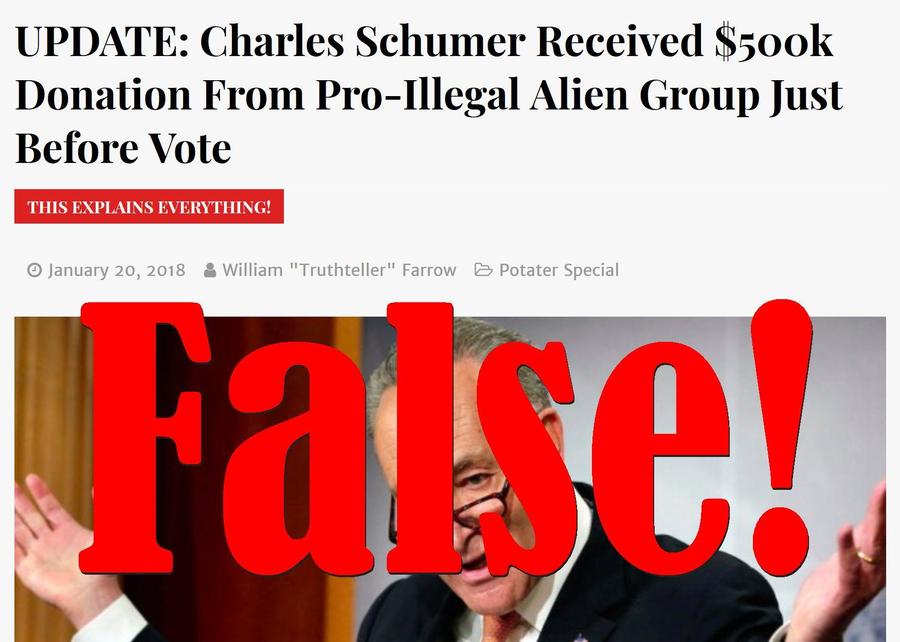 A fake story (archived here) that claimed these groups had made three separate campaign donations went massively viral on a website named USANewsCentral. However that website was only registered three months ago in October 2017 and it definitely is not a reliable news source. We know this because they copied the entire story verbatim from a satirical website named The Last Line of Defense where it was originally posted (archive) with the title "UPDATE: Charles Schumer Received $500k Donation From Pro-Illegal Alien Group Just Before Vote". The article began:

Democrat Senator Charles Schumer was willing to shut down the government and hurt millions of people while causing billions in economic damage over his desire to remove penalties for illegal aliens and open the borders, but have you wondered why?

An explosive report by The Gateway Pundit reveals that there may be a reason for his support beyond Schumer's purported love of Mexican criminals above our veterans and poor children. In fact, there is a reason. $500,000 of them in fact.

However the link to The Gateway Pundit just goes to the front page of that website and there is no article on that site making any claims about Schumer receiving such donations. The other link in the story, purporting to link to a transparency site named "Glass Tabletop" (which doesn't exist) actually goes to an image taken from a pornographic video featuring a glass table and a sex act.

All of that comes as no surprise to our regular readers, they know that The Last Line of Defense comes with a clear satire disclaimer at the bottom of each article:

Articles from Blair's sites frequently get copied by "real" fake news sites who often omit the satire disclaimer and any other hints the stories are fake. Blair has tried to get these sites shut down in the past but new ones keep cropping up and he keeps knocking them down. That is exactly what happened with this particular story although it is unusual that a copied story like this breaks 50,000 likes/shares/comments (with the original not even getting 3,000).