No, the FBI did not take a break from missing important clues about impending school shootings and chasing Russian bots to accidentally add Chadwick Boseman, Michael B. Jordan and Lupita Nyong'o to a watch list just because they played in a superhero movie called "Black Panther" that happens to sound similar to the "Black Panther Party", a revolutionary socialist organisation mainly active in the 1970's.

Origin of the rumor is a story on Reductress titled "Cast of 'Black Panther' Added to FBI Watch List" which was published on February 20th 2018 (archived here) which opened:

In response to a record-breaking premiere weekend, the FBI has added the cast of Black Panther to its domestic terror organizations watch list.

"It is our understanding that the cast of this film has raised over $235 million for their efforts to spread their black extremist message," said FBI director Christopher Wray. "That is not something that we can tolerate."

Sources report that A-list celebrities Chadwick Boseman, Michael B. Jordan and Lupita Nyong'o have been added to the watch list, with little justification other than seeming "suspicious."

"It's an imperfect process," says one source within the FBI. "But if anything uses the words 'black' and 'panther' we're all over it." 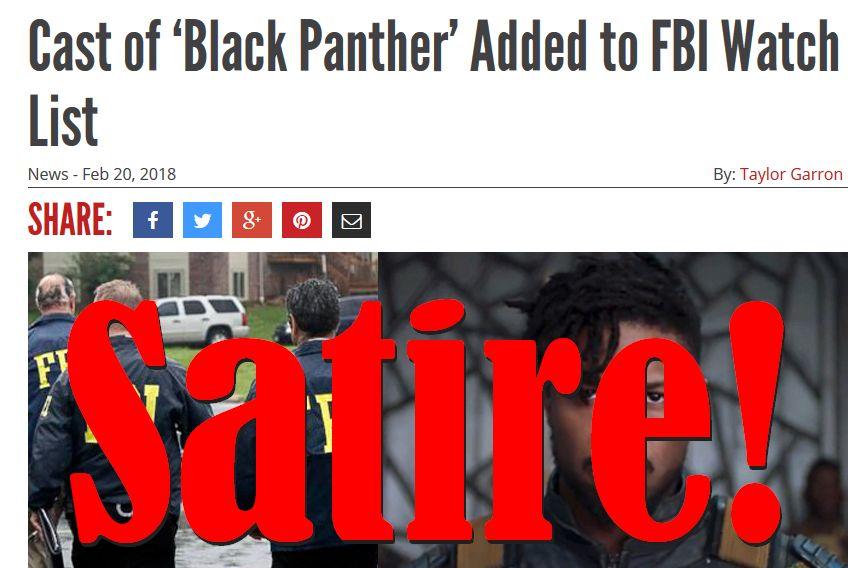 However the story is satire. Reductress is a site that bills itself on its about page as:

The first and only satirical women's magazine, Reductress was founded in 2013 by Beth Newell and Sarah Pappalardo. The mission of Reductress is to take on the outdated perspectives and condescending tone of popular women's media, through the eyes of the funniest women in comedy today. Also, we want people to think we're pretty.

This disclaimer can be hard to spot as you first have to click one of over 20 possible links in the site's footer before getting to it.