There is no truth to the story of gay man "William Frohlich" aged 34 of Alabma suddenly turning heterosexual after getting a vision of Hell during a near-death experience. The article that started the rumor originated on satirical website World News Daily Report on February 19th 2018 under the headline "GAY MAN TURNS HETEROSEXUAL AFTER SEEING 'GATES OF HELL' DURING NEAR-DEATH EXPERIENCE" (archived here) and it opened like this:

Prichard, AL | A homosexual man from Alabama has decided to become straight after he allegedly had terrifying visions of Hell after a near-death experience.

William Frohlich, 34, claims he has been haunted for weeks by horrifying visions of "demons" and "Hell" after he was electrocuted during home repairs which led his heart to stop beating for several minutes before paramedics intervened.

The hellish visions were so frightening that the 34-year-old software engineer has even left his boyfriend of 12 years in the process of "trying to turn heterosexual" and "leaving his evil ways behind."

The man in the picture used to illustrate the story is not "William Frohlich" (who does not exist). "Frohlich" is German for "cheerful" or "merry" or in other words "gay". The man pictured is actually white nationalist Christopher Cantwell who published a video of himself crying and sobbing after learning he might potentially be arrested after the Charlottesville riots in 2017 in which he was involved. The photo appears to be a screenshot taken from that video.

We located a copy of the video on YouTube, you can watch it below: 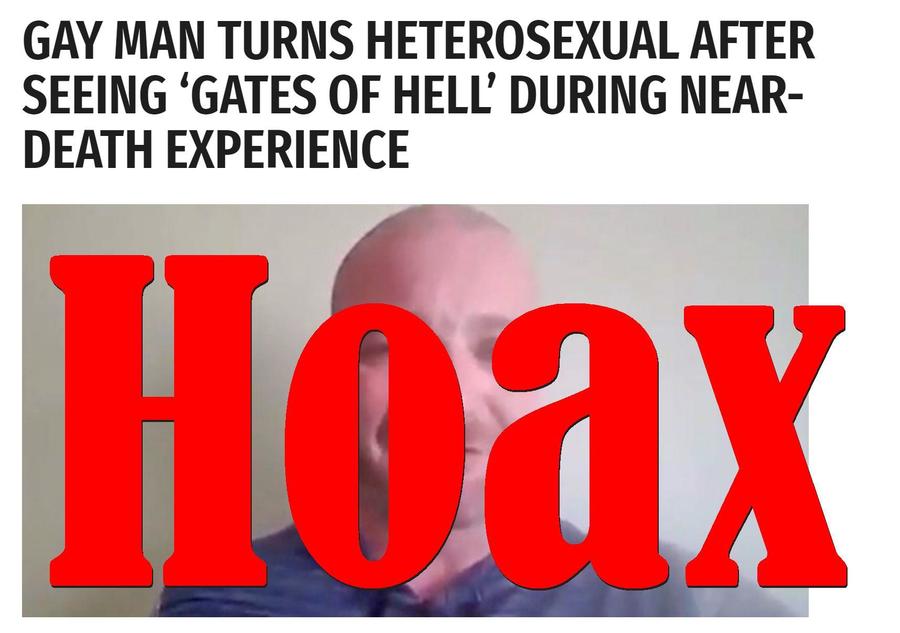 The website World News Daily Report is a well known satirical website specialized in posting hoaxes and made up stories. The disclaimer on their website is pretty clear about that even though you have to scroll all the way down the page to find it:

It is run by Janick Murray-Hall and Olivier Legault, who also run the satirical Journal de Mourréal, a satirical site spoofing the (real) Journal de Montéal. Stories from the site are frequently copied by other sites without attribution and with the satire disclaimer omitted. If you saw this story on one of these sites don't hesitate to report it.