In a familiar pattern well known hoax website YourNewsWire has taken a rumor from two years ago and turned it into a definite statement of fact with an article titled "Obama Announces Bid To Become UN Secretary General" which was published February 23rd 2018 (archived here). The article opened:

Barack Obama has announced plans to become secretary general of the United Nations, allowing him to advance his globalist agenda on the world's stage.

According to Al-Jarida, Obama has no intention to step away from the spotlight, much to the dismay of other world leaders such as Israeli Prime Minister Benjamin Netanyahu:

Israeli Prime Minister Benjamin Netanyahu reportedly is planning payback for President Obama's dismissing Mr. Netanyahu's objections to the Iran nuclear deal last year. Mr. Netanyahu is said to be rallying moderate Arabs to thwart Mr. Obama's bid to become the Secretary-General of the United Nations after he leaves the White House next year.

Mr. Obama has already discussed the issue with Republican, Democratic and Jewish officials in the United States, according to Kuwaiti newspaper Al-Jarida.

The Al-Jarida story was first reported about in English by Israel National News in 2016 and they described it as:

The report, which admittedly appears somewhat far-fetched, has not been confirmed by any other news outlets and does not name any of its sources.

So we have an unsourced report from 2016 and no actual Obama announcement: we have been unable to find any record of a press conference, press release or even a Tweet by Obama in which he announces this "news". 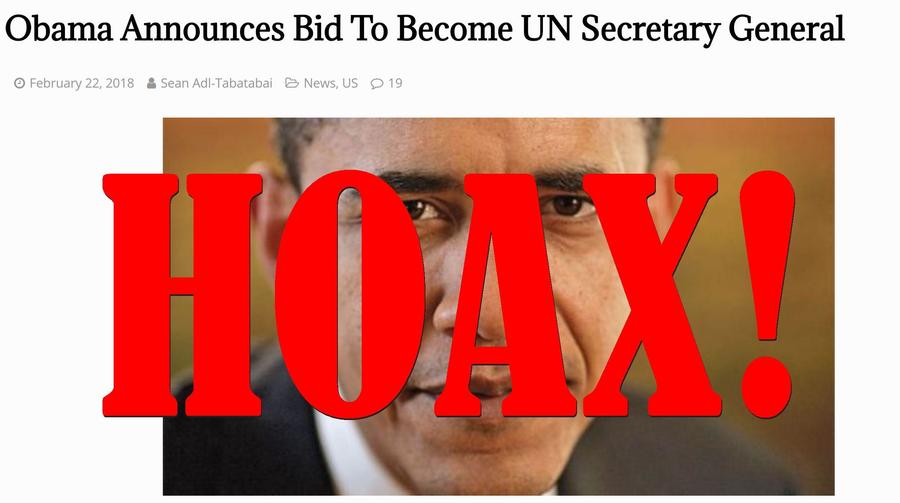 That shouldn't come as a surprise to people who know how the Secretary General of the UN gets selected (like Obama undoubtedly does). As Wikipedia helpfully explains:

Unofficial qualifications for the job have been set by precedent in previous selections. The appointee may not be a citizen of any of the Security Council's five permanent members.[4] The General Assembly resolution 51/241 in 1997 stated that in the appointment of "the best candidate", due regard should be given to regional (continental) rotation of the appointee's national origin and to gender equality,[5]:5 although no woman has yet served as Secretary General.

In other words, the only way for Obama to be nominated for the job is either via President Trump's representatives at the UN or through a nomination coming from some other country that is currently a member of the security council like Russia, China, France or the United Kingdom. And even in that very unlikely case it is even less likely that the General Assembly would approve it since Obama is clearly not from a "middle power". And even if he managed to clear that hurdle somehow against all odds, how likely is it that Trump would not simply use his veto power to block the appointment?

Obama knows this. The writers at YourNewsWire know this. They are just counting on enough people not knowing about all of this so their sensationalist article based on a two year old rumor from a Kuwaiti newspaper can go viral anyway. So far it seems to be working with the article having surpassed 12,000 engagements on Facebook already.