Did you hear about White House directives ordering up military plans for a massive roundup of privately-owned guns between November 7th and December 13th? And that it would be called "Operation PREAKNESS"? None of it is true.

The rumor started with a post on military satire website Duffel Blog from 2013 (archived here) which briefly went viral again on February 28th 2018. The article was titled "Military Drawing Up Plans For Nationwide Gun Confiscations" and opened:

WASHINGTON, DC - A senior U.S. general has confirmed that the military has secretly drawn up plans to round up large numbers of privately-owned firearms from American gun owners.

Gen. James M. Scott of the U.S. Air Force confirmed that the Pentagon received a series of formal directives from the White House between November 7 and December 13 to begin plans for a massive nationwide operation to confiscate guns using a series of federal databases compiled over the last few decades.

The article continuee by explaining the plans were drawn up in conjunction with the United Nations, Senator Dianne Feinstein, and several other liberal organizations such as the National Organization for Women, Planned Parenthood, Greenpeace, the American Federation of Labor, and even the National Rifle Association(!).

It even pointed out that all of this was made possible by changes to the Posse Comitatus law that were tucked away on "page 2131 of the ObamaCare Act".

If all these clues didn't tip you off the story was satire perhaps the name of the author will: "G-Had" does sound a lot like "jihad"... 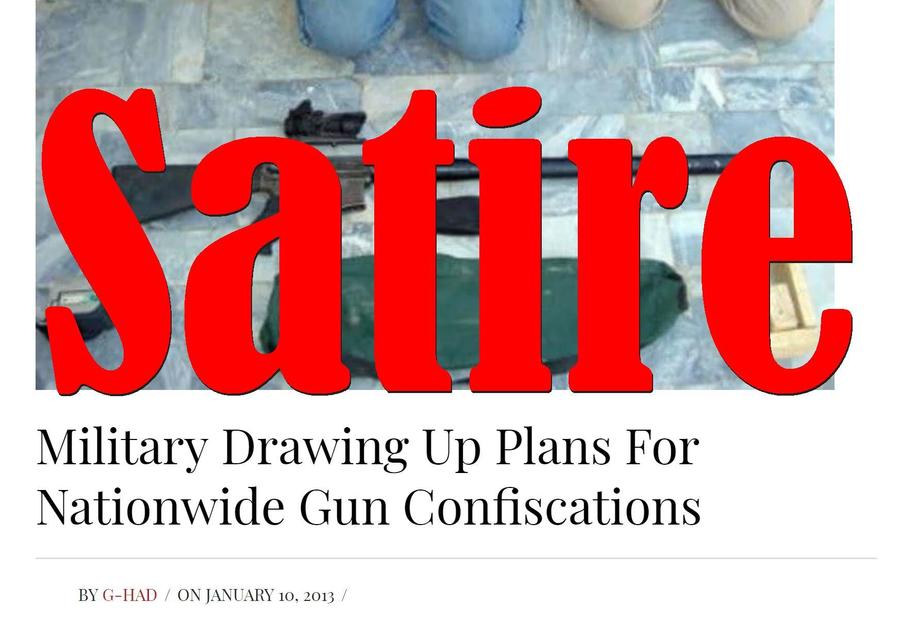 The story went viral again after Duffel Blog reposted it on their Facebook page: