An article on YourNewsWire claims Pope Francis has "forgiven" the oddly specific number of 4,444 pedophile priests in Australia. As usual with articles on that site the headline "Pope Francis Forgives 4,444 Pedophile Priests In Australia" bears only limited resemblance to what really happened. It was published originally on February 27th 2018 (archived here) and opened:

An inquiry in Sydney has uncovered evidence that Pope Francis has forgiven and covered up the crimes of 4,444 pedophile priests in Australia.

The Austrailian commission reported that not only were the priests forgiven by the Vatican for their crimes, allegations were "swept under the carpet" and never reported to law enforcement.

Most of the article seems to be copy-pasted together from bits of a DW article (which is properly quoted as the source) about an inquiry in Sydney about sexual misconduct by Catholic priests between 1950 and 2010. It would be hard for Pope Francis to have turned a blind eye towards this since he has only been pope since 2013. He is not even mentioned in the source article (and the only mentions in the WND story are in the title and first sentence which basically invents the "forgiving" claim which is not backed up by any evidence or source material). 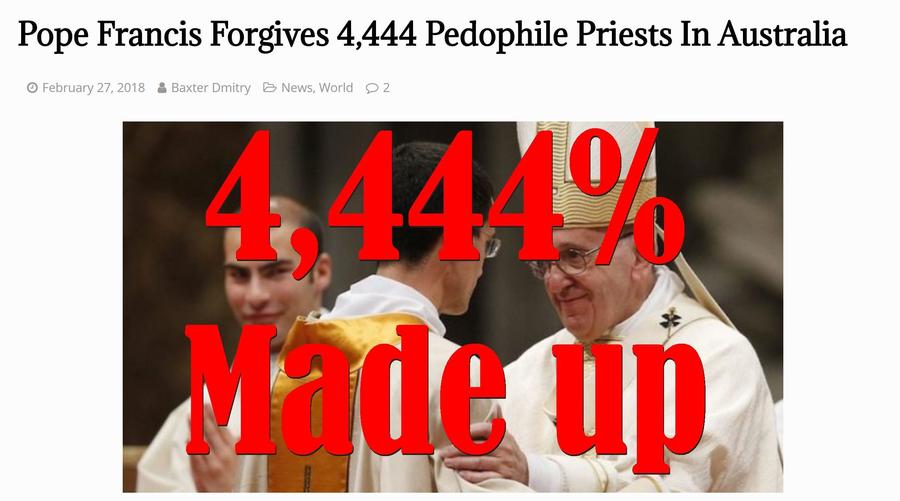 Furthermore the original story talks about 4,444 "incidents" over a 60-year period, not 4,444 priests. It does list a number of alleged perpetrators though:

The inquiry found that about 90 percent of the 1,880 alleged perpetrators were men, and the victims averaged around age 10 for girls and 11 for boys.

Note, that's "alleged" perpetrators. And it notes 10% of them are not even men which means they can't have been priests since the priesthood in the Catholic Church is reserved for men. Even assuming all the allegations are true and none of the accusers are lying that still means WND more that doubled the real number.

The source article ends on this note:

Of the 300 cases referred to police throughout the course of the four-year investigation, only 27 prosecutions have been able to move forward, with 75 more pending.

It is not clear if that means the accused were found innocent in two thirds of the cases or if prosecution simply wasn't attempted because the alleged facts happened too long ago or the perpetrator already passed away.

But it seems pretty clear Pope Francis has nothing to do with the whole thing and the number "4,444" is wildly inaccurate.