Did you read the story about the two priests in Santiago de Compostela in Spain who were arrested after they put weed in the thurible? It is not true: it originated on a Spanish satire website. (If you didn't know: a thurible is a vessel suspended by chains that is used to burn incense during various Christian worship services.)

The story got popular after an English version titled "2 Priests Arrested After Putting Weed Into A Thurible" appeared on a website named "8SHIT" on February 18th 2018 (archived here) which opened:

What started as, apparently, a simple joke, has ended up with two priests arrested after they were caught putting weed into the botafumeiro of the Santiago de Compostela Cathedral.

The original Spanish version of the story appears to have come from a Spanish satirical website named "Hay Noticia" (= "There is news"). 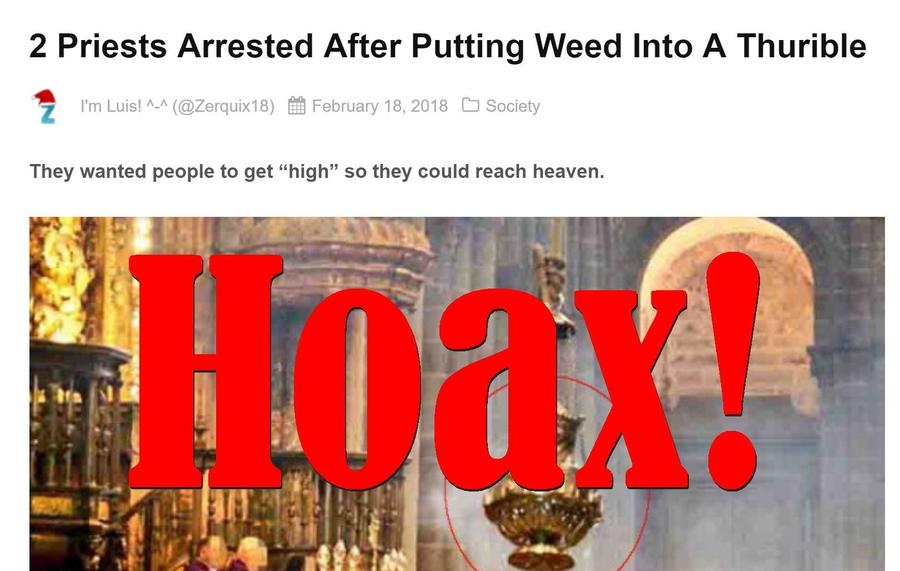 The cathedral in Santiago de Compostela is famous for having the largest thurible in the world, named the "Botafumeiro". You can see it in action in this video:

But there definitely wasn't any marijuana in it. The article was posted in the "Society" category and 8shit.net has a disclaimer at the bottom of the page that reads:

8Shit is a satire news and humor website. All its content is fiction (except those posts under the "serious" category) and shouldn't be taken as real. All references, names and marks or institutions in this website are used as contextual elements, like in any novel or science-fiction story.

Sorry to disappoint those of you who were already considering going on a pilgrimage to Santiago de Compostela because of this article...