No, Alan Meyers, an electrician and father of two from Dyersburg, Tennessee did not abandon his wife and children to go live naked in the woods because he believes himself to be a (transspecies) squirrel. If you read an article about that somewhere and you believed it you were taken in by a satirical website.

The story originated with an article published on World News Daily Report under the title "Transspecies man abandons family to live naked in the forest as a squirrel" on March 1st 2018 (archived here) which opened:

A man who describes himself as an "animal stuck inside a human body", has decided to abandon his wife and children to live the life of a squirrel in the woods.

Alan Meyers, an electrician and father of two from Dyersburg in Tennessee, has always described himself as a squirrel stuck in a man's body and has been for years a militant of the transspecies movement.

Mr. Meyers was diagnosed with a condition called clinical lycanthropy, a rare psychiatric syndrome that involves a delusion that the affected person can transform into, has transformed into, or is a non-human animal.

We haven't been able to definitively identify the man in the picture but it appears to be taken from following stock photo which has been around since at least 2008: 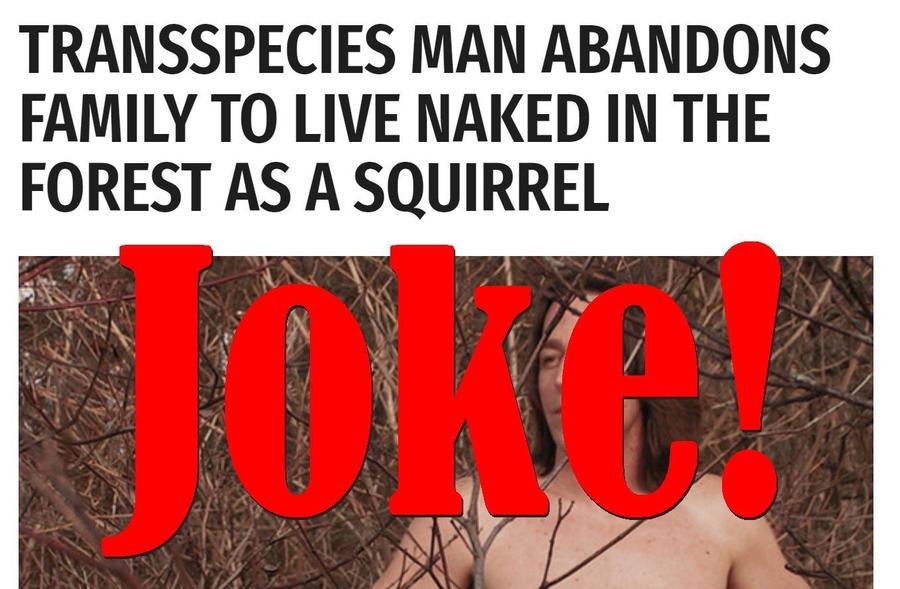 The website World News Daily Report is a well known satirical website specialized in posting hoaxes and made up stories. The disclaimer on their website is pretty clear about that even though you have to scroll all the way down the page to find it:

It is run by Janick Murray-Hall and Olivier Legault, who also run the satirical Journal de Mourréal, a satirical site spoofing the (real) Journal de Montéal. His stories often get copied by "real" fake news sites without attribution and with the omission of the satire disclaimer, causing many people to believe the story is real. Or folks might just see the story on social media where there is no obvious indication the article is just a joke:

A man who describes himself as an "animal stuck inside a human body", has decided to abandon his wife and children to live the life of a squirrel in the woods.