All of that is a serious misrepresentation of what actually happened. The story that used all these headlines was published on a site named Conservative Daily Post on March 1st 2018 (archived here), and it opened:

Rhode Island's Democratic Governor signed an executive order allowing the federal government to seize firearms from the homes of individuals they deem are dangerous.

The measure, which satisfies just about everything on gun-grabbers' wish list, claims the government is legally allowed to determine which citizens should or should not have the right to bear arms.

Many would agree that a person with a mental illness should not have a gun, but Raimondo's executive order allows for the Rhode Island government to determine which individuals can have a gun.

This is not exactly a representation of what is in the actual executive order, which you can view in full here although the article body already tempers the headlines a bit. So apparently the measures to take away guns are just for people deemed "dangerous". But the article seems to imply the state can randomly apply that label to anyone just to take away their right to bear arms which is not true.

An executive order is not a law so it can't really create new rules that go against existing legislation. It is more like a set of instructions on how to organize and enforce the application of existing laws. The document starts with a long list of reasons (whereas... whereas...) before getting into the details of what the Governor actually ordered. We've quoted the most relevant part below (bold highlights are ours).

NOW THEREFORE, I, Governor Gina M. Raimondo, by the authority vested in me as
Governor of the State of Rhode Island and Providence Plantations, do hereby ORDER as
follows:
1. Strengthen Law Enforcement Response and Intelligence Sharing.
a. The Rhode Island State Police shall take all necessary and lawful steps to
promptly respond to and investigate, and support local police departments
in their response to and investigation of, any credible reports that a person
poses a significant danger of personal injury to themselves or others ("Red
Flag Reports").
b. Factors that law enforcement may consider in assessing the danger posed by
the person include, but are not limited to, the following red flags:
i. Recent acts or threats of violence by the person against self or
others, including statements, videos, or photographs posted on
social media sites;
ii. A pattern of prior acts or threats of violence by the person against
self or others;
iii. The criminal history of the person, including arrests and
convictions for crimes of violence, whether felonies or
misdemeanors, and crimes involving domestic violence, stalking,
or harassment;
iv. Previous no-contact orders, restraining orders, or protective
orders issued against the person;
v. Unlawful or reckless use or brandishing of a firearm; and,
vi. Evidence of recent acquisitions of, or ready access to, firearms.
No one factor is determinative and law enforcement may consider any other
relevant and credible evidence.
c. The law enforcement investigation shall include, at a minimum:
i. A criminal background check;
ii. A request for information from the Rhode Island Fusion Center;
iii. An inquiry with the local law enforcement agency; and
iv. Personal follow-up with the individual in question, and to the
extent possible, with the reporter (tipster) and any family member
or cohabitant of the individual in question. Provided, however,
that a reporter's desire for anonymity or confidentiality shall not
preclude law enforcement investigation.
d. In all cases where the law enforcement investigation has concluded that
there is probable cause to believe that the person poses a significant and
imminent danger to him or herself or others, law enforcement shall take all
available legal steps, consistent with all applicable state and federal laws and
regulations, to:
i. Remove firearms from the person and/or the person's household;
ii. Refer or transport the person for appropriate medical or mental
health treatment and evaluation; and,
iii. Initiate criminal proceedings where appropriate.
e. The Rhode Island State Police shall share information about credible Red
Flag Reports with the Rhode Island Fusion Center and the law enforcement
agency for the city or town where the individual in question resides.
Additionally, where appropriate and to the extent authorized by law, law
enforcement shall share the information with the local school department
and the Department of Children, Youth and Families.

So she is basically telling the cops to use all available steps which are already legal and come with plenty of safeguards like needing probable cause and required compliance with state and federal law in order to take away guns from people who "pose a significant and imminent danger to him or herself or others".

That's quite different from going from door to door to confiscate all guns like the headlines had you believe. So we are rating this one mostly false. 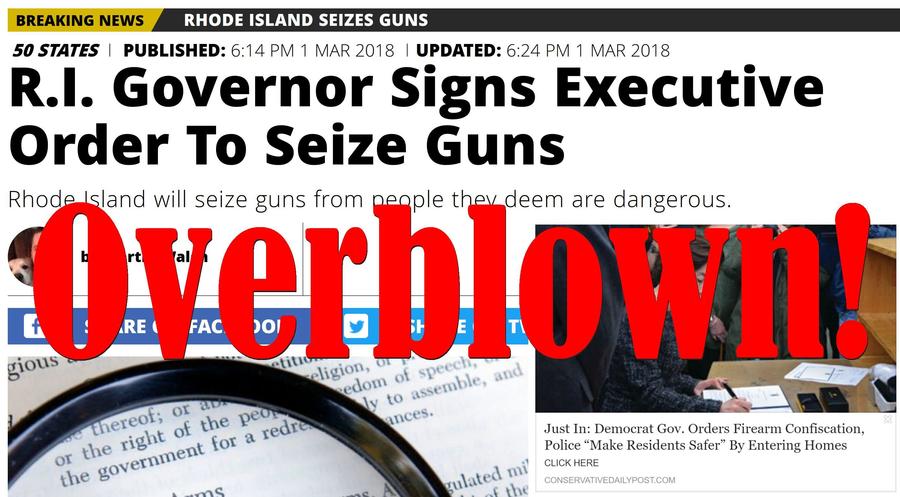