Is there a "48-Hour Challenge" urging children to disappear for two days spreading dangerously across social media? No, there is no actual evidence of such an online challenge, although there are a lot of parents, police and news media posting warnings.

Like the questionable Momo Challenge that purportedly triggered child suicides around the world, the 48-Hour Challenge is striking fear among adults stoked by media and parent postings share on Facebook. Lead Stories has followed the sourcing and the outcome of recent reports where there was speculation that missing children might have voluntarily gone into hiding after being exposed to the 48-Hour Challenge on Facebook. In each case, when the children were finally found there was no evidence it was related to the challenge.

One example is the disappearance of two Houston, Texas, middle school girls on Tuesday, February 26, 2019. The Daily Mail's headline read "Two missing girls aged 12 and 13 are found safe after vanishing while they walked to a Texas bus stop in feared instance of viral '48-hour challenge'." Mary Tran Le, 13, and Tianny Granja, 12, were found safe 48 hours after walking away from a school bus stop. While one of the girl's mothers told the Daily Beast that her daughter was "talking about the challenge the other day," Houston Police Officer Victor Senties told Lead Stories that investigators determined the girls did not run away because of a 48-hour challenge. Officer Senties would not give details about the actual reasons for the girls' disappearance because they are minors.
When 13-year-old Diana Clawson disappeared on Wednesday, January 23, 2019, in Rock Hill, South Carolina, media headlines suggested she ran away because of the 48-hour challenge. hiding under her own bed, surrounded by shoes, 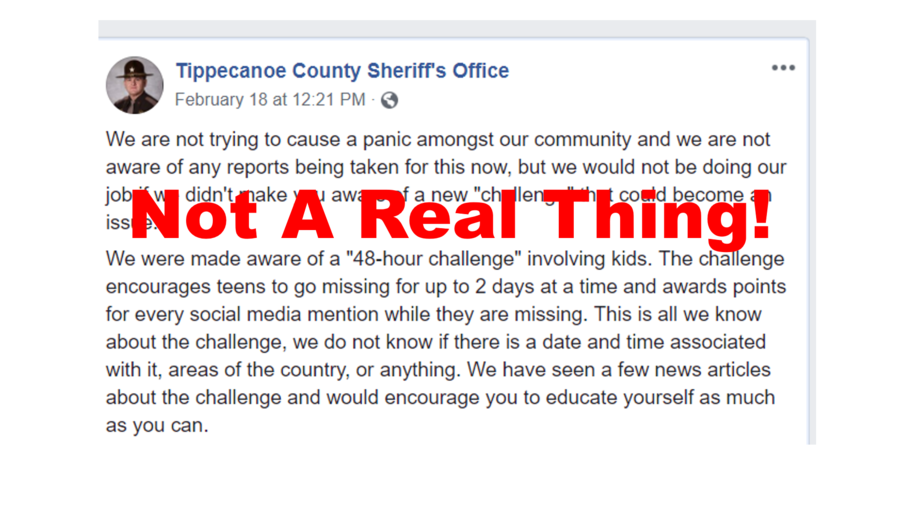 There are also many examples of police agencies issuing general warnings to parents about the threat of the 48-Hour Challenge, but in each case they note that they know of no cases of it happening in their jurisdictions. The sheriff of Tippecanoe County, Indiana, posted to Facebook on February 18, 2019, that he was "not trying to cause a panic" but that he would not be doing his job is he "didn't make you aware of a new 'challenge' that could become an issue. Sheriff Goldsmith concluded by saying "we have not had any reports of this nature."
The purported 48-Hour Challenge legend can be traced back at least to October 2017 and a story posted by Fatherly.com, a parenting advice website, titled "New Challenge Wants Kids to Pretend to Run Away From Home" -- calling it a "new Facebook trend in Britain" -- and a report from Northern Ireland's "Belfast Live" titled "Warning for parents as teens join in Facebook 'missing game'."
The Fatherly.com report cited no specific cases and named sources, other than attributing "Belfast Live." The Belfast story quoted an unidentified "County Derry mum" saying her 14-year-old son child disappeared "with others" for a time causing her" unspeakable" anxiety. The child was found 55 hours later in Ballymena, she said. While this unnamed mother complained about her son posting selfies from the police patrol car that returned him home, she did seem a tad proud of her lad as she told the website "I've been told my child and friends are in the lead in this competition because they managed to vanish for 55 hours before they were discovered."
Lead Stories has concluded after our research that the 48-hour challenge is more myth than reality, promoted more by parental worries than actual cases. The perception that it is a real threat can be a problem itself if it distracts from real cases of children disappearing as a result of abductions or running away for other reasons.