Does forming tinfoil into a sphere and microwaving it for 6 to 7 minutes cause it to smooth out and become shiny? No, that's not true: it will cause sparks and flashes and might even result in fire, despite what a viral image on the internet is claiming.

An example of the image can be seen in this post (archived here). We embedded it below: 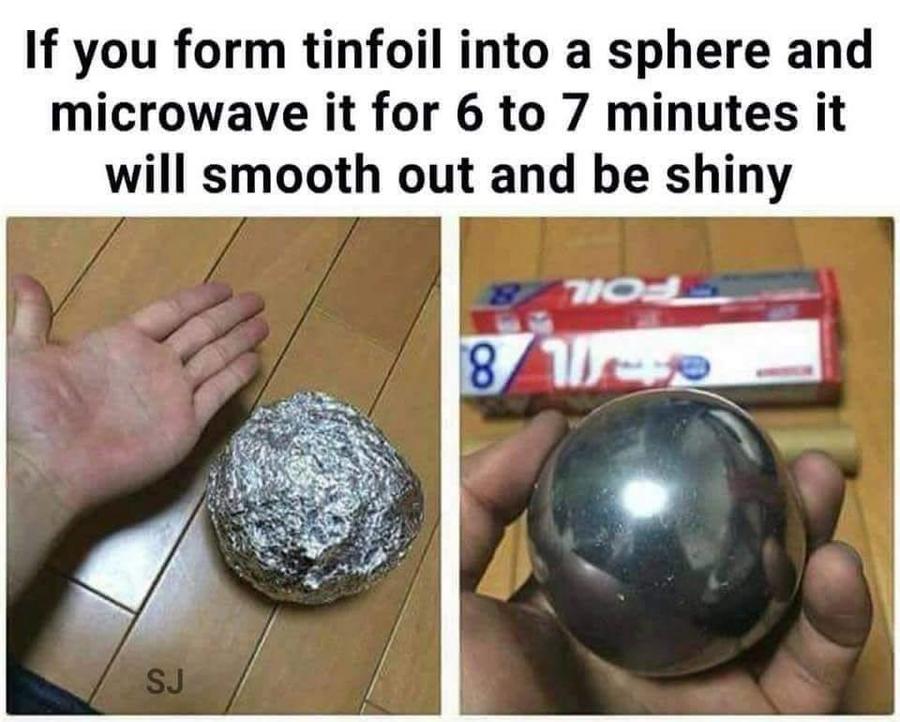 There are plenty of articles warning you about not putting tinfoil (or metal in general) in a microwave oven. The radio waves used by such ovens will cause electrical currents to start flowing through the metal or foil, leading to sparking and heating that might even cause a fire.

What if I put aluminum foil in the microwave?

The microwave oven is one of the great inventions of the 20th century -- you can find them in millions of homes and offices around the world. At one time or another, we've all been told not to use metal products, especially aluminum foil, when cooking­ with a microwave oven.

You can see this effect very clearly in this video:

Another video explains the origin of this meme:

Several people in Japan made shiny balls out of aluminum foil by hammering and sanding and polishing away for a long time. And then someone made an image claiming it could be done in a few minutes using a microwave oven, probably as a joke. The video suggests it originated with this tweet (archived here):

I just tried this. If you put a tight ball of tin foil in the microwave for a few minutes it turns into a real ball. Can't believe it actually worked pic.twitter.com/h32voZnya2

The creator distanced himself from any consequences the day after though:

Btw if you try this you're an idiot but also I'm not paying for your new microwave, house, or family

So don't try this at home!