Did Nancy Pelosi go on a "drunken rampage" that caused a plane with 243 other passengers to be grounded in Iowa? No, that's not true. The story was published by a liberal satire website that tries to educate gullible Trump supporters and Republicans about the need to actually click and read links before sharing or liking them in order to avoid being embarrassed by fans of the site later. All the events described in the article are not real.

Nancy Pelosi is drunk again, but this time she can't simply go home. First, she caused such a disturbance on a commercial flight from Denver to Southern California that the pilots had to divert and land in Iowa. Then, she managed to get herself lost.

Secret Service was completely flummoxed. The Speaker of the House had just...vanished...at 30K feet. As soon as the plane landed, the area was locked down so the plane could be searched, leaving more than 200 people sitting on a hot runway in Dubuque. After about an hour, Pelosi was found below deck in the luggage compartment, asleep with somebody's golden retriever.

The site is part of the "America's Last Line of Defense" network of satire websites run byself-professed liberal troll Christopher Blair from Maine and his partner in crime John Prager along with a loose confederation of friends and allies. Blair has been in a feud with fact checking website Snopes for some time now and has also criticized other fact checkers in the past who labeled his work "fake news" instead of satire. In reaction to this he has recently rebranded all his active websites and Facebook pages so they carry extremely visible disclaimers everywhere.

This story was no exception: it got picked up by a site named nbcnews.world which started spamming it into various conservative and Trump supporting Facebook groups, for example here: 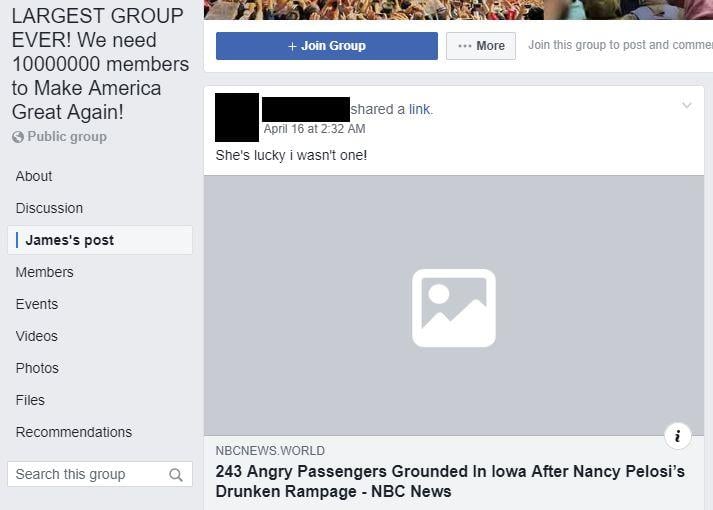 The site in question seems to have been taken down somewhere after April 24, 2019.