Did the Russian Navy find an extraterrestrial spaceship under the Arctic Ice? No, that's not true: a story making that claim does not point to any verifiable sources and the photo used to illustrate it actually shows the wreckage of a U.S. Navy F-14 Tomcat fighter jet, probably one that crashed into the sea in 2002.

The story recently appeared as an article published by Alien Blog on May 29, 2019 titled "Russian Navy Finds Extraterrestrial Spaceship Under Arctic Ice" (archived here) which opened:

Vladimir Prikhodko is the director of operations in the Russian navy. He recently said there was a joint operation between the United States, Germany, China and Russia in order to discover evidence of aliens. Besides that, the joint operation is also responsible for finding planets similar to Earth that could sustain life. Vladimir Prikhodko believes that in the beginning we should focus on underground, because there could be buried a lot of evidence. Since the beginning of the Second World War, Russia has dedicated itself to searching for extraterrestrial life. It seems that lately the Russian army made a lot of colossal discoveries demonstrating the existence of alien beings. One of these discoveries is the wreck of a UFO that was found in a deep pit of Antarctic ice. Apparently, near this alien ship there were caves where a lot of ancient glyphs were discovered.

This is the supposed photo of the "spaceship": 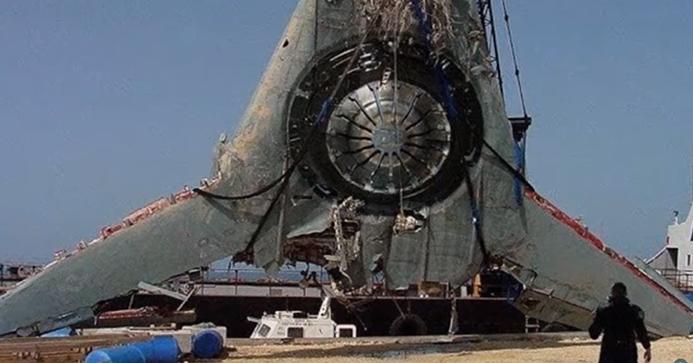 We found no trace of a Vladimir Prikhodko having anything to do with the Russian Navy. There is a (now deceased) French athlete by that name and also an actor listed on IMDB.

And the photo is definitely not an alien spaceship. A Flickr photo from 2002 appears to show the original, labeled F-14, Crete (archived here):

You can clearly see U.S. Navy markings on the left wing that have been blurred on the manipulated photo. The big circular thing in the middle seems to have been added too, along with the "shadowy figure" on the right.

An analysis by Isaak Koi (archived here) claims the manipulated image was created for a fictional video named "The Orion Conspiracy".

It is highly unlikely real aliens would fly around in U.S. Navy jets so we rate this claim false.