IMPORTANT NOTICE: Due to a technical issue at Facebook this fact check sometimes appears as an overlay on copies of the Second Amendment posted to Facebook (or Instagram). Note that Lead Stories did not rate, flag or label these posts, this was done by an automated process that we don't control and which obviously got it wrong. We have notified Facebook of the issue and they are in the process of fixing it.

A free people ought not only be armed and disciplined. But they should have sufficient arms and ammunition to maintain a status of independence from any who might attempt to abuse them. Which would include their own government.

No, that's not true: the quote is only partially correct and frequently appears online on an image right below the (real) text of the Second Amendment, along with an exhortation to share it with friends.

An example of the image can be found in this post (archived here) where it was published on January 6, 2016 under the title "Im asking all my friends to share this. And to ask there friends to share as well". 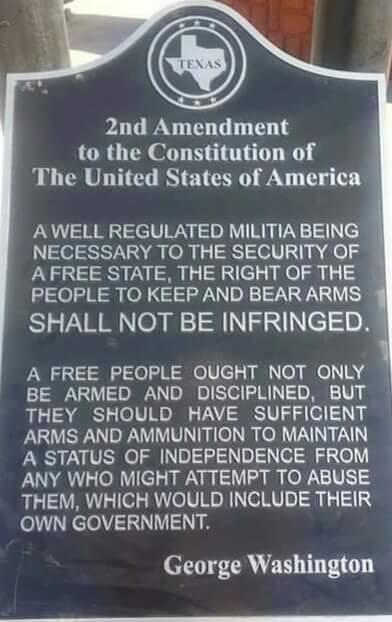 The part quoting the Second Amendment to the United States Constitution is accurate and correct.

Here's what they have to say about the quote:

This quote is partially accurate as the beginning section is taken from Washington's First Annual Message to Congress on the State of the Union. However, the quote is then manipulated into a differing context and the remaining text is inaccurate. Here is the actual text from Washington's speech:

"A free people ought not only to be armed, but disciplined; to which end a uniform and well-digested plan is requisite; and their safety and interest require that they should promote such manufactories as tend to render them independent of others for essential, particularly military, supplies."

The rest of the speech does not mention "independence" from "abuse" from their own government or from anyone else.

Several other fact checkers have also found issue with the quote:

Did George Washington Want Citizens Armed Against the Government?

In January 2016, a quote attributed to first U.S. president George Washington, about the importance of an armed citizenry, started recirculating on the internet: This statement had been making the online rounds for several years, but it regained popularity in January 2016 after President Obama announced new measures on gun control.

Note that this emphatically does NOT mean fact checkers (or Facebook) have found issue with the text of the Second Amendment, the problem is with the fake George Washington quote. Surely the first President deserves better than to be endlessly misquoted?