Is Michelle Obama to become the new face of Victoria's Secret? No, that's not true. The story was published by a liberal satire website that tries to misleadTrump supporters and Republicans into sharing made up stories that are clearly marked as satire when you actually click them. Articles from the site are frequently copied by foreign-run fake news websites. The people liking and sharing these stories are enriching foreign website operators (or a liberal from Maine) via the ad revenue generated with the content which is probably not what they expected or wanted.

The story originated from an article published by Obamawatcher on October 16, 2019 titled "Michelle Obama To Be New Face of Victoria's Secret" (archived here) which opened:

In the world of women's fashion, Victoria's Secret is a juggernaut. Earning billions last year from their mail-order and internet sales, along with their successful retail store franchises, it's a company that constantly dominates the Fortune 500. And now, First Lady Michelle Obama will be the public face of that institution.

In a contract rumored to net her upwards of eleventy-three million dollars a year, the bestselling author will be featured in print, television, and Facebook advertisements, as well as live chats and meet and greets at various outlets. Company spokesperson Mona Rounddick explained why Obama was the top choice :

"She's powerful, successful, strong, intelligent and sexy - everything we want Victoria's Secret to represent. Except urging kids to eat broccoli. We're just gonna keep that part on the down low. The campaign is gonna be massive, and we certainly hope that conservatives, who think it's a funny joke to pretend she's transgender will see it everywhere and tear off their own penises." 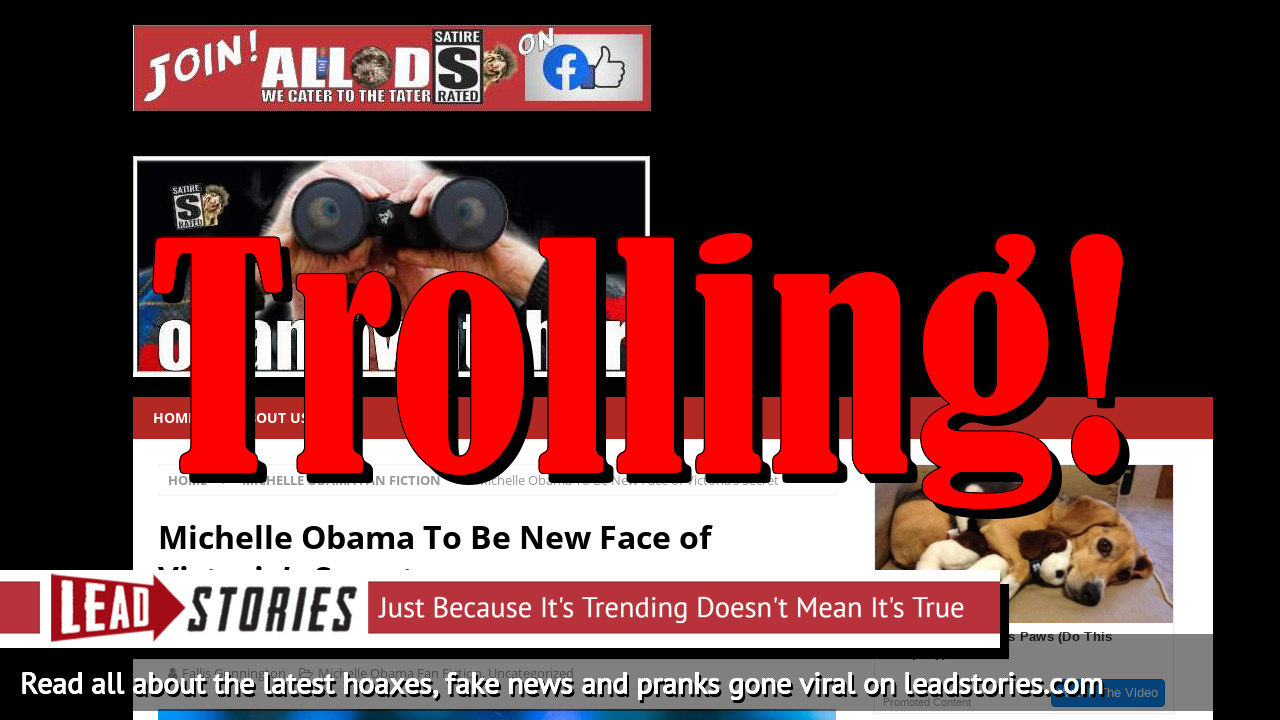 Michelle Obama To Be New Face of Victoria's Secret

In the world of women's fashion, Victoria's Secret is a juggernaut. Earning billions last year from their mail-order and internet sales, along with their successful retail store franc...

The story was posted in the category "Michelle Obama Fan Fiction" and the site is plastered with satire warnings and disclaimers. Anyone with two brain cells who reads the article quickly notices the story is one big joke. That hasn't stopped several foreign-run fake news sites from copying it though, hoping to catch some advertising dollars by reposting it into various conservative groups and pages on Facebook.