Did LeBron James tell the NBA in a letter from his lawyer that he will quit playing if the National Anthem continues to be played? No, that's not true. The story was published by a liberal satire website that tries to mislead Trump supporters and Republicans into sharing made up stories that are clearly marked as satire when you actually click them. Articles from the site are frequently copied by foreign-run fake news websites. The people liking and sharing these stories are enriching foreign website operators or a liberal from Maine via the ad revenue generated with the content which is probably not what they expected or wanted.

The story originated from an article published by BustaTroll on October 24, 2019 titled "LeBron To NBA:'Dump The Anthem Or I'll Quit'" (archived here) which opened:

his past Tuesday, the NBA's LeBron James created quite a scene and angered millions when he angrily walked off the court during the playing of our national anthem. This was his 'protest' it seems, the next stage of disrespect that began with kneeling in the NFL.

Now James is stepping it up even more. Yesterday, Joseph Barron, Esq., a lawyer for James hand-delivered a letter to the offices of the NBA advising them of his client's intention to end his basketball career if the anthem were to be played in his presence ever again. 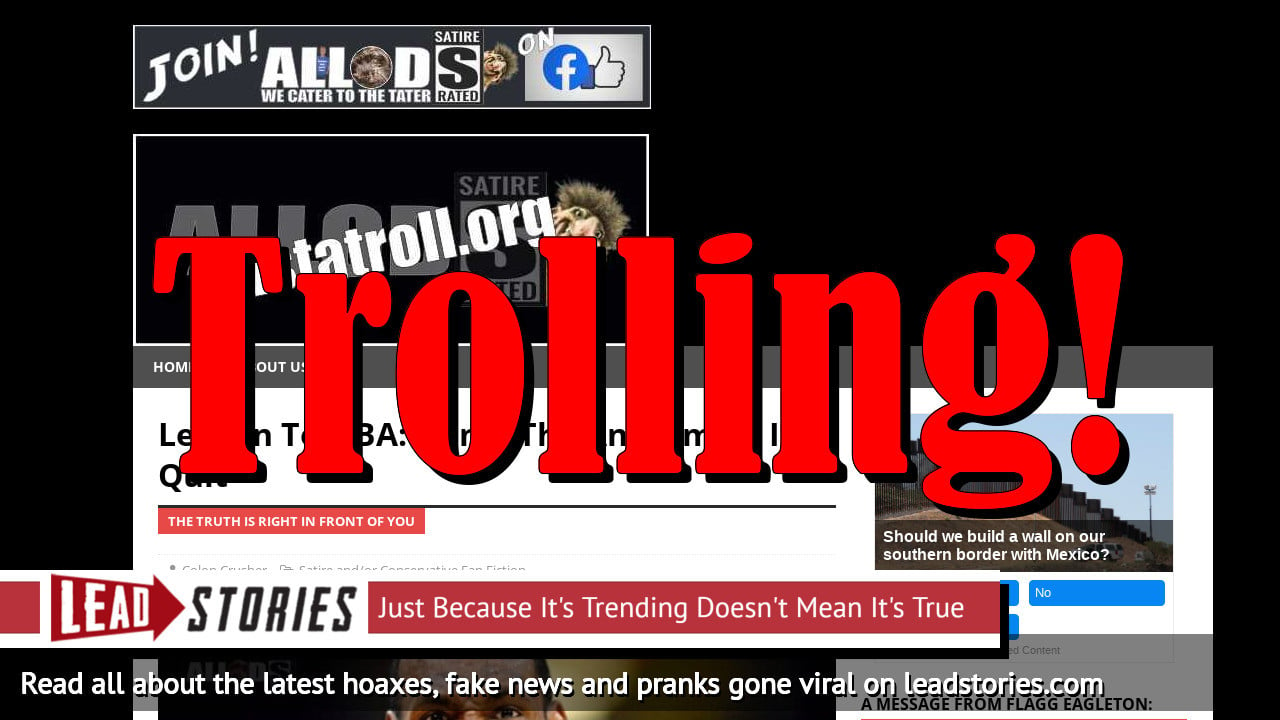 LeBron To NBA:'Dump The Anthem Or I'll Quit'

This past Tuesday, the NBA's LeBron James created quite a scene and angered millions when he angrily walked off the court during the playing of our national anthem. This was his 'protes...

The original article is covered in satire warnings and disclaimers and it was posted in a category named "Satire and/or Conservative Fan Fiction". The supposed letter LeBron's lawyer sent to the NBA was signed "LeBron Earnest James" while LeBron James full name is actually "LeBron Raymone James Sr." (and the name of the lawyer, "Joseph Barron", is often used for character names in the stories on the site, just like the name "Joe Barron").

LeBron did come under some anthem-related criticism recently:

NBA superstar LeBron James is facing fierce backlash for what critics are insisting was "disrespecting" the "Star-Spangled Banner" on Tuesday amid the fallout of his China comments. In a clip shared by NBA on ESPN, James was seen pumping up the crowd toward the tail end of the National Anthem ahead of the Lakers game against the Los Angeles Clippers.

But the story of the lawyer and the letter to the NBA was completely made up by the writer at BustaTroll.org.