Is Ilhan Omar married to a Somali man named B'oom B'oom? No, that's not true: The man in the photo is Lawrence Hilton-Jacobs, an American actor who played the role of Freddy 'Boom Boom' Washington in the popular TV series Welcome Back, Kotter from 1975- 1979. The story was published by a liberal satire website that tries to mislead Trump supporters and Republicans into sharing made up stories that are clearly marked as satire when you actually click them. Articles from the site are frequently copied by foreign-run fake news websites. The people liking and sharing these stories are enriching foreign website operators or a liberal from Maine via the ad revenue generated with the content, which is probably not what they expected or wanted.

The story originated from an article published by Bustatroll.org on November 4, 2019 titled "Omar Still Legally Married In Somalia,Voiding Her Citizenship" (archived here) which opened:

Word has been delivered from a member of the Somalian government that Democrat Representative Ilhan Omar still has a husband, whom she did not divorce, residing in that country. The reason this information is significant is because, if this true - and it obviously is - it would mean that her marriage that took place here in the USA is void and that, by not declaring her already existing marriage, so too is her citizenship as a result of this fraud, which was a criminal act.

State Department representative, Joeb Arron, discussed with us the further implications of the situation:

"If the allegations leveled against Mrs. Omar prove to be true, she would face, not only loss of citizenship, but a jail sentence of up to 15 light years, and deportation back to Somalia upon her release. Once there, she would likely again be incarcerated as her husband, B'oom B'oom, holds a great deal of influence there and is quite upset that his wife - a 15 year marriage at the time of her exit from the country - left him so suddenly, embarrassing him in front of The Hors Ha'ck, which is the Somalian parliament.
The investigation into the alleged crime is already under way." 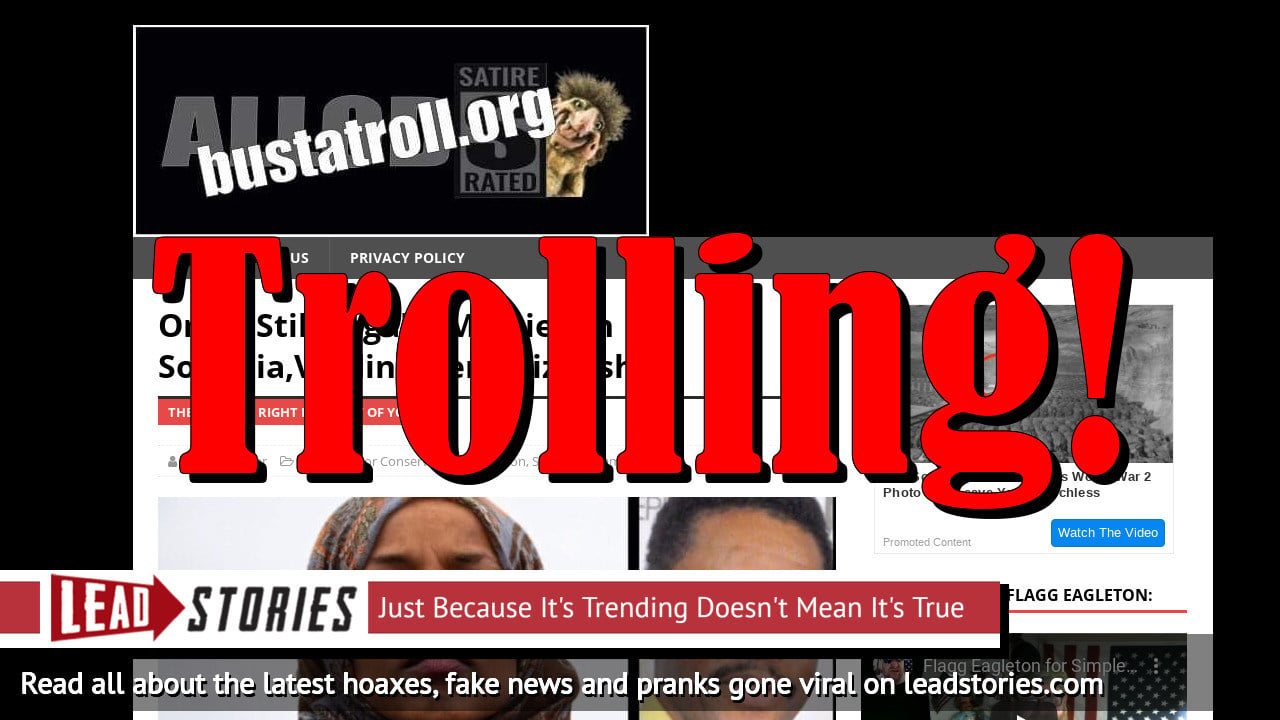 This article was written by the pseudonymous author Colon Crusher under the heading, "Conservative Fan Fiction, Satire for Islamaphobes." The fictitious story about Ilhan Omar's first husband, and the logic-defying claim that she left a 15-year marriage when she left Somalia (she was only six years old when her family left) finishes with a photo of the Welcome Back, Kotter cast and a caption suggesting the show may be making a comeback.

This story has already been partially copied by Politicodailynews.com (archived here)
https://politicodailynews.com/omar-still-legally-married-in-somaliavoiding-her-citizenship/
and was republished without any of the original satire warnings, Colon Crusher's byline, or the photo of the cast of the TV show. This makes it less likely that a casual reader would notice the remaining silly incongruities in the text or the satirical intent.

Bustatroll.org is part of the "America's Last Line of Defense" network of satire websites run by self-professed liberal troll Christopher Blair from Maine along with a loose confederation of friends and allies. Blair has been in a feud with fact-checking website Snopes for some time now and has also criticized other fact checkers in the past who labeled his work "fake news" instead of satire. In reaction to this he has recently rebranded all his active websites and Facebook pages so they carry extremely visible disclaimers everywhere.