Did researchers confirm that babysitting your grandchildren can make you live longer? Yes, that's true: Researchers in Germany and Australia conducted research that suggests a link between providing care for grandchildren and a longer life expectancy.

The story originated from an article (archived here) published by thelaughclub.net on October 30, 2018, under the title "Researchers confirm: Babysitting your grandchildren makes you live longer". It opened:

"Grandkids are god's gift for not killing your children," this old saying is not meant to be taken seriously. However, we can agree that it's an amazing experience to be a grandparent.

The first time my daughter told me she and her husband were pregnant, I was so happy that I couldn't wait -- Caring for that little boy was like watching myself grow up.

Loving your children and grandkids comes naturally. It's fun to be a part of their everyday lives, even at old age -- and as long as I can keep up with their pace, I'm always going to insist on babysitting my grandchildren when I have the opportunity. 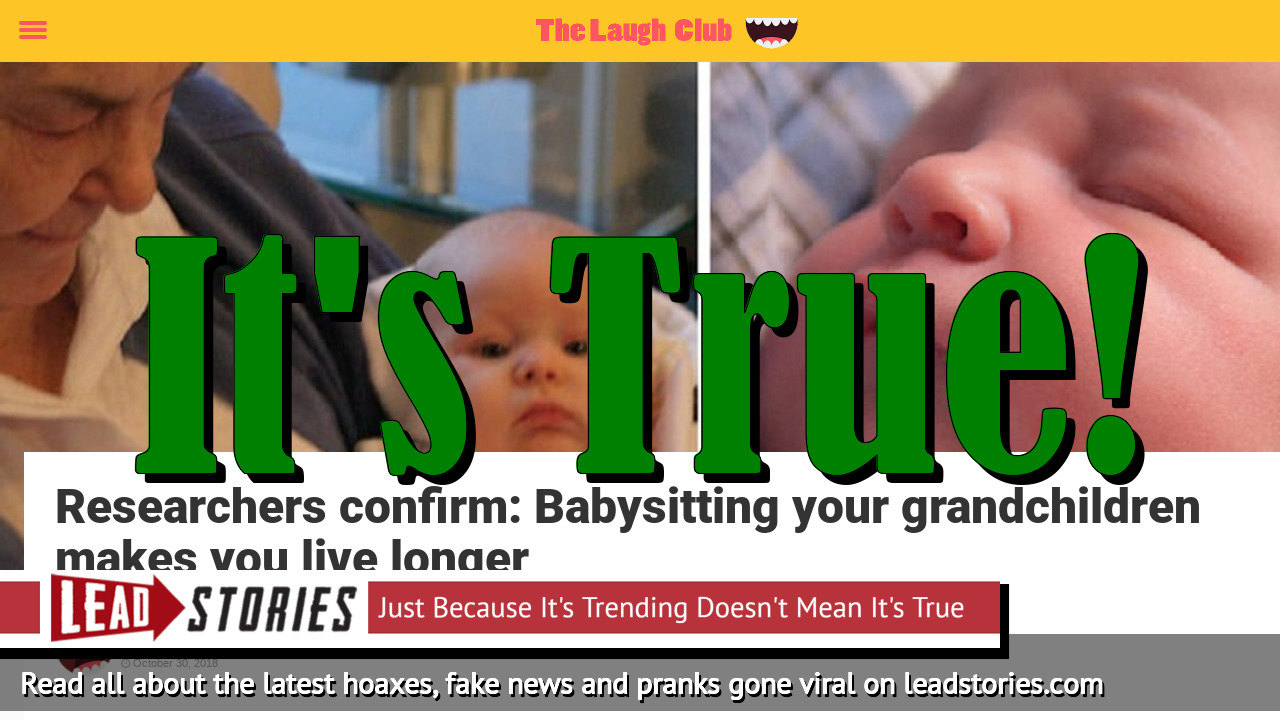 The story cited a report that was published in the journal "Evolution and Human Behavior," but it did not link to the specific article. Even so, the journal did publish a peer-reviewed study in May of 2017, titled, "Caregiving within and beyond the family is associated with lower mortality for the caregiver: A prospective study." (Note: to read the study, users may need to sign up for a free ScienceDirect account.)

Researchers conducted analyses on sets of data retrieved from the Berlin Aging Study, which is considered one of the largest explorations on old age and aging. It was conducted between 1990 and 1993 and closely examined the mental and physical health of a core sample of 516 people.

The new study's authors measured the support that grandparents in their sample gave to their grandchildren who were not in their primary care. The authors observed:

We consistently found that helping behavior was associated with reduced mortality. All helper groups - grandparents who gave care to their grandchildren; parents who provided instrumental help to adult children; and childless participants who helped others in their social network - had higher survival probabilities than the respective non-helper group. This pattern suggests that there is a link not only between helping and beneficial health effects, but also between helping and mortality, and specifically between grandparental caregiving and mortality."

The researchers believed their study was the first to demonstrate a link between grandparental caregiving and life expectancy.