Were 23 people killed and dozens injured at a Virginia pro-gun rally? No, that's not true: The protest on Monday was peaceful, according to media reports. The website that posted the story is known for creating satirical content and describes itself as "the most reliable source of fake news on the planet."

At least 23 people were killed at the white supremacist Second Amendment Rally in Richmond, Virginia today, authorities reported. Many more were injured. Details are forthcoming. UPDATE: Governor Ralph Northam has issued a statement condemning the senseless violence and the gun rights activists. 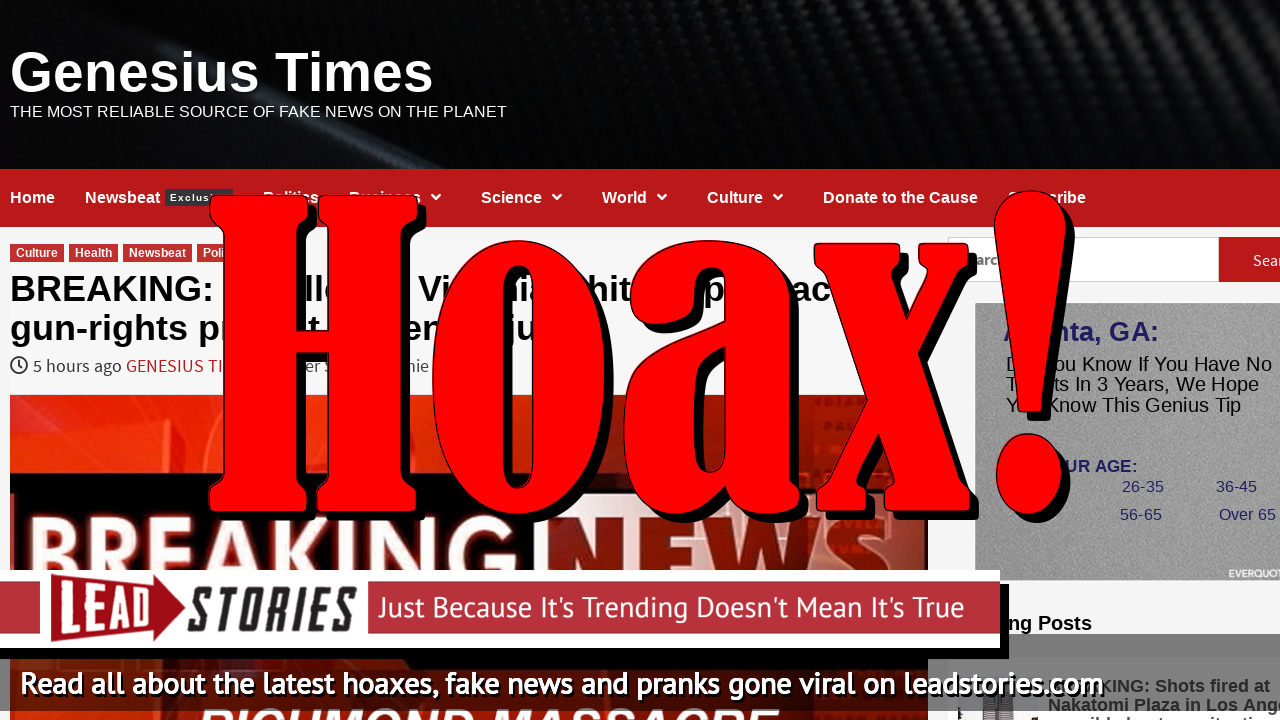 At least 23 people were killed at the white supremacist Second Amendment Rally in Richmond, Virginia today, authorities reported. Many more were injured. Details are forthcoming. UPDATE: Governor Ralph Northam has issued a statement condemning the senseless violence and the gun rights activists.

The story is a hoax. The author of the site, which purposely misspells Genius in its name, is made-up.

While thousands of people gathered in the state capital, Richmond, for the rally on January 20, 2020, the event ended with no reports of violence and only one arrest, according to The Washington Post.

The paper said a 21-year-old woman was charged with wearing a mask in public. It is illegal for anyone to conceal their face and identity in Virginia, a law stemming from the 1950s and efforts to unmask the Ku Klux Klan.

Concerns had been building online in recent weeks that the rally at the State Capitol would attract extremists, anti-government militia groups, and white supremacists - in addition to law-abiding gun owners who do not support those fringe groups. Law enforcement agencies had also gathered intelligence about possible threats of violence.

Those fears prompted Gov. Ralph Northam, a Democrat, to declare a state of emergency and place a temporary ban on weapons on the grounds of the State Capitol.

ABC News estimated 6,000 unarmed members held a rally outside of the legislative building. Another 16,000 armed activists stayed outside of the Capitol grounds.

The day after Democrats took control of the state legislature on November 5, 2019, Northam appeared on CNN and vowed to push new gun control measures. Ever since, disinformation campaigns and conspiracy theories have emerged online, trying to stir up fears that authorities in Virginia were going to start confiscating guns.

We wrote about genesiustimes.com before. Here is a recent article that mentions the site: