Has U.S. House Speaker Nancy Pelosi begun a "post-impeachment eviction procedure" against President Trump? No, that's not true: This is satire that has been stolen by real fake news sites to rile up the conservative base by positing it as true news.

While Pelosi is indeed set to send articles of impeachment to the Senate for a trial next week after a lengthy delay, no such provision even exists that would allow her to begin such an "Executive Eviction procedure as detailed in constitution," as the faux story states.

With everything about the impeachment of President Donald Trump nearly completed, speaker Nancy Pelosi and the Democratic Congress have begun the Executive Eviction procedure as detailed in constitutional article 8, section 4, paragraphs 5-7.

It's the same article that allows Lindsey Graham to be both a Senator and Avon lady.

The Procedure has only been used once before during the Jackson impeachment to eliminate the offending criminal leader from office and the White House. Nixon of course, famously resigned before his removal could be completed, and Clinton was far too cool.

Within the next week, Pelosi will instruct Capitol police to deliver and display an official legal notice of eviction on the front door of 1600 Pennsylvania Avenue, leaving the former President and his family 48 hours to vacate the premises. 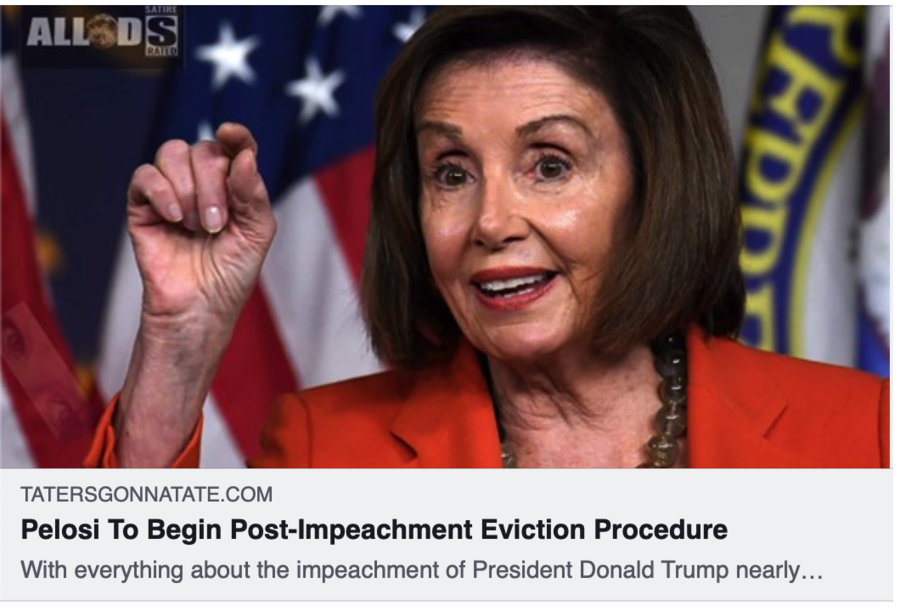 For context, the District of Columbia does have a list to 10 criteria landlords can use to evict tenants - failure to pay rent being among them - but the D.C. law is written to apply to owners of private property, not federal agencies. Also, while the term "impeachment" suggests that to be impeached means you are removed from office and out the door, impeachment is just part of a two-step process that culminates in a trial by the U.S. Senate.

Trump was formally impeached by the House on charges of abuse of power and obstruction of Congress on December 18, 2019, but his Senate trial has not started. On January 10, 2020, Pelosi - who has withheld the articles of impeachment from the Senate over disagreements about how the Senate would conduct a trial - said she was ready to send them to the Senate the week of January 13, 2020.

Among other clues to its complete fabrication, the story cites "constitutional article 8, section 4, paragraphs 5-7" as the legal grounds for a "Executive Eviction procedure." The U.S. Constitution has only seven articles and 27 amendments. But neither the constitution nor its amendments say anything about presidential evictions from the White House.

Commercial refuse removal service "1-800-Junk" has volunteered to assist with transporting the possessions of the first family to a nearby waste facility. Sources also estimate a post-Trump fumigation operation would cost upwards of six hundred thousand dollars, to be withdrawn from the wall-building fund that thousands of gullible old fungus farms donated their social security money to.

All of this, line-for-line, is false, made up by a satirical website run by Christopher Blair, a self-professed liberal from Maine who profits off trolling conservatives. "Real" sites then rip and paste the story to send across the internet but stripped of all satirical references. This way, the "real" sites present it as valid news that is quite often believed.

Articles from Blair's sites frequently get copied by "real" fake news sites that often omit the satire disclaimer and any other hints the stories are fake. Blair has tried to get these sites shut down in the past but new ones keep cropping up.

We wrote about tatersgonnatate.com before. Here are our most recent articles that mention the site: