UPDATE: After this article was published, we received an email from Nathan Berning, executive director of Let Them Live Action Corporation. Berning called the Guttmacher Institute studies we cited "biased." We noted in our fact-check that Guttmacher Institute advocates "advancing sexual and reproductive health and rights in the U.S. and globally" and that both sides of the abortion debate are armed with statistics to defend their entrenched positions.

We reached out to Guttmacher Institute about objections to its study, but we did not receive a response.
See the below update for the full response from Berning. Here is our original story:

Are a majority, perhaps as many as 75%, of abortion clinics in the United States located in areas with high minority populations? No, that does not appear to be true: While the claim has been making the rounds for years, research suggests that the numbers are exaggerated. According to Planned Parenthood, as well as separate research and previous fact checks, a majority of clinics are located in "rural or medically underserved areas."

The claim originated from an ad (archived here) published by Let Them Live on January 7, 2020. It opened:

Did you know 79% of Planned Parenthood's surgical clinics were within walking distance of minority communities?

Instead of helping women, Planned Parenthood preys on vulnerable mothers. 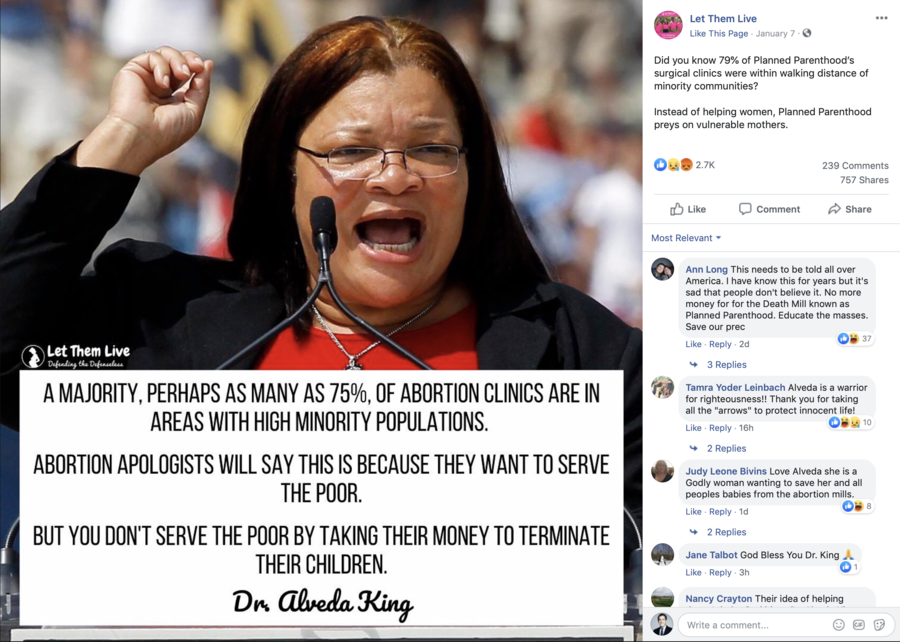 Just as the abortion issue is so divisive in the United States, advocates on both sides of the debate cite statistics to support their entrenched positions.

Abortion rights supporters refer to data from Planned Parenthood, which said 56% of its clinics are located in rural or underserved areas. They also cite research from the Guttmacher Institute, which advocates "advancing sexual and reproductive health and rights in the U.S. and globally." In a study published in 2014, Guttmacher declared the claim that most abortion clinics are located in minority neighborhoods to be false. The group determined that less than 10% of the clinics were in predominantly African American neighborhoods.

If those statistics are true, the ad making the claim that "perhaps as many as 75%" of clinics are near minorities is exaggerated.

In 2011, The Washington Post fact-checked claims made by former Republican presidential candidate Herman Cain, who suggested that 75% of abortion clinics were built in the black community. The paper's detailed analysis of the map mentioned above determined that only about 110 locations out of about 800 were in areas where the black population is greater than a quarter of the overall population.

So, while both sides of the abortion debate offer up statistics to make their case, it appears the numbers mentioned in this ad - "as many as 75%" - are exaggerated.