Did thousands of young supporters of President Trump show up at local military recruiting stations to volunteer for active duty after the U.S. killing of Iran's Soleimani? No, this isn't true: This claim is from a satirical website run by a Maine liberal who trolls conservatives with phony stories to rile up their base. But the danger lies in real fake news websites that steal the content and remove all satirical references, which was the case here as copies of the fake news are already ciriculating the web. It is false.

The claim originated from an article published by Taters Gonna Tate on January 4, 2020, titled "Thousands of Young Trump Supporters Show Up At Local Recruiters To Volunteer For Duty" (archived here) which opened:

While liberals cry over a dead Iranian general, young Trump supporters are stepping up by the thousands to help the cause and serve their country. Recruiters from coast to coast are reporting that they have lines out the door and around the block full of young men and women, proudly wearing their Make America Great Again hats, ready to enlist to go to war against Iran.

One Naval recruiter called it the greatest display of patriotism he's ever seen:

'These kids are amazing. Only about half of them will be able to pass the psychological exam and another 30 or 40 percent won't pass the aptitude test, but their loyalty and willingness to do whatever it takes to support their president is just astounding.' 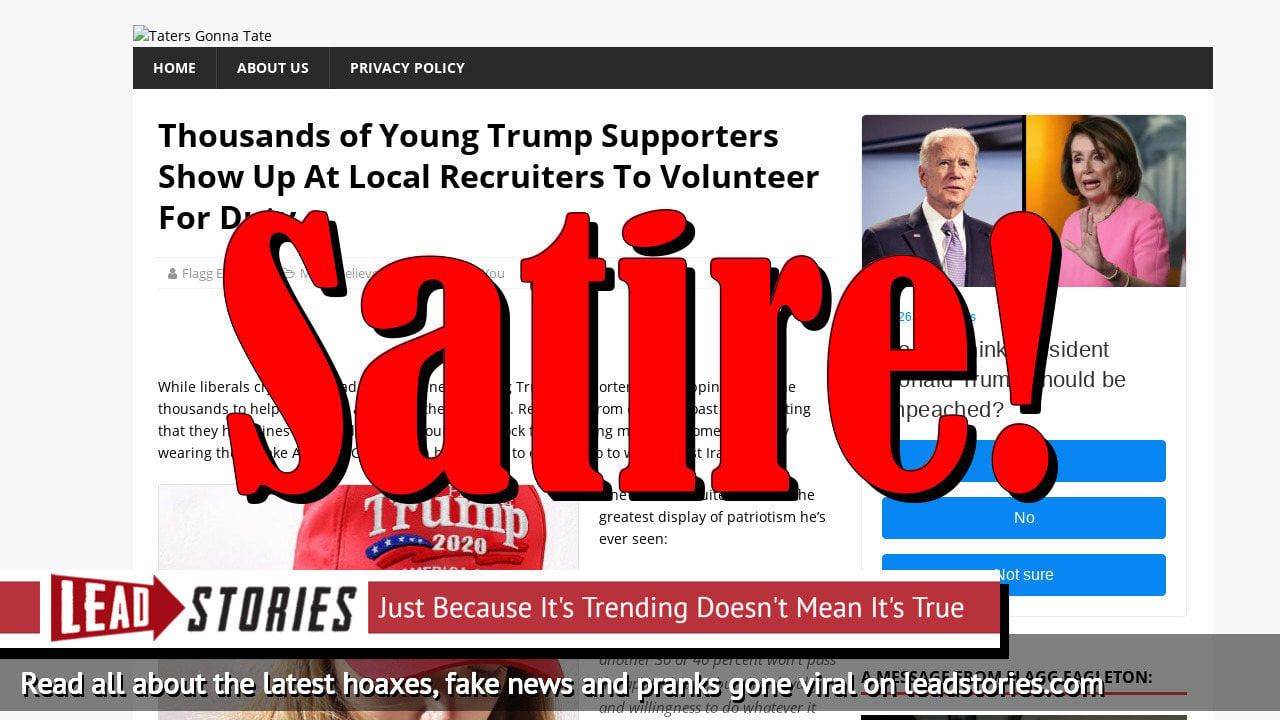 This claim came one day after the U.S. struck and killed Maj. Gen. Qassem Soleimani of Iran's Revoluntionary Guards, and three days before the January 7, 2020, strikes by Iran on U.S. bases in Iraq, where American troops were based. But it never happened, as no long lines were ever formed outside of recruiting stations to sign up in support of Trump's military moves against Iran.

Liberals are busy crying over a dead Iranian general. Trump supporters are busy making sure their country is safe.

We wrote about tatersgonnatate.com before. Here are our most recent articles that mention the site: