Did a priest in South Africa kill members of his congregation when he fed them rat poison? No, that's not true: A man known as Prophet (not Priest) Light Monyeki of Grace Living Hope Ministries insists that, yes, in 2017 he mixed rat poison with water and drank it himself, before others drank it, too. But he's very much alive, as is everyone who took part in the ceremony, he told Lead Stories. And the ministry he leads is still up and running, as is evidenced by social media posts. Fortunately it appears he did not administer anyone a fatal dose.

The story originated from an article published by UNILAD on January 15, 2017. It was titled "Priest Feeds Congregation Rat Poison To Prove They're Above Death... They All Die" (archived here) and opened:

Priest Light Monyeki from Soshanguve, South Africa, took it upon himself to prove his follower's were superhuman and immortal, with a seriously dangerous stunt.

The priest declared to his congregation they should not fear death, as they will not die, before proceeding to pour bottles of water contaminated with rat poison into their mouths...

Horrifyingly, many of his followers ran forward to take a fatal drink from the treacherous bottle.

Priest Feeds Congregation Rat Poison To Prove They're Above Death... They All Die

I don't think he expected that...

Grace Living Hope Ministries, where Monyeki serves, posted about the incident on February 5, 2017, on its Facebook page, saying:

The man of God, Prophet Light Monyeki demonstrates power of faith by causing congregants to drink Rattax; deadly poison to show forth their faith. ... [He] declared life from above upon the water mixed with Rattax; and spoke nourishment unto bodies and healing unto the sick. A multitude of congregants voluntarily ran to the front to have a drink of the deadly poison. After declaring nourishment and healing, Prophet Light was the first one to drink. 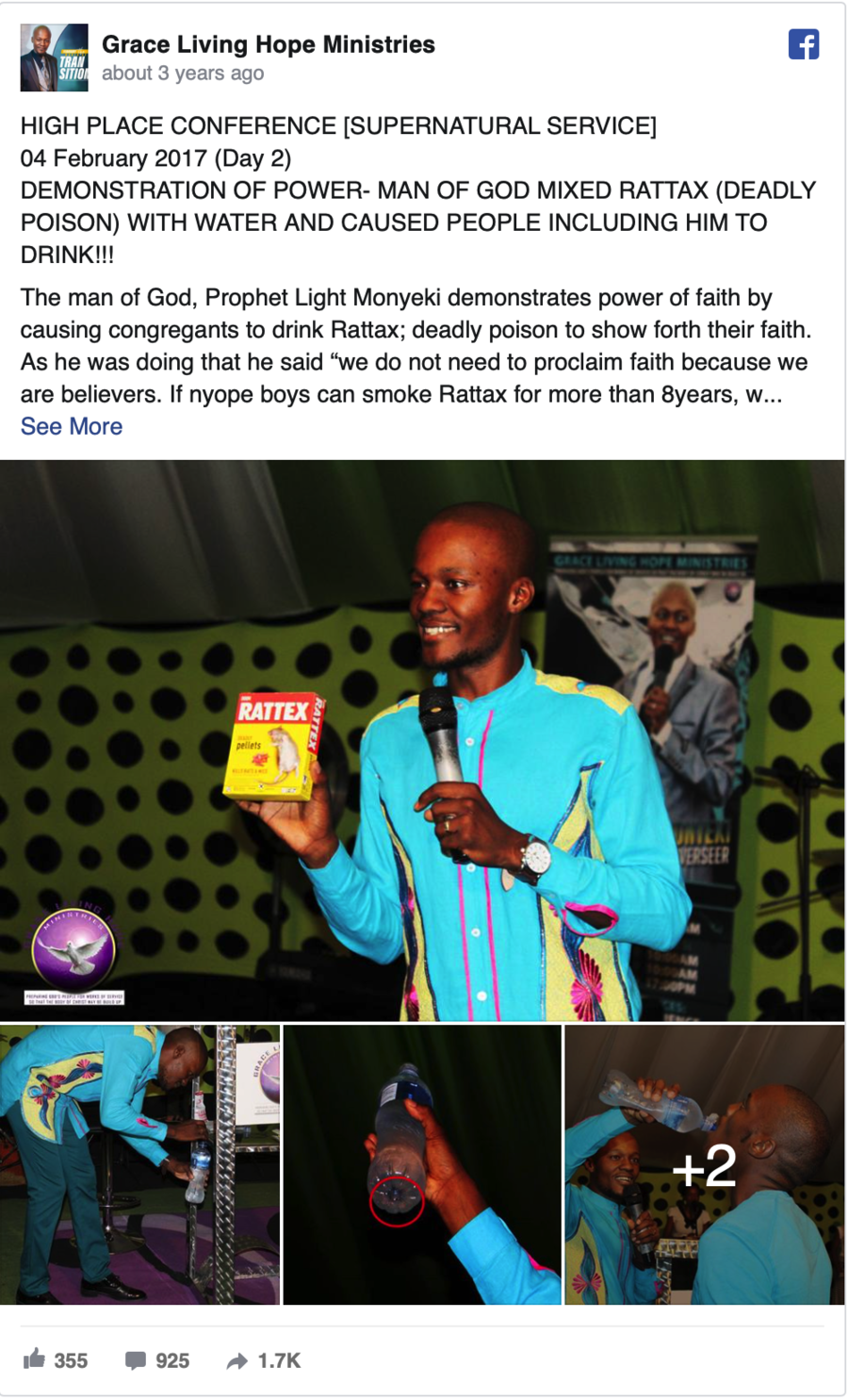 Other publications shared the story about a preacher giving Rattex (the proper spelling) to his congregants, but they did not say anyone died.

The Daily Mail ran a piece, as did the Metro out of the UK. Times Live out of South Africa published this story, which opened:

Pastor Light Monyeki has apparently taken a lead from nyaope smokers and been mixing Rattex with water and offering it to his congregants claiming it is for "nourishment and healing".

Commenters on the Grace Living Hope Ministries Facebook page have gone after Monyeki. "Legit killed people by convincing them to eat rat poison. Why would anybody support this disgusting person and why is he not in prison? Goes to show that there is a hypocrite running this church," one woman wrote in the reviews section.

"Sponsored by Rattex..." wrote one person in a comment thread. "How are you not in prison? You are basically Jim Jones Jr.," chimed in another. "Shouldn't you be in prison for murdering people in the belief of an imaginary friend?" added a third.

The spiritual leader responded to Lead Stories' questions through Facebook messenger, saying that although he'd stayed quiet about this matter, he now felt compelled to speak out "so the truth can be heard."

Monyeki does not deny that he mixed rat poison with water before drinking it and sharing it with others. What he does dispute is that anyone was hospitalized or killed in the process.

This is what he wrote, when asked if he gave the church members rat poison, although we've made some corrections to typos and light edits to make his message clearer:

Yes this did happen, and there was no case of any of our members being hospitalized or dying as the result of this demonstration. If there was any death, the Man of God [Monyeki] would have been prosecuted by the state because South Africa is a country where justice is served regardless of religion. All the information about people who died or were hospitalized are false. As you can see the ministry is still operating even today.

Monyeki says he has no regrets. In the messenger interview, this what he wrote - again, with some corrections for clarity:

You can't regret proving your Faith. ... We all know that rat poison can kill humans if they consume it, however in this case this was to make people understand that Jesus begs up his Word (Mark 16 verse 17) through the Holy Spirit and we know that if Jesus did not beg up what God's Word says people would have died in our church including the Prophet since he was the first to drink the water mixed with the rat poison yet in this case the Prophet was led by Gods Spirit to do this demonstration according to what is written in the bible Mark 16 v 17

According to an article in VeryWellHealth.com by EMT-P and author Rod Brouhard - an article that was peer-reviewed by a medical doctor - it is extremely dangerous to ingest rat poison. But it is not always fatal. He writes:

People who exhibit more than one symptom from this list may have ingested one or both types of rat poison, including:

NewsGuard, a company that uses trained journalist to rank the reliability of websites, describes unilad.co.uk as:

A British viral news website targeting young audiences. Previously notorious in the UK for producing misogynist content, the site has since come under new ownership and was rebranded.

We wrote about unilad.co.uk before, here are our most recent articles that mention the site: