Did Bernie Sanders say undocumented immigrants are "entitled" to government benefits during a campaign rally in Texas? No, that's not true: The candidate for the Democratic nomination for president said that his administration will be about "understanding that all of our people, and when I say all I also mean the undocumented in this country -- that all of our people are entitled to basic human rights." Sanders said in previous speeches that he believed health care was a human right and that undocumented immigrants would be included in his "Medicare for All" proposal, but he has not extended it to all government benefits given to U.S. citizens.

The story originated with a YouTube post from the GOP War Room, which featured a clip from Sanders' rally in El Paso on Feb. 20, 2020. It was tweeted by the GOP's rapid response director, Steve Guest, which featured a clip of the rally. It was then picked up within hours by Flag&Cross, which linked together a series of tweets into an article titled "Watch: Bernie Says Undocumented 'Entitled' to Same Government Benefits As U.S. Citizens" (archived here). It begins:

Democrats and entitlement. Everyone deserves everything, even those who have broken the law to get into the United States. No free lunch to Democrats essentially means free everything. 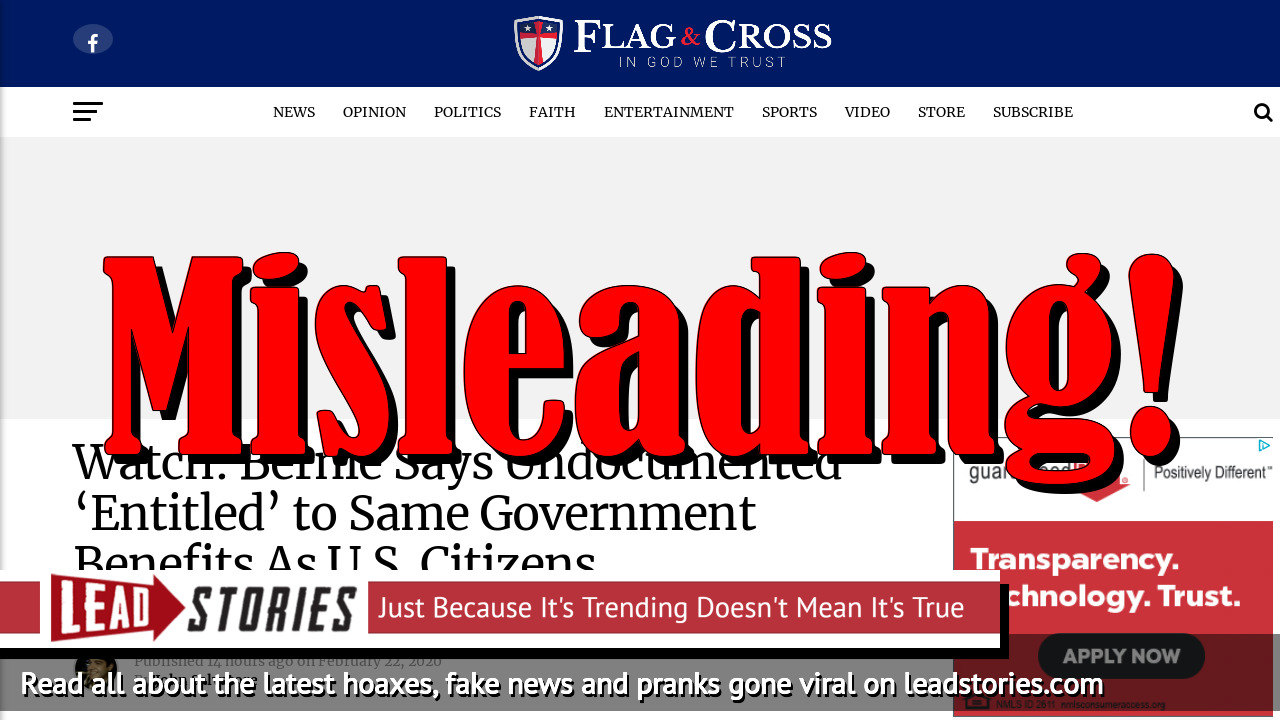 This is the video used by many of these stories. It was posted by the GOP War Room, which is operated by the Republican Party:

What Sanders said was:

Today, we've got 500,000 people sleeping out on the streets of America. Today, we have 18 million people paying 50 percent of their limited income for their housing. Today we have hundreds of bright young people who can not afford to get a higher education. Today, we have 45 million people playing a student debt that many of them cannot afford to pay. So what our campaign is about, and what our administration will about is rethinking America, understanding that all of our people -- and when I say all, I also mean the undocumented in this country -- that all of our people are entitled to basic human rights.

Sander's campaign website does include a 21st Century Economic Bill of Rights which reads:

The 21st Century Economic Bill of Rights establishes that all Americans are entitled to:

While it only references Americans -- not undocumented immigrants -- Sanders has specifically stated in speeches that health care should be provided as a human right to everyone, without regard to immigration status. Sanders has also said that public colleges should be free to everyone in the country. But the claim that Sanders called for the undocumented to the the "same government benefits as U.S. citizens" in this video or elsewhere is unsupported.

Basic human rights, as defined by the United Nations, are "rights inherent to all human beings, regardless of race, sex, nationality, ethnicity, language, religion, or any other status. Human rights include the right to life and liberty, freedom from slavery and torture, freedom of opinion and expression, the right to work and education, and many more."

NewsGuard, a company that uses trained journalists to rank the reliability of websites, describes flagandcross.com as:

A website that covers politics, faith, and entertainment from a conservative, hyper-partisan perspective.

We've written about flagandcross.com previously. Here are our recent articles that mention the site: