Did Fox News win a Pulitzer Prize for its reporting during the coronavirus crisis? Not, that's not true: The claim was made in a post on a site clearly labeled as satire and part of a well-known network of satirical websites that trolls conservatives with fiction to rile up their base.

Hannity, Laura, and the whole gang over at Fox News are in for a MAGA surprise! It has just been announced that they are winning one of the most coveted awards in journalism -- the Pulitzer.

Oh, the liberal media is going to be kicking dirt about this one.

This accolade is specific to their "fair and balanced" coverage of the crisis. The network has been on the ball through this entire ordeal, making sure the public is educated on the dangers of the current crisis.

Joe Barron, Chairman of the Pulitzer Committee had this to say about the nomination:

"We are pleased to announce that Pulitzer is awarding Fox News with the 'Illusory Reporting Award.' This is an honor we reserve only for them, as they have earned their place as leader in this category. Congratulations to the network and their viewership. You are America!" 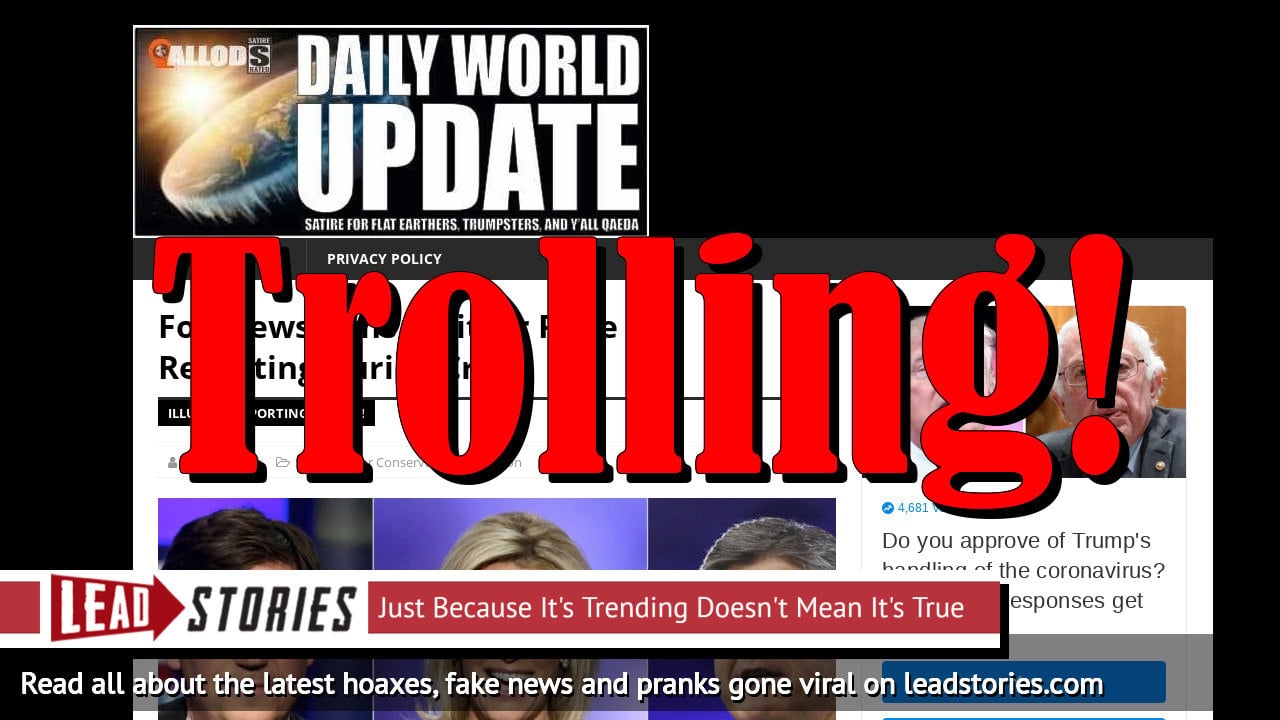 They are so deserving of this. The awards committee got it right this time.

Under the tagline "Illusory Reporting Award!" the post said:

Hannity, Laura, and the whole gang over at Fox News are in for a MAGA surprise! It has just been announced that they are winning one of the most coveted awards in journalism -- the Pulitzer.

Oh, the liberal media is going to be kicking dirt about this one.

This accolade is specific to their "fair and balanced" coverage of the crisis. The network has been on the ball through this entire ordeal, making sure the public is educated on the dangers of the current crisis.

Also, there is no Pulitzer Prize category for "illusory reporting."

Merriam-Webster online dictionary defines illusory as "based on or producing illusion," and the satirical article cites examples from Fox News and links to clips from Fox broadcasts. The story says this about host Sean Hannity:

Specifically, on March 9, Hannity took to the airwaves to dismiss the entire thing and ignore the failure of the Trump administration, obviously intending to calm the masses, no matter how inaccurate the reporting.

Regarding host Laura Ingraham, the article, misspelling her name, says:

Laura Ingrahm obviously got the talking points memo from the White House at that time, also dismissing the emergency and calling all other reporting of the facts as "panic pushers."

Oh, where would we be without these stellar journalists? Some say more prepared. Some say with a more educated populous. Some say a whole hell of a lot better off as a whole.

But, here we are. Attempting to dismiss this kind of ridiculousness on a Satire site, because we have more ethics and integrity than Faux News.

Readers are told upfront that the entire site for Daily World Update is satire, with the site's masthead carrying the slogan, "SATIRE FOR FLATEARTHERS, TRUMPSTERS AND Y'ALL QAEDA." And, in its "About" section, the states: "If you can seriously read this stuff and think it can be passed off as real to reasonable people, you need to go out, right now, and buy a sense of humor and a clue."

Daily World Update is part of the "America's Last Line of Defense" network of satire websites run by self-professed liberal troll Christopher Blair from Maine along with a loose confederation of friends and allies.

Blair has been in a feud with fact-checking website Snopes for some time now and has also criticized other fact-checkers in the past who labeled his work "fake news" instead of satire. In reaction to this, he has recently rebranded all his active websites and Facebook pages so they carry visible disclaimers everywhere.