Did the U.S. government buy 30,000 guillotines and put them in storage -- at the ready for planned executions of American citizens when martial law is imposed? No, that's not true: It's a false claim that has been floating around the internet since at least 2013.

One of the more recent incarnations of this wild story appeared in an article by Melinda H (archived here), published by LinkedIn on April 29, 2017, under the title "Why Did The U.S. Government Purchase 30,000 Guillotines?" It opened with a blblical quote:

"And I saw thrones, and they sat upon them, and judgment was given unto them: and I saw the souls of them that were beheaded for the witness of Jesus, and for the word of God, and which had not worshipped the beast, neither his image, neither had received his mark upon their foreheads, or in their hands; and they lived and reigned with Christ a thousand years." ~ Revelation 20:4

The LinkedIn piece continues with a now-deleted MSN story, a 2017 piece by the New York Daily News about a controversial federal judge saying guillotines make for a good form of execution, along with firing squads, and copy from a 1996 Georgia state legislative proposal to allow those condemned to die to choose the guillotine for their manner of death.

Next is a video from "Presents of God Ministry," billed as an "update" to this purported ongoing threat of governmental head-chopping: The video tells how a candidate for the U.S. Senate, from the state of Maine, has chosen the guillotine as a logo for campaign merchandise. Here is the video:

This is true: According to The Associated Press, candidate Bre Kidman says the image is not meant to be taken literally. She says it represents revolution by the lower and middle classes. Here is the short February 16 AP story:

A Maine candidate for the U.S. Senate has a picked a guillotine as a logo for campaign merchandise, saying it's aimed at being a sign of revolution by lower and middle classes and is not meant to be taken literally.

Bre Kidman, an attorney who's running for the seat held by Republican Sen. Susan Collins, said the logo is a symbol of the need for a revolution to remove big money from politics, the Portland Press Herald reported.

"The guillotine is an image which calls to mind what people have done for revolution before," said Kidman, a Democrat, who faces at least four other candidates in the primary on March 3.

The idea grew out of frustration with large amounts of money in politics, the candidate said.

T-shirts and buttons with the new logo will be given away, instead of sold, to people who want to talk about the campaign ideas with fellow residents.

The video goes on to talk about the unfounded, old story about the 30,000 guillotines. But neither that video, nor the LinkedIn post from three years ago, offers any proof of the claim.

According to the LinkedIn article, the U.S. Congress has approved the use of guillotines for "governmental purposes" -- but that's simply not true. The article offers no proof, because there is none.

Many readers of the LinkedIn article weren't buying it: 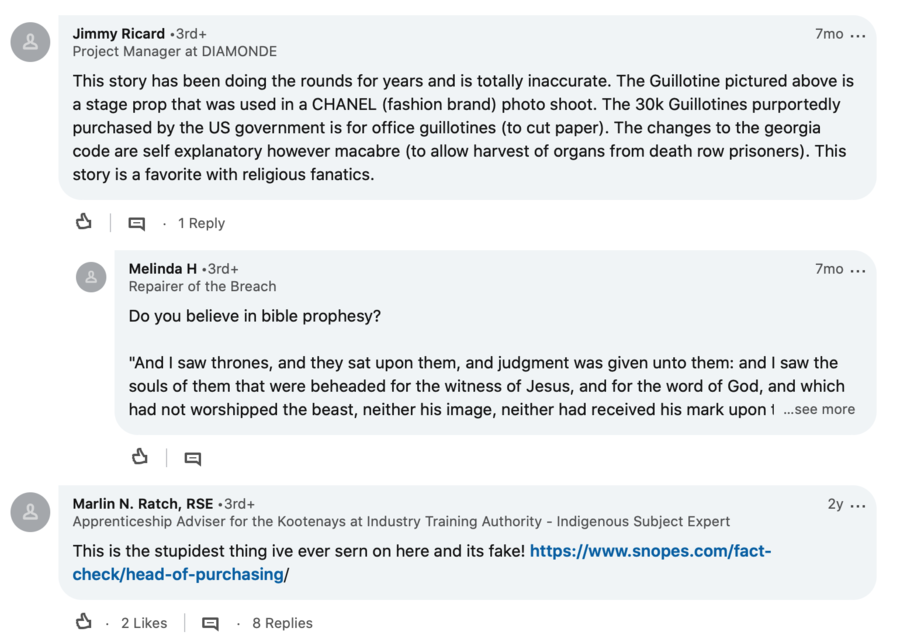 The claim, which has previously been shown to be false, is similar to a story debunked in May 2019 by Lead Stories involving guillotines, the federal government and evil plans to round up American citizens under martial law to throw them into internment camps.