Did Facebook ban the posting of the Lord's Prayer because it goes againsts its policies? No, that's not true: A Facebook spokesman said the social media network has not banned the prayer -- also known as the "Our Father" prayer -- from its platform.

Facebook is saying that posting the
Lords prayer goes against their
policies, I'm asking all Christians
to please post the Lord's Prayer./

Our Father who art in heaven
hallowed by Your name, Your
Kingdom come, Your will be done, on
earth as it is in heaven. Give us this
day, our daily bread, and forgive us
our transgressions as we forgive our
transgressors and lead us not into
temptation but deliver us from evil,
for Thine is the Kingdom, the Power,
and the Glory forever. Amen 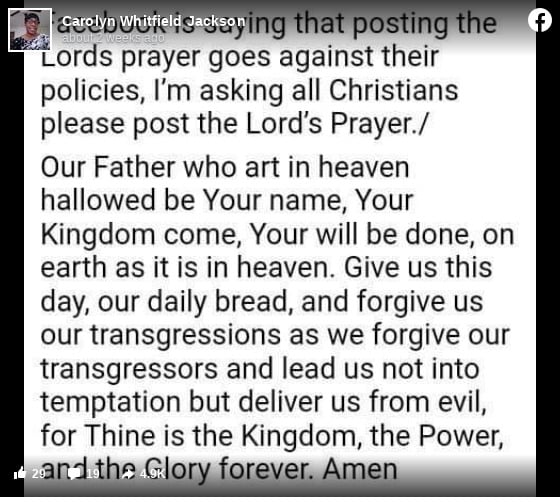 A quick search on Facebook reveals several pages and posts dedicated to the prayer, including many that have the full text. Some of them have been on Facebook for several years.

In a statement to Lead Stories, a Facebook company spokesperson wrote in an email:

"Posting the Lord's prayer does not violate our policies"