Is the photo accompanying a story about the death of a 13-year-old English boy actually the right person? No, that's not true. A biographcal piece on Ismail Mohamed Abdulwahab, who died on March 30, 2020, from COVID-19, features the photo of Conor Wilmot, a 13-year-old Irish boy who died in 2017 from an internet self-harm challenge.

The photo of Conor Wilmot appeared in two similar biographical summaries about Ismail Mohamed Abdulwahab (archived here and here) published by wikitrusted.com on April 3, 2020, and wikifoxnews.com on April 4, 2020. The wikitrusted.com article was titled "Who is WHO IS ISMAIL MOHAMED ABDULWAHAB ( Died) Wiki, Bio, Age, Family, Career, Net Worth, Many More Facts You Need To Know." It opened:

"Ismail Mohamed Abdulwahab is the first 13-year-old boy in the United Kingdom who is known to have died after positive tests for coronavirus were buried without the immediate presence of his family as they isolate themselves. None of Ismail's immediate family was able to attend after two of his six siblings began showing symptoms of the virus. The coffin carrying the body of 13-year-old Ismail Mohamed Abdulwahab was thrown to the ground by four people wearing protective clothing, gloves and face masks in a cemetery in south-east London."

Here is how the stories appeared, side by side: 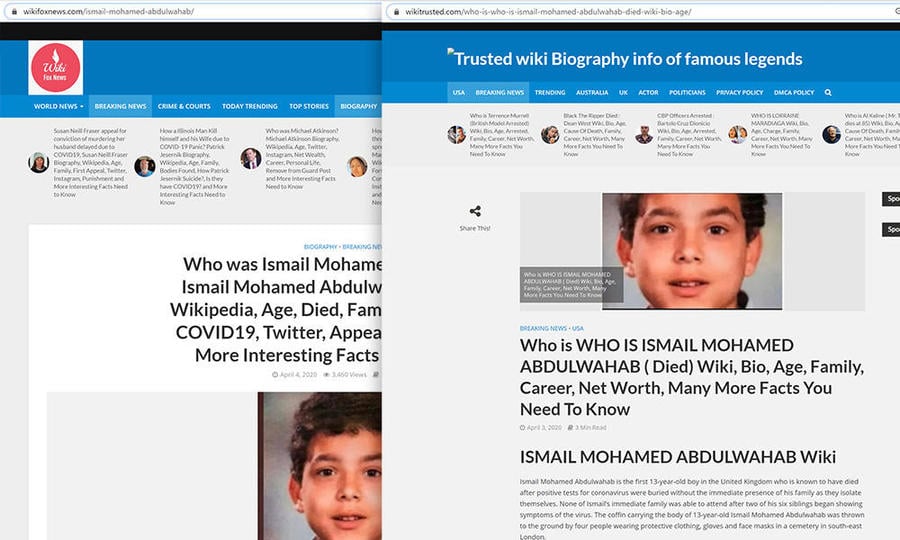 The incorrectly captioned image was embedded at the top of both articles, by wikitrusted.com and wikifoxnews.com. The inclusion of a photo of Conor Wilmot who died in 2017, in the biography of Ismail Mohamed Abdulwahab, who died in 2020 of COVID-19 has added a false crisis-actor narrative to the growing number of online conspiracies about the novel coronavirus.

Some people, for example, claim that the coronavirus is cover for the current economic crisis or to hide 5G cellular technology tower installations. Many other conspiracies also still thrive despite the wide evidence that COVID-19 is all too real.

This young boy in the articles is actually Conor Wilmot.

Wilmot's picture is correctly featured on an Irish Times article from May 2017, which reads:

"At the funeral mass of Conor Wilmot, Fr Harry Bohan, the parish priest of Sixmilebridge, told mourners that Greg Wilmot had found his son's body behind the family's home in Sixmilebridge last Thursday.

Mr.Wilmot has said the 13-year-old died because of a "choking game" he had found on the internet and did not intend to take his own life."

Wilmot's unfortunate death had nothing to do with coronavirus, especially since it occured years before Ireland reported its first coronavirus case in February 2020.

However, Abdulwahab did die from the coronavirus in late March 2020 in London, and he was recently buried without the presence of his family because of worldwide quarantines:

💔Heartbreaking scenes as thirteen-year-old Ismail Mohamed Abdulwahab is buried without his family present, as his mother & siblings self-isolate.The teenager died alone in hospital after testing positive for the coronavirus.📷taken with his families' permission by @aaronchown💔 pic.twitter.com/and5k30f1T

Wilmot's photo also appeared alongside another teenager who died from the same violent Blue Whale Challenge in the U.S. in July 2017, causing some confusion about the two boys' identities: 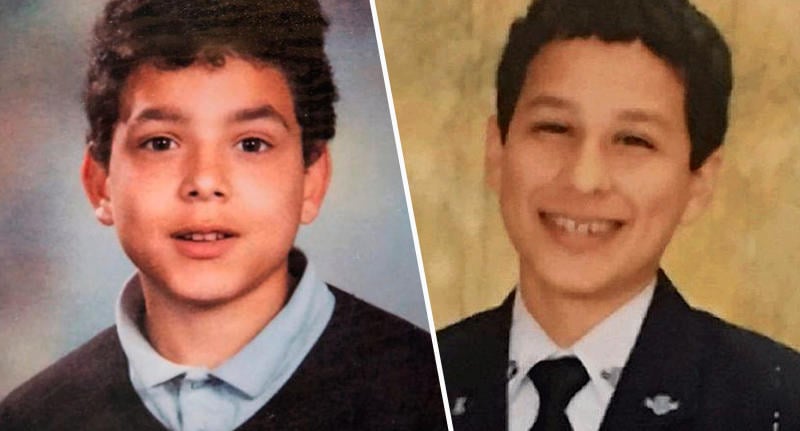 This photo, which came from a Unilad article in July 2017, features both Wilmot (left) and Isaiah Gonzales (right) as victims of the same suicide-provoking internet ploy. Gonzales' was 15 when he died in his home in San Antonio, Texas.

The photo of Gonzales was run by multiple Texas news outlets, but reproductions of his story outside the state credited KSAT-TV, a television station serving San Antonio and other parts of Texas.

The photo of Vitor Godinho, a 14-year-old from Portugal who died in March 2020 from coronavirus, has also been conflated with Abdulwahab. Godinho's photo was posted to Facebook and wrongly captioned as the face of Abdulwahab: 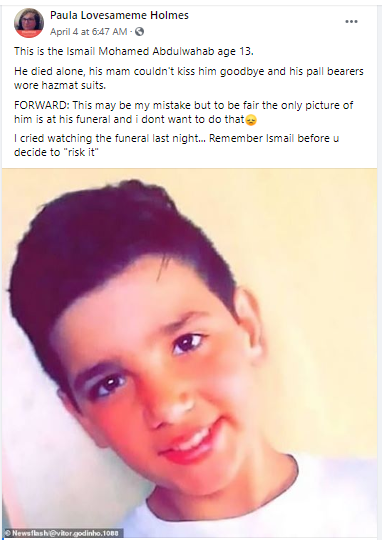 This post from Facebook even says in the bottom corner that it's not Abdulwahab but Godinho. Yet, the same misattribution remains in Facebook groups, spreading false information:

Clearly, all the boys are entirely different people, but only Abdulwahab and Godinho are connected to the coronavirus outbreak, which has reached over 1 million cases worldwide as of April 6, 2020.

Other supposed "news" outlets online have also misattributed the headshots, including Smartclub, which links to an article from IOL that now features a different photo. A near replica of the wikitrusted.com story posted on wikifoxnews.com, and wikiglobals.com also features the wrong headshot.