Are "murder hornets" the same insects as cicada killers and native to the United States? No, that's not true: murder hornets are Asian giant hornets and are new to North America. These newcomers apparently have not traveled beyond Washington state and Canada.

A post (archived here) published on Facebook on Tuesday, May 5, 2020, correctly pointed out that there is a difference between the murder hornet that created a social media stir in early May and the North American native cicada killers. It included a photograph of five large insects in someone's hand and opened:

You will see these in your backyard, they're native and always have been, dont let the media scare you, no one gave a shit before the news told them to. They're called cicada killers. Also, "murder hornet" is a made up scare tactic name for the Japanese hornet, so relax.

Murder hornets became a sensation after video of one of them wrestling with a mouse -- and killing it -- was shared on social media in early May, 2020:

Dr. Chris Looney, in the Entomolgy Department at the University of Washington delivered a presentation about the Asian giant hornet to the Washington State Department of Agriculture on March 4, 2020. The video was posted on YouTube:

In that presentation, he addressed the differences between the Asian giant hornet (or, colloquially, the "murder hornet") and the Western cicada killers -- a type of wasp -- shown in the post above. Among those differences: 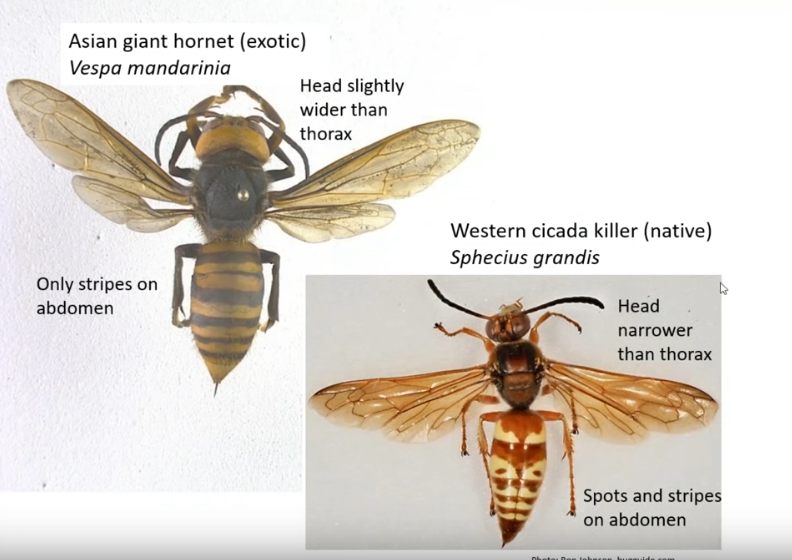 According to Looney there were only four sightings of the Asian giant hornet in the Pacfic Northwest in all of 2019. There is genuine concern that, if they continue to multiply, their range could expand. A similar species in Europe, V. Velutina, was established in Europe by 2004, and spread at about 60 km per year. So Washington state is implementing plans to eradicate the Asian giant hornet before that happens, using traps and by targeting newly emerging queens.

They're extremely, extremely rare in the U.S., though if you do happen to encounter one, Looney says, "run away ... just get away from them. But keep in mind that unless you are at a nest or a hive they're attacking, you don't have to panic and freak out."

So, while the Asian giant hornets are indeed real (but rare), you can relax.