Did the U.S. Centers for Disease Control and Prevention make 30,000 COVID-19 deaths disappear "just like that," proving the American people were lied to as part of some social experiment? No, that's not true: On May 2, the CDC reported their latest count, with more than 64,000 people in the United States having died from the novel coronavirus, an increase of more than 1,800 deaths from the day before, on May 1.

The CDC acknowledges one set of their numbers lags behind. But even then, a quick search of their site shows other CDC data that is actually in line with other estimated COVID-19 death tolls, and the numbers were not revised down by 30,000 deaths.

Still, many posts on social media, like this one on May 2, 2020 (archived here), state the data shows Americans have been lied to about the seriousness of COVID-19. This post read:

And just like that around 30,000 COVID death just disappear

This is the biggest scam ever perpetrated on America.

You were lied to, held hostage, and nearly lost everything so Fauci & Co. could run a social experiment."

Other iterations of the same theme looked like this from Eric Nepute, whom Lead Stories wrote about before after he posted a video in which he touted a quinine and zinc combination as a preventative measure for coronavirus:

Another version of the claim appeared in the form of this image: 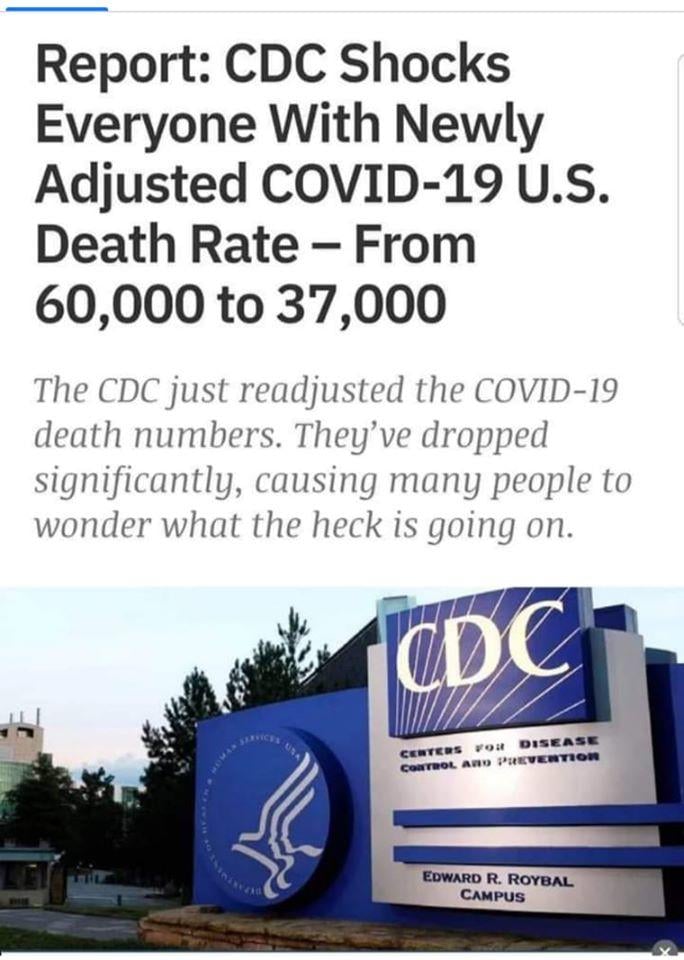 The social media posts claiming the CDC drastically revised down its numbers have gained traction in recent days, adding to conspiracy theories about overhyping the death toll from the pandemic and unncessarily placing quarantines on Americans. The viral posts cite a different set of data -- a set the CDC acknowledges lags behind by several weeks.

That fact hasn't stopped a frenzy online. The posts cite the data from the National Center for Health Statistics. Indeed, as of May 1, the NCHS listed 37,308 COVID-19 deaths. (You can see for yourself here.) So, those numbers in the viral posts are true, but they are not the full picture.

Other posts wrongly assumed the number reported in the media came from the column marked "Deaths with Pneumonia, Influenza or COVID". This is also not correct.

At the bottom of the chart, the government explains the death toll is weeks behind, and the data "during this period are incomplete because of the lag." The CDC further explains:

It is important to note that it can take several weeks for death records to be submitted to National Center for Health Statistics (NCHS), processed, coded, and tabulated. Therefore, the data shown on this page may be incomplete, and will likely not include all deaths that occurred during a given time period, especially for the more recent time periods.

Why these numbers are different
Provisional death counts may not match counts from other sources, such as media reports or numbers from county health departments. Our counts often track 1-2 weeks behind other data for a number of reasons: Death certificates take time to be completed. There are many steps involved in completing and submitting a death certificate. Waiting for test results can create additional delays. States report at different rates. Currently, 63% of all U.S. deaths are reported within 10 days of the date of death, but there is significant variation among jurisdictions. It takes extra time to code COVID-19 deaths. While 80% of deaths are electronically processed and coded by NCHS within minutes, most deaths from COVID-19 must be coded manually, which takes an average of 7 days. Other reporting systems use different definitions or methods for counting deaths.

There has also been no "sudden" drop in the numbers reported this way. According to versions of the page kept by the Internet Archive, these were the earlier reported numbers over time:

Again, as of May 2, the CDC's official coronavirus death toll had topped 64,000. The agency bases that figure on deaths "reported by U.S. states, the District of Columbia, and other U.S.-affiliated jurisdictions. Each jurisdiction's health department reports how much the virus has spread in their community." Here is a snapshot of the CDC's site from May 2: 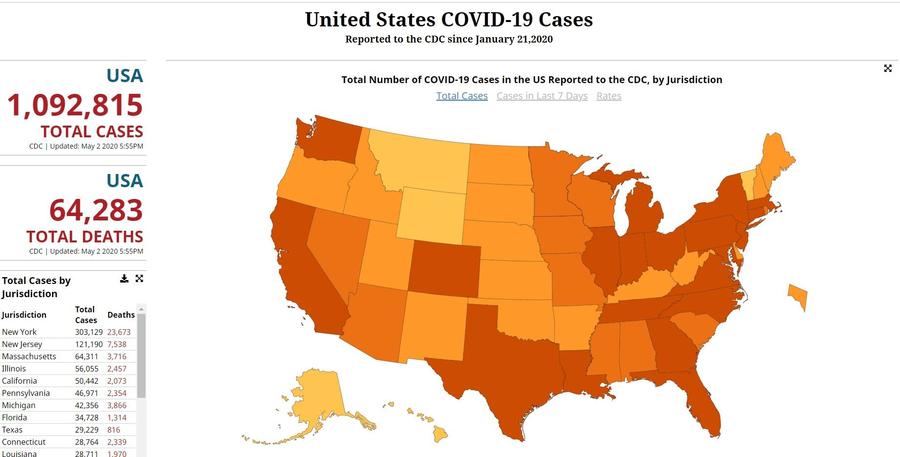 While the NCHS numbers may lag, other organizations and agencies reported the "real-time" numbers. Here is the latest U.S. death toll, as reported by Johns Hopkins University & Medicine. As of May 3, there were more than 66,380 deaths attributed to COVID-19 in the United States, with 1,133,000-plus confirmed cases.

It is important for the CDC to have both sets of numbers:
Articles or memes comparing both sets of numbers and then claiming the CDC somehow "adjusted" the number or made deaths disappear are being deliberately dishonest or show the author doesn't understand how the CDC calculates its numbers. In both cases that should make you stop and think about if you really want to trust medical news from that source.