Did NBC News report that all Americans would have microchip implants by the end of 2020, and that these Radio Frequency Identification (RFID) tags will allow the U.S. government to track and identify them instantly? No, that's not true. This claim apparently stems from a real NBC report in 2007 that speculated about tech advances over the next decade. A story published in 2020 falsely claimed the prediction of microchips under your skin would replace your wallet and ID would be completed by the end of this year.

The claim came in an article (archived here) published May 29, 2020, by the blog My Healthy Life Guru, titled "NBC NEWS: By The End Of The Year All Americans Will Receive A Microchip Implant!" The story opened:

NBC warns that until the end of the year the Americans will receive a microchips implant. These microchips will identify the person instantly. NBC claims that this revolution will cause the concern. People will ask themselves Am I who I say I am?

Some people are concerned that the federal government will be very influential with this revolutionized RFID Microchip. They could see every move we make. In some countries, including Virginia, the legislation against this is now in process. NBC claims that RFID Brain Microchip has already been made and is being tested on human subjects at the moment.

NBC NEWS: By The End Of The Year All Americans Will Receive A Microchip Implant!

NBC warns that until the end of the year the Americans will receive a microchips implant. These microchips will identify the person instantly. NBC claims that this revolution will cause the concern. People will ask themselves Am I who I say I am? Some people are concerned that the federal government will be very influential [...] More

Here is a screenshot from the story: 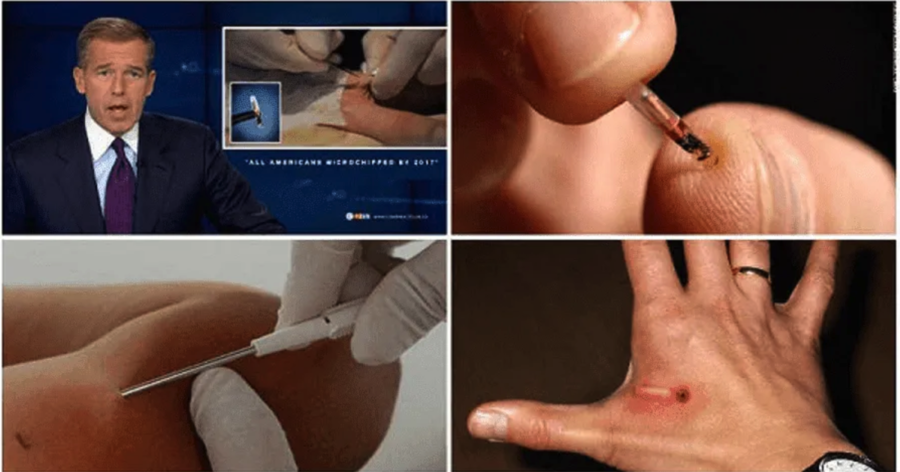 It was revealed that the use of Micro-Chip in Bill H.R. 4872 can be discovered on Page 1014 under the title National Medical Device Registry and it tells about a Class II Device That Is Implantable.

This microchip allows them to see our motion. Your food and money will be also managed with these microchips. Some experts claim that this microchip can kill the person.

The HR 3962 Bill is a copy of the HR 3200 bill with just some words sidelined in regard to the RFID Microchip but the ability to microchip every American is still possible. Take a look at the bill and read pages 1501 through 1510, read Class II special controls guidance for FDA staff read and see for yourself...

The last sentence of the story, which makes more than factual errors -- calling the state of Virginia a "country," for example -- ends with this question:

It looks and may sound frightening, but nearly everything about the My Healthy Life Guru report is wrong. The only clear truth is that there is RFID tech, in which people can be injected with a tiny capsule that sends out radio frequencies to allow short-distance tracking.

First, the NBC Nightly News Report with Brian Williams and reporter Tom Costello aired in 2007, not 2017. It was a look at the possibilities of technology in what was then a decade down the road.

Second, the story with reporter Tom Costello was all about what could happen -- not what was going to happen -- in 2017. The report has nothing to do with 2020.

This dates back a ways. Here is the video from YouTube user Imbeffie on May 28, 2010:

As early as 2004, some states, including California, Massachusetts, Utah and Missouri considered or passed RFID laws. At the federal level, there had been discussion about convening a debate about the uses and needed constraints on such technology. Also in 2004, according to the New York Times, the Food and Drug Administration opened the door to market the technology by approving a Florida-based company's technology. The New York Times story includes these paragraphs about critics' warnings and what conspiracists believed about the tech:

But critics say that if the technology gains a foothold, employers, government authorities and others with power over individuals could dictate how the technology is used. For instance, if chips were to replace dog tags as military identification, the decision would not be up to the discretion of individual soldiers.

The evolution of radio identification technology also concerns some critics. Passive tags like VeriChip do not broadcast radio waves and cannot currently be used to track a person's movements. And current scanners cannot read the passive chip from more than a few feet away. But design advances or the addition of a separate power source to the chip could expand those ranges and make tracking possible....

Online conspiracy theorists, for example, often attach capabilities to the technology that do not exist, like the ability to track individuals via satellite. Even so, real privacy concerns have emerged.

"At the point you place the chip beneath the skin, you're saying you will not have the ability to remove the ID tracking device," said Marc Rotenberg, the executive director of the Electronic Privacy Information Center, a public interest advocacy group in Washington.

But as this Market Watch story from February of this year makes clear, some states and others are cracking down on use of the chips, which appear to mostly be used for personal or business use.

Indiana is a step closer to forbidding companies from forcing workers to implant microchips in their bodies, following the state House of Representatives' unanimous passage of a bill last week that could make it the 12th state with such a law.

Is this just a bill to protect against the stuff of science fiction?

Not at all, say experts on workplace law and technology, who worry the rice-sized microchips can open up massive questions about worker privacy and company surveillance.

"I would definitely not call it far-fetched," said Ifeoma Ajunwa, a Cornell University labor and employment law professor focused on the ethical use of workplace technology. It's been three years since workers at one Wisconsin company voluntarily had microchips inserted in their hands, and it's likely there are "more companies out there, but they are probably not advertising it," Ajunwa said.

In the same way certain smartphone users arrange to get work emails on their personal phone, some chipped workers use their chip at the office so they can, for example, open up doors without company badges or key fobs.

In some cases, it's tech-savvy workers who bring the chips to their bosses' attention, said Amal Graafstra, CEO of Dangerous Things, a Seattle, Wash.-based implantable chip manufacturer and distributor, and VivoKey Technologies, a chip manufacturer

Those workers -- typically on the IT side of a business -- get an implant for personal use. The microchip is typically inserted between the thumb and index finger. The chips Graafstra's company sells start around $50, plus an optional $50 for insertion with an affiliated doctor or piercing expert.

In the same way certain smartphone users arrange to get work emails on their personal phone, Graafstra said some chipped customers use their chip at work so they can, for example, open up doors without company badges or key fobs. In Sweden, people have been using microchips to store their emergency contact information, and pay for train rides and gym memberships.

Graafstra thinks the implanted chips could potentially eliminate all sorts of lost productivity from lost key badges, but he says many of the current orders could be motivated by something else.

"I would say it's probably out of the cool factor," he said. A handful of businesses told Graafstra they were implanting the chips for media attention, he added. "There's definitely a marketing angle for some."

The My Healthy Life Guru post brings up several federal bills and resolutions. But none of them make mention of this tech or warn of infringements on rights through implanted microchips. In fact, most, including H.R. 4872 Health Care and Education Reconciliation Act of 2010, eventually became the Affordable Care Act passed under the presidency of Barack Obama, and is generally known as Obamacare:

H.R.4872 makes a number of health-related financing and revenue changes to this bill. Read together, this bill and the health care-related provisions of H.R.4872 are commonly referred to as the Affordable Care Act (ACA).

The story claims that, "It was revealed that the use of Micro-Chip in Bill H.R. 4872 can be discovered on Page 1014 under the title National Medical Device Registry and it tells about a Class II Device That Is Implantable." But no such title or type of device is found in the Act. Nor is there mention of the technology in H.R. 3962, Energy Savings and Industrial Competitiveness Act of 2019, which is defined in the bill's summary as:

This bill revises a variety of programs to encourage energy efficiency in buildings, industry, and the federal government, including by encouraging:

And nothing is to be found in H.R. 3200, America's Affordable Health Choices Act of 2009, which the story claims contains verbiage including "Class II special controls guidance for FDA staff." That wording does not appear in the Act.

Regardless, this is technology that has been around for a long time, and it is gaining more attention as more uses for the tech are being found. Consider this 2006 CNN article which does raise the possibility that the government could misuse the technology to potentially track people.

Radio frequency identification has been heralded as a breakthrough in tracking technology, and denounced as the next Big Brother surveillance tool.

RFID sounds futuristic: A transmitter smaller than a dime embedded in everything from a T-shirt to human skin, communicating data over a short distance to a reading device.

The technology has been around for decades -- the British used it to identify aircraft as friend or foe during World War II, and factory warehouses have used it more recently to make shipping more efficient.

So why is it getting so much attention now? The short answer is that RFID has moved into more common corners of society.

Today, it can be used to identify missing pets, monitor vehicle traffic, track livestock to help prevent disease outbreaks, and follow pharmaceuticals to fight counterfeit drugs. Many of us start our cars using RFID chips embedded in the ignition key.

RFID chips, injected under the skin, can store a medical history or be used to control access to secure areas. The next generation of passports and credit cards are hotbeds for RFID. It could make bar codes obsolete.

But the same year, 2006, the Department of Homeland Security released a report -- Data Privacy & Integrity Advisory Committee The Use of RFID for Human Identify Verification, which was adopted on December 6, 2006.

Here are the ranges for RFID technology, according to Cloud Collected, which make it clear that, currently, there is no way using RFID to track people anywhere doing anything from any place by the government or some nefarious actor: 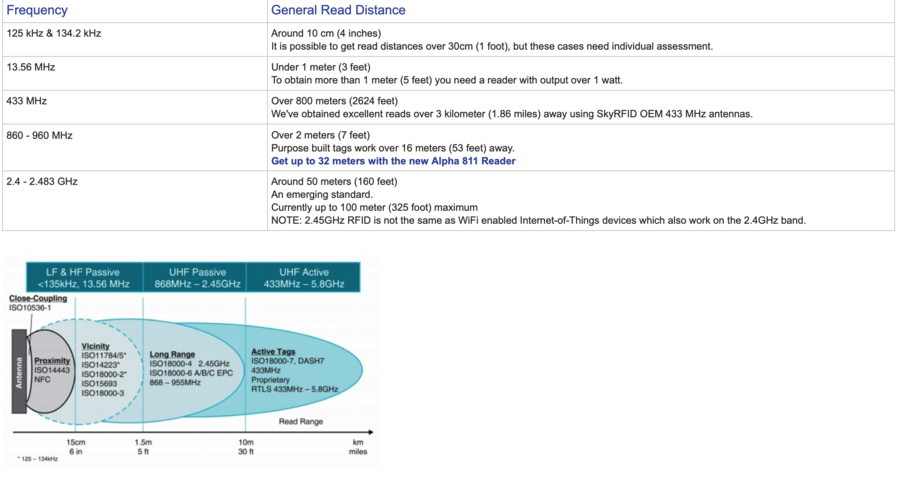 Fact Check: NO Evidence Social Distancing And COVID-19 Are A Government Plot To Track And Control Citizens

Fact Check: Photos Do NOT Show Mass Microchipping In Sweden Has Begun

Fact Check: Bill Gates Will NOT Personally Profit From A COVID-19 Vaccine And He Does NOT Own A Company That Will Put A Tracking Microchip In You

Fake News: The United Nations Has NOT Decreed That Humanity Should Place The Microchip