Were Nancy Pelosi's Daughters Arrested Breaking Into Liquor Store For 'Quarantine Supplies'? No, that's not true: This story is from a website that caters to an audience which frequently falls for fictional stories that portray liberal politicians negatively.

The story appeared in an article (archived here) where it was published by bustatroll.org on May 11, 2020 under the title "Pelosi's Daughters Arrested Breaking Into Liquor Store For 'Quarantine Supplies'". It opened:

The apples don't fall far from the tree, they say, and nowhere is it more obvious than in the case of Nancy Pelosi's daughters. Often in trouble, they have lately shown that they share the trait most commonly associated with their mother.....a hopeless addiction to alcohol.


Both Melissa, 21, and Daphne, 19, were arrested this past weekend in San Francisco, California for breaking and entering. Officers were alerted to their crime by a silent alarm at "This Is The Way To Liquor," a liquor store close to their home that had recently decided to temporarily close due to slow sales during the state's lockdown.

The photo featured with this fictional article shows two women who appear to be handcuffed, these women are not Nancy Pelosi's daughters. She does not have daughters named Melissa or Daphne. The cropped photo is from a news story about two women who really were arrested in Peru for smuggling drugs. The photo appears in a slideshow in the August 25, 2013 Belfast Telegraph article (here) (archived here) titled, "Peru drug arrests: Dungannon woman Michaella McCollum 'forced to carry drugs.' 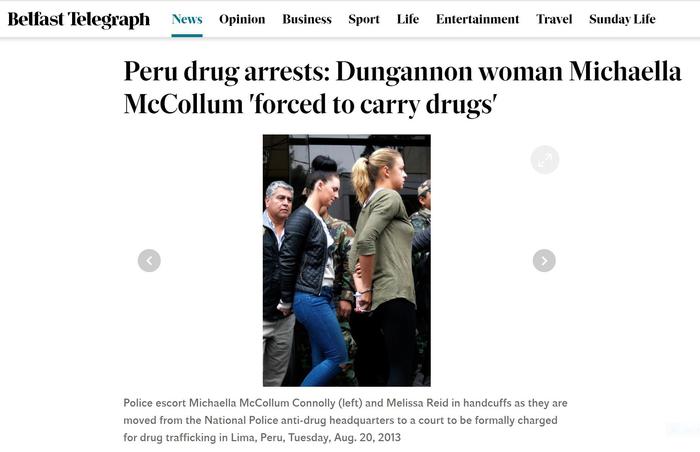 This swapped photo also bears the "S for Satire" watermark of this website. Another feature commonly found in these satire articles are pieces of hyperlinked text.

In this case, the text, "associated with their mother" goes to Google Translate, with a caption preset as the phrase to translate into Russian: