Are 5G cell towers targeting children at playgrounds with radiation that causes cancer and infertility as part of a "genocide"? No, that is not true. There is no proof that 5G causes cancer or infertility, and zero evidence that telecom companies are aiming the tech at children in schools, playgrounds and other places. In fact, a video making these and other claims relies on unsubstantiated science and several times references a now-withdrawn study.

The claims can be found in a video (archived here) shared on Facebook on July 26, 2020. The video, posted on the Stranger Than Fiction News page, was titled "BREAKING: 5G CELL TOWERS TARGETING CHILDREN AT PLAYGROUNDS SHOCKS RESIDENTS - CHILDREN CAN NOT CONSENT TO RADIATION." It opened with a woman saying:

So when you start researching 5G technology, you discover that they have the same capabilities as military-grade weapons. And they're being installed in places like playgrounds, residential neighborhoods, schools -- farms of all places -- and those most susceptible to the radiation are fetuses in utero and children. 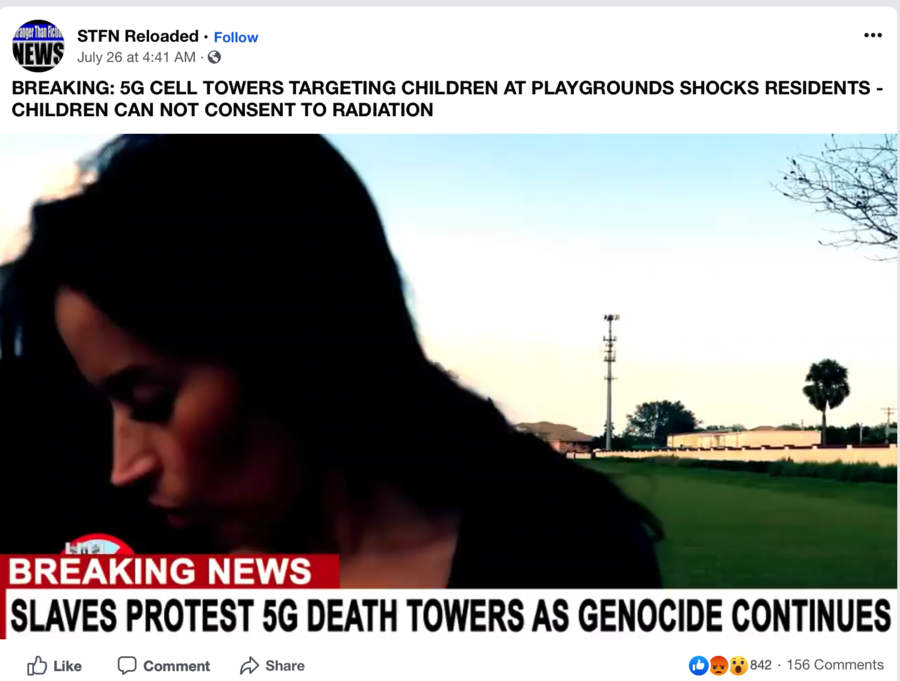 Stranger Than Fiction News delivers powerful reports on Politics and Current events... if you're tired of the GMOs, the endless wars, the mandated vaccines, the geo-engineering, then STFN is the place for you."

The video does not provide any sourcing or data to back up its claims. There is just a series of people, who are unidentified, making unsubstantiated claims about the technology that is the fifth generation of cellular network technology.

The video also shows multiple shots of what appear to be cellphone towers, but there is no evidence given that they are 5G towers. Also, there is no mention of the word "genocide" in the video, despite the blaring title to the video that "GENOCIDE CONTINUES."

5G towers, according to the American Cancer Society -- which says more research is needed on 5G but so far no cancerous implications have been found -- emit non-ionizing radiation, not the much stronger and more severe ionizing radiation:

Cell phones communicate with nearby cell towers mainly through RF waves, a form of energy in the electromagnetic spectrum between FM radio waves and microwaves. Like FM radio waves, microwaves, visible light, and heat, they are forms of non-ionizing radiation. This means they do not directly damage the DNA inside cells, which is how stronger (ionizing) types of radiation such as x-rays, gamma rays, and ultraviolet (UV) rays are thought to be able to cause cancer.

Here is an illustration of the types of radiation and the impacts from the National Cancer Institute: 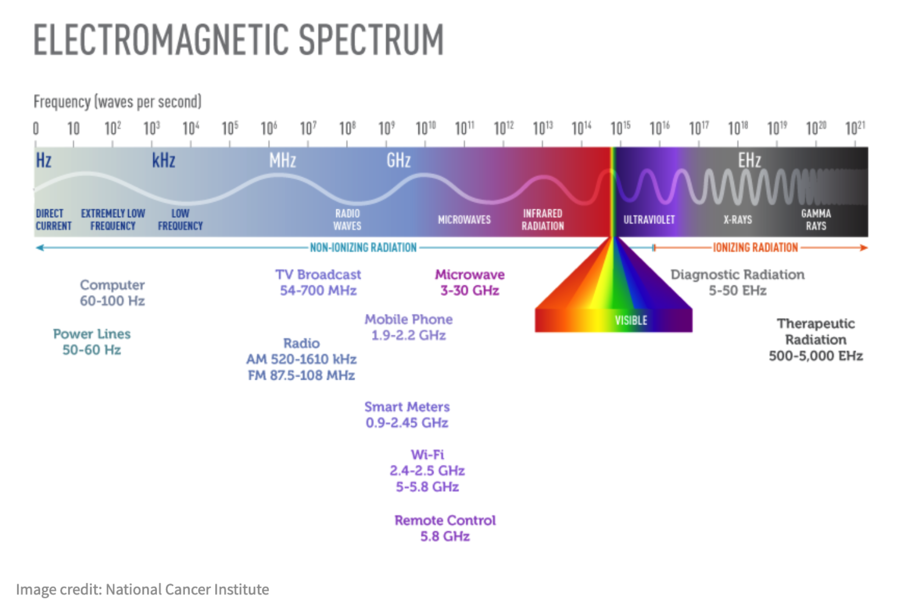 The American Cancer Society said in a section titled "What about 5G networks?" that 5G may prove to be safer that 4G and previously technology:

Fifth generation (5G) cellular networks are now being rolled out in many parts of the United States and in other countries. 5G networks are capable of transmitting much larger amounts of data over shorter periods of time than previous generations (4G, 3G, etc.).

Earlier generation networks have used RF wavelengths below 6 gigahertz (GHz). 5G networks will use some wavelengths in this range, but will also use some higher frequency wavelengths, at the lower end of the millimeter wave spectrum (which ranges from 30 GHz to 300 GHz). While these RF waves are higher frequency (higher energy) than those used by older generations, they are still forms of non-ionizing radiation, so they still lack the ability to directly damage DNA.

The higher frequency waves used by 5G travel shorter distances and don't go through objects (such as buildings, or even tree leaves) as well as lower frequency waves. Because of this, 5G networks require many more, smaller versions of base stations (often referred to as small cells) in some places, especially in densely populated areas. These small cells can be mounted on streetlights, utility poles, buildings, and other structures. This could result in the antennas being closer to people, although small cells typically operate at much lower power levels than the larger (macro) base stations.

The addition of the higher wavelengths from 5G networks could also expose people to more RF waves overall.

At the same time, these higher frequency RF waves are less able to penetrate the body than lower frequency waves, so in theory they might be less likely to have any potential health effects. But so far this issue has not been well studied.

At this time, there has been very little research showing that the RF waves used in 5G networks are any more (or less) of a concern than the other RF wavelengths used in cellular communication.

We'll deal with the concerns raised in this video, with the first claim coming right at the beginning:

So when you start researching 5G technology, you discover that they have the same capabilities as military-grade weapons. And they're being installed in places like playgrounds, residential neighborhoods, schools -- farms of all places -- and those most susceptible to the radiation are fetuses in utero and children."

Lead Stories did not find research saying that 5G will be deployed in specific weapons. Cell towers do not emit the frequency needed to be weaponized, according to this LinkedIn article by Dr. Michelle Dickinson, in which she states:

So what about that big scary rumour that 5G is used as a weapon by the military and therefore installing 5G is the governments plan to attack us all.

Well, everything at a high enough dose will kill you - even water, and I don't see you running from that!

It's true, some military weapons use something known as an Active Denial System which uses high energy millimeter waves, but these are directed waves which are very different to the radiated waves that a cell-tower would use. The waves are non-lethal and used like an invisible security fence, to do this they need to operate at a frequency of 95GHz which is way higher than the upper frequency that 5G will be using. They also run at over 30 kilowatts, whereas the small, lower-power 5G base stations are generally outputting 2-10 watts.

So to sum it up, yes 5G technology can be used as a weapon, but not by 5G cell-towers, they just can't produce the power or frequency to do that. "

Wireless radiation has already been linked to cancer, heart disease, diabetes, miscarriages, birth defects and infertility. Due to their exterior anatomy, male testicles are especially susceptible to radiation, which lowers sperm count. Just the same, cellular radiation kills off irreplaceable eggs in females."

According to a March 2020 Forbes story, the radiation emitted from 5G "throws into doubt the claim that 5G could cause brain cancer or other cancers...it is quite clear that not only is 5G safe -- it's likely safer than 4G."

There has been at least one study tying high levels of radio frequency radiation to cancer in male rats, but according to this interview with experts, more study is needed before concluding that any harm could come to humans via this type of radiation. A Digital Trends interview, written in April of this year, had this from the U.S. Food and Drug Administration, with the FDA saying it:

'continues to believe that the current safety limits for cellphone radiofrequency energy exposure remain acceptable for protecting the public health.

The limits are based on the frequency of the device, meaning that 5G has a different limit than other technologies. As part of our commitment to protecting the public health, the FDA has reviewed, and will continue to review, many sources of scientific and medical evidence related to the possibility of adverse health effects from radiofrequency energy exposure in both humans and animals and will continue to do so as new scientific data are published.'

These towers...will be unleashing severely damaging levels of radiation to the DNA...These towers have been stationed strategically in places such as parks...schools, residential areas, neighborhoods and places where your children, your pets and yourself can be extremely effected."

Again, non-ionizing radiation does not harm human DNA. And while towers could be near places where children would be, there is no evidence that they were "strategically" placed there to harm kids or anyone.

At 2:02, the video says that "over 230 scientists from over 40 different countries have accumulated overwhelming, substantial evidence," that 5G poses serious harm to people. But this is not a resolved issue.

A movement called 5G Appeal warning of purported health implications of the tech on humans and calling for a moratorium on the rollout of 5G was initiated in the European Union in 2017. According to the 5G Appeal website:

Over 230 scientists from more than 40 countries have expressed their "serious concerns" regarding the ubiquitous and increasing exposure to EMF generated by electric and wireless devices already before the additional 5G roll-out."

Too much exposure can literally fry the human central nervous system.

A review of available scientific and medical research by the National Institutes of Health looked at some of the most pressing concerns about cellular tech, and particularly 5G, and it concluded that more research was needed. But to date, it is not true to say that any study has found conclusive proof that any of the maladies mentioned in the 4-minute-11-second video are caused by 5G tech or the towers supplying it to our devices.

The video also makes several mentions of regulatory problems and skipped public input in the nation's plan to roll out 5G tech. This is not true, according to this article in Forbes -- which gives the U.S. rollout a grade of A -- showing many regulatory hurdles must be overcome, and much public input has been sought, to secure policies that allow for the distribution of 5G.

This survey article from Science Direct, with links to other studies, explains how agencies will be working together, and this video, found below, describes the Federal Communications Commission's 5G FAST Plan (The video is presented by FCC Chairman Ajit Pai):

Lead Stories has written several articles debunking claims about 5G, including these: