Does Democratic presidential nominee Joe Biden have a plan to raise the tax rate on families earning $75,000 from 12% to 25%, more than doubling what families now pay with that income? No, that's not true. Biden's tax plan actually calls for boosting Social Security and income taxes for people making more than $400,000. Nowhere in Biden's tax plan is there mention of a hike to a 25% rate for people making $75,000.

The claim appears as a meme in a post (archived here) published on Facebook on August 18, 2020, "Make America Great - We Support President Trump" page. The meme was introduced with the text "For young folks who don't get it.... This........." The meme read:

Bidens tax rate on a family making $75,000 dollars would go from 12% to 25%. That's a little more than DOUBLE what you're paying now in taxes will be removed from YOUR paycheck should Biden win. Be wise. Nothing promised is free...not to those employed it's not. Someone has to pay...and if you're employed...it's YOU. Remember this when you vote!! TRUMP 2020"

This meme is not backed up "with facts and proof." Instead, it is flatly false. According to the independent Tax Foundation, these are the Key Findings on Biden's 2020 Tax Plan:

Similar conclusions were drawn by the independent Tax Policy Center and the Committee for a Responsible Budget. The latter organization wrote on July 30, 2020:

Biden would raise the corporate tax rate from 21 to 28 percent, set minimum corporate taxes for domestic and foreign income, restore the top individual tax rate from 37 to 39.6 percent, tax capital gains as ordinary income and at death for very high earners, limit various tax breaks for higher earners, subject wages above $400,000 to the Social Security payroll tax, and pass various other cuts and increases."

Lead Stories reached out to the Biden campain and this story will up updated when a response is received.

In the meantime, Reuters, in its own fact-check of a similar claim, received this emailed comment from Biden campaign spokesman Michael Gwin:

Vice President Biden has made clear that no one making less than $400,000 will see their taxes raised under his plan, period.  Moreover, Biden will give millions of middle-class families a tax cut through new refundable credits that lower the cost of health insurance, help first-time homebuyers buy a house, and assist working families pay for child care." 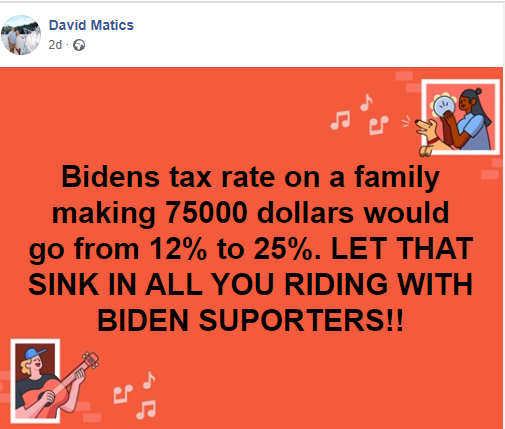 I saw it on MSNBC...there was a guy on the show saying that a tax was coming that was not in the plan...that called for an increase that would go from 12% to about double that."

Matics said he saw the piece the day of his August 16 post. Lead Stories could not immediately find the clip to which Matic was referring. But here is a breakdown from FOXBusiness, that includes the following:

Here's a look at some of the major tax changes Biden plans to enact if elected:

Biden would repeal changes made to individual income tax rates for the wealthy (individuals with incomes over $400,000) under the 2017 Tax Cuts and Jobs Act, which means the top rate would revert back to 39.6 percent, from 37 percent.

Additionally, income above $400,000 would be subject to the 12.4 percent Social Security tax - split evenly between employees and employers. Currently, there is a wage cap of $137,700. Wages between those two ranges would not be taxed.

Both memes, which basically contain the same conclusion, are false.