On August 17, 2020, Lead Stories issued a fact check regarding a claim that a photo showed Chuck Schumer kissing a child on Epstein's Island. Our fact check focused on the history of the captions that have been associated with that photo over the past year, and demonstrating that the man in the photo is not Chuck Schumer.

On August 21, 2020, Lead Stories was contacted by the man who appears in the photo. He is the father of the child in the photo. Lead Stories saw other family photos where he appears with his wife and daughter. There is no question the man who contacted us is the man in the photo or that they are a family. For their privacy they will not be identified. He is distraught that these pictures are being circulated with such defamatory captions and requests that people take them down.

This is Chuck Schumer, kissing a young girl on Epstein Island... it's one of many! It is real, not photoshopped...
These are the people who want to run your world! 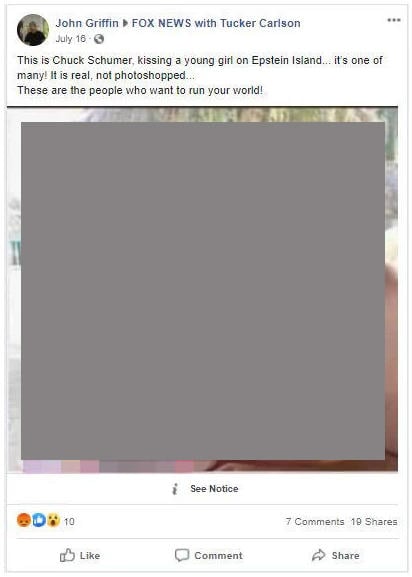 The man in the photo does appear close in age to Schumer and there are similarities, there are many reasons we know it is not the senior senator from New York.

One major difference is the hairline. Schumer's hairline is very straight because of a hair transplant

This screenshot of Schumer speaking at the 2012 Democratic National Convention shows he already had the transplant. 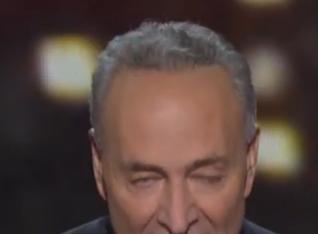 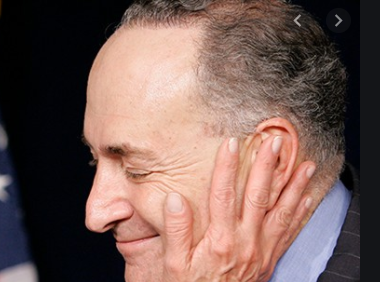 This is a close up of the hairline in the photo of the man kissing the child:

There are several versions of this meme with a variety of captions. Contrary to the claim in this caption that this photo is "one of many," this is the only photo circulating online showing this man and child at this location. It does not appear to be photoshopped, although there are versions which appear to have been color processed. The photo has also been cropped. The original 2019 version of the photo, from before Chuck Schumer's name became involved, includes a table with some beer cans and a plastic water bottle.

This is how the photo appeared in a Twitter post by Don Salmon (here)(archived here) on June 16, 2019. In this tweet, the author's caption does not name the person or the place where this photo originated. The caption says, "This is what pedophile looks like. Black family keeping your kids away from white men. They are pedophiles. You're somewhere safe they should not adopt black babies." It does seem that they are re-sharing a screenshot of an earlier tweet as there is another caption, "Wtf? (:angry) this is sickness" in the photo. Lead Stories was unable to locate that original tweet for date and origin, it has possibly been deleted. 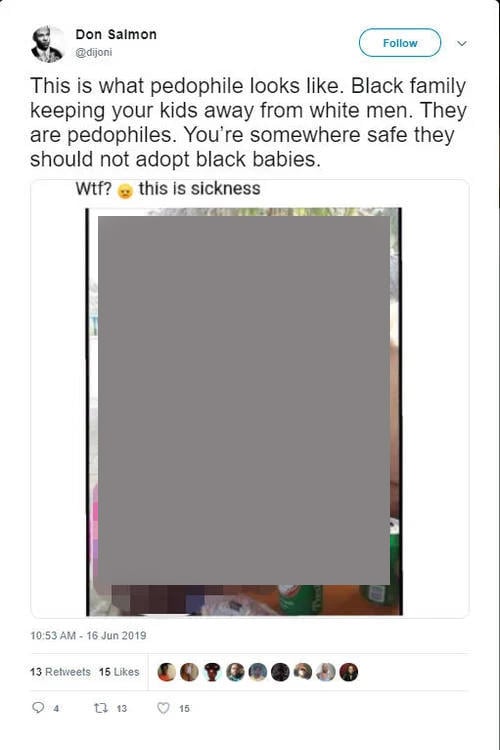 On January 21 2020, a Facebook page named "Focus On Gambia" published the photo (here)(archived here) with the caption:

We should be the police, citizens policing, the police cannot be everywhere. Do you know this man in the picture? The government of the Gambia must take legal action against pedophiles in the Gambia.

#enough is enough. Its too sad, there are grown up women. Hands of our little girls.

Another copy of the photo (here)(archived here) was published to Instagram on February 7, 2020, by the account @hommekemite with a caption in French, "Quand vous vivez en dessous de 500 francs CFA par jour mais que c'est vous qui voulez faire des enfants, viola le sort que vous leur réservez! Pauvre Afrique!," added to the photo. Hommekemite added a long block of text in French in the comments of their post. This text appears to have originated from an article which was published by The Sun (here)(archived here) on January 16, 2020, titled, "SICK SALES Inside 'paedo paradise' The Gambia where sex beasts are buying African children and toddlers to rape." Although the timing of these two posts does seem to have happened shortly after this article was published in The Sun, this photo does not appear in the Sun article and none of the photos in that article appear to be at this location. 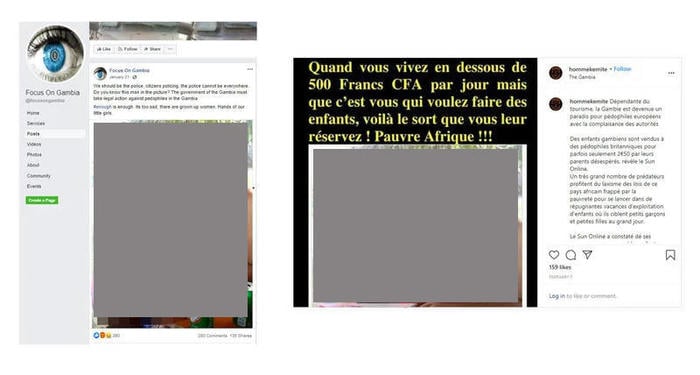 Several Gambian people commenting on the Facebook post pointed out that the brand of beer on the table is not available in Gambia. The beer, Presidente, is from the Dominican Republic and is exported to several countries, but not Gambia.

To summarize, In June of 2019, this picture was presented on Twitter as a photo of a random pedophile with no name or location offered. In January of 2020, social media posts announced the location was Gambia shortly after an article appeared in The Sun about European Tourist Pedophiles in Gambia. Then in late June 2020, the man in the photo was falsely identified as Chuck Schumer and the alleged location was switched from Gambia to Epstein's Island. In mid-August 2020, Lead Stories was contacted by the man in the photo who identified himself as the father of the child. This photo has nothing to do with pedophilia, Gambia, Epstein Island, or Chuck Schumer.