Did the CDC predict an outbreak of AFM (acute flaccid myelitis) cases to cover up anticipated future vaccine injuries from the COVID-19 vaccine and flu shot? No, that's not true: The CDC has been tracking AFM cases since 2014. AFM is not caused by vaccines. A spike in cases of this very rare disease every other year has been recognized long before the world ever heard of COVID-19 or the push for a vaccine to stem the pandemic.

The claim originated from a post that was reproduced as a screenshot and included in a post (archived here) on Facebook on August 8, 2020, with the title, "🙏 you have been warned 🙏." Because this is a screenshot of an earlier post, the original inclusion of an article from thehill.com shows viewers a photograph of the headline but not a link to the actual article. The original post's caption plays off the message in that headline and reads:

THIS IS A MASSIVE WARNING so pay close attention friends and family!!! They are gonna force influenza and covid19 vaccinations on all these school children over the next few months and one of the known side effects is AFM (Acute Flaccid Myelitis) which is a PARALYSIS!!! The CDC is gonna blame it on a natural occurance, but it's NOT, it's a direct result of these vaccines and their side effects, and it's CLEARLY listed on the vaccine inserts as a known side effect they noted in clinical trials. They are paving the way and covering their asses by PREDICTING that an outbreak of AFM is gonna randomly appear out of no where and afflict our children. You have been warned.

Many news outlets have published similar articles and TV news segments recently to raise awareness of this very rare disease that affects about one in a million people. When a person is affected by AFM it is critical that they are seen by a specialist as soon as possible. Because it is such a rare condition, there has been an effort to raise awareness so that parents might recognise the symptoms and get their child medical care as soon as possible.

A segment that aired on July 10, 2019, on Local 4 News in Detroit is an example of the effort to raise awareness of both parents and health care providers. Dr. Frank McGeorge explains that AFM tends to peak in even-numbered years, but there are cases occuring every year.

AFM is a rare but severe and potentially life-threatening disorder targeting the gray matter of the spinal cord, most often in children. Although it is not a new disorder, significant spikes in AFM cases have occurred every other year since 2014, directly correlating with the circulation of specific enteroviruses. Long before SARS-CoV2 came into existence, the medical, scientific, and public health community followed AFM, anticipating, and preparing for another spike of this condition related to enteroviruses in 2020. Since CDC began tracking AFM in 2014, no cases have shown to be related to vaccination. None of the individuals have tested positive for the poliovirus. How AFM preferentially attacks the anterior horn cells of the spinal cord is also different from what we typically see with a post-infectious demyelinating diagnosis. During these outbreaks, the most likely cause is a specific virus, Enterovirus D68.

Since AFM's confirmed cases do not link to vaccines, no evidence exists to believe a vaccine for SARS-CoV2 could cause AFM. The CDC, the medical community, patient advocacy organizations, and families diagnosed in the past have worked to ensure cases of this life-altering diagnosis will not be overlooked amongst the testing and concerns of the COVID-19 pandemic because we have now entered the season when Enterovirus D68 would be expected to circulate. The messaging is NOT because of a concern that COVID will lead to similar outbreaks of AFM. Awareness of AFM is key in diagnosing AFM ... During an already frightening and uncertain time of a global pandemic, it's understandable that one may resort to thinking another virus and devastating illness couldn't be possible. Consulting with independent patient advocacy organizations such as SRNA who advocate, educate, and promote research on behalf of children and adults impacted by AFM may help those who find the reality of a rare, devastating diagnosis challenging to believe.

The timing of the recent awareness campaign is not related to COVID-19, the coincidental reopening of schools, or the anticipation of people being vaccinated for flu or COVID-19. The CDC began tracking cases of AFM in August 2014. Over just a few years a pattern emerged that showed certain months and years where there were more cases. The expectation that more cases would be found in August, September and October of 2020 was understood before the world had ever heard of COVID-19. This page from the CDC "AFM Cases in U.S." (archived here) was archived on July 31, 2019. The current version of the page (here) is titled, "AFM Cases and Outbreaks" and contains the same chart (reproduced below) clearly showing the pattern of spikes every two years, but includes the data up to July 31, 2020. 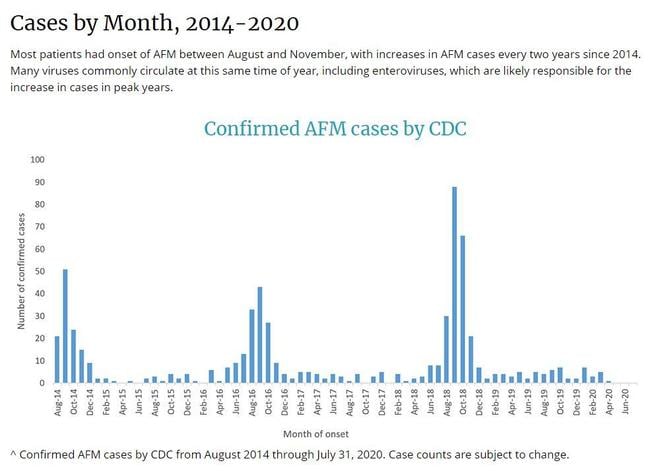 This August 2019 syndicated column "Ask The Doctors" published on TheSpokesman.com titled, "Ask the doctors: Acute flaccid myelitis seen mostly in children" (here)(archived here) also discusses the timing of the CDC's awareness campaign due to the seasonal pattern of case spikes every two years. In 2019 they identify 2019 as an "off" year.

Acute flaccid myelitis is not a new condition, but it has been on the rise in recent years. Due to this steady increase in cases, the Centers for Disease Control and Prevention began tracking the illness in 2014. There have been 570 confirmed cases of the condition since that time, with an average patient age of 5 years. Last year, a total of 233 confirmed cases of AFM occurred in 41 states. This played a role in the CDC's decision to release an update about the condition in early July, which has put acute flaccid myelitis back into the headlines. The timing of this newest update is due to the observation that AFM has a "season," with the number of cases spiking in late summer and early fall.

Although cases of AFM are reported each year, outbreaks appear to surge every two years. The CDC reports that so far in 2019, which according to the previous pattern is an "off" year for the condition, 11 cases of acute flaccid myelitis have been reported. However, because awareness of AFM is relatively recent, it's likely that undiagnosed cases have not made it into the official tallies.