Did the "Deep State" keep Justice Ruth Bader Ginsburg alive just long enough so that President Trump would not have enough time to replace her on the Supreme Court, setting up a "combustible state of limbo" for the United States after the election? No, that's not true: The scenario of a constitutional crisis caused by having just eight justices on the court during a national election is unlikely considering there were just eight justices during the 2016 election. The Congress, not the High Court, is constitutionally charged with deciding the presidential election. Also, there is time for Trump, if he can get party unity, to nominate and get Senate confirmation for a replacement justice.

The claim appeared in a meme in a post (archived here) shared on Instagram by QAnon interpreter "Joe M" on the StormIsUponUs account September 19, 2020. It read:

Play this out. If the Deep State had unplugged RBG earlier, it would have given Trump time to fill her seat. In the case of a contested election, and with compromised Roberts siding with the enemy, it would produce a vote of 4/4 if Trump is not able to fill her seat. There is no tie-breaker in the Supreme Court, which would result in the ruling being kicked back down to the lower court and put the country in a highly combustible state of limbo. It must be precisely why they were keeping Ginsburg alive.

Deep State up to their tricks. #RBG #RuthBaderGinsburg

This is a screenshot: 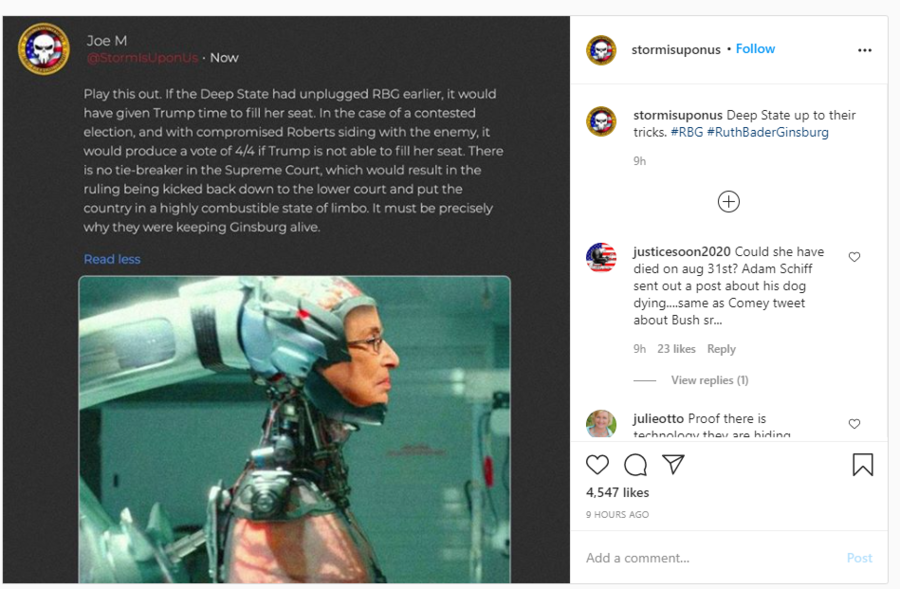 Lead Stories will not bother to debunk here the claim that Justice Ginsburg had been kept alive by the "Deep State," which finally decided it was safe to "unplug" her. We've already addressed a similar claim by the same "Joe M" in a debunk titled Proof Of Life: Ruth Bader Ginsburg Confirms She's "Very Much Alive," Disproving QAnon Conspiracy Theory. This was the earlier post: 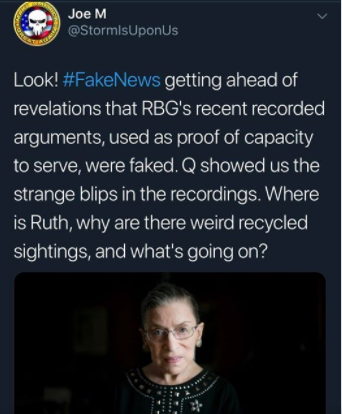 We will address the claim that there is not enough time to replace Ginsburg before a constitutional crisis leads to a "highly combustible state of limbo" after the election.

While the Supreme Court may consider some vote counting controversies on appeal -- as did happen in 2000 -- the justices cannot be reliably divided into four pro-Trump and four pro-Biden votes. Justices, who are appointed for life, have on historic occasions broken ranks from the party that nominated them. The meme itself references a "compromised Roberts siding with the enemy." Chief Justice John Roberts, who was appointed by a Republican president, cast deciding votes -- including on Obamacare -- against the Trump agenda.

Brian Levin, the director of the Center for the Study of Hate and Extremism at California State University at San Bernardino, told Lead Stories that if there is a 4-4 tie, it would keep a lower court's decision intact. That is a decision and not a "limbo."

The election is 45 days after Ginsburg death, which gives Trump enough time to get Senate confirmation of a nominee, as long as there is enough party unity to hold a vote. President Trump appeared determined to make it happen. Less than a day after Ginsburg's death, he tweeted to his party:

[email protected] We were put in this position of power and importance to make decisions for the people who so proudly elected us, the most important of which has long been considered to be the selection of United States Supreme Court Justices. We have this obligation, without delay!

.@GOP We were put in this position of power and importance to make decisions for the people who so proudly elected us, the most important of which has long been considered to be the selection of United States Supreme Court Justices. We have this obligation, without delay!

Finally, it is Congress, not the High Court, that ultimately decides the presidential winner if there is no result from the Electoral College. This is detailed the Government Accounting Office (GAO) report titled The Scope of Congressional Authority in Election Administration.