Did U.S. Transportation Secretary Elaine Chao's father get "caught" operating a coal-carrying cargo ship that was captured by the Colombian coast guard with 90 pounds of cocaine aboard? No, that is not true. While a cargo ship was stopped with 87.7 pounds of cocaine in 2014, and Chao's father's company had ties to the ship, he was not "caught" operating it. The Colombian navy issued a news release soon after the drug discovery that, "There were no people captured."

Hi, I'm Elaine Chao. Before Trump nominated me as transportation secretary, the Colombian Coast Guard caught my father operating a cargo ship with 90 pounds of cocaine on board with millions of dollars. My father also gave my husband, Senate Majority Leader Mitch McConnell, between $5-25 million...making him one of the richest senators.

According to Coast Guard records, the ship in question, Ping May, flies the Liberian flag -- just as it did at the time the drugs were found in August 2014. Ping May Maritime is a New York-based company but this site shows it has ties to Foremost Group Inc. that is owned by the Chao family and was founded by Chao's father, James Chao. The company operates in the U.S. and Asia, according its site.

Here is the Colombian news release about the drug seizure:

Units of the National Navy in the development of a coordinated operation with CTI personnel from the Magdalena sectional Prosecutor's Office, seized 39.8 kilograms of cocaine hydrochloride on board the coal transport ship named "Ping May" and the Liberian flag.

The operation was carried out thanks to the strengthening of the units and the port controls by the National Navy, which in this specific case allowed conducting investigations in coordination with the CTI of the Prosecutor's Office, establishing that the cargo ship was contaminated.

The inspection of the vessel, which was anchored in the Ciénaga - Magdalena sector, was carried out by units of the Santa Marta Coast Guard Station and CTI personnel, who found on board two packages with 40 packages containing the alkaloid , which were located in the chain store. Personnel from the Magdalena sectional CTI carried out the respective tests, giving positive for 39.8 kilograms of cocaine hydrochloride. There were no people captured.

The coal ship "Ping May" arrived in Colombia six days ago from England and was bound for the port of Rotterdam - Holland. This is the fifth foreign cargo ship that has been confirmed to have been contaminated with alkaloids in the port of Santa Marta.

So far this year, there are already more than 28 tons of cocaine seized by the National Navy in the Colombian Caribbean.

The National Navy will continue to carry out operations in order to guarantee the legal use of the sea and to combat drug trafficking and its different modalities used for drug trafficking.

James Chao is not mentioned in the release. But much attention was drawn to the incident when The Nation published a story titled, "Mitch McConnell's Freighted Ties to a Shadowy Shipping Company," on Oct. 30, 2014. The story carried this picture tying James Chao to the Ping May: 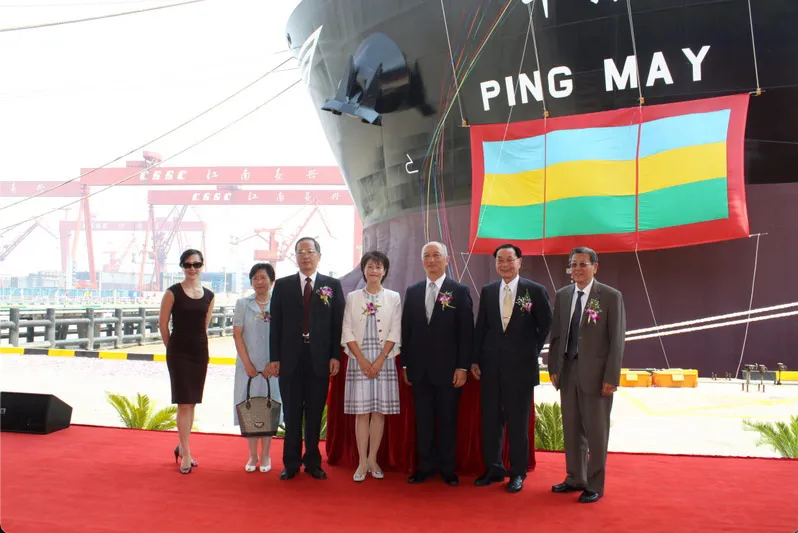 The picture caption read: "Mitch McConnell's father-in-law, James Chao (second from right), at the christening of the Ping May in Shanghai (Image: Shanghai Mulan Education Foundation)"

Although there may be ties between James Chao, who no longer runs the company, and Ping May, there is still no evidence to support the meme's claim that he was "caught" operarting the ship.

Much has been made about Elaine Chao, who was appointed by President Trump in January 2017, and her marriage to Senate Majority Leader Mitch McConnell. Chao has been investigated for showing favoritism in her role toward her family's company.

Separately, McConnell was, in 2018, dubbed "Cocaine Mitch" by Don Blankenship, the Constitution Party candidate for president this November. Blankenship is from Kentucky, the state McConnell represents, but ran in 2018 for U.S. Senate in West Virginia. During that race, which he lost, Blankenship took out an ad against McConnell using the "Cocaine Mitch" name:

He was drawing on The Nation story; still, no evidence exists that James Chao -- or anyone -- was caught or ever charged in connection with the relatively small amount of drugs on the massive cargo ship.

As for the claim that McConnell has benefited from the Chao fortune, making him one of the richest U.S. senators, it is true that McConnell and Chao got an enormous gift from James Chao after his wife's passing. This, according to Politico in June 2009, when both held different roles during the Obama years as president:

Senate Minority Leader Mitch McConnell (R-Ky.) and his wife, former Labor Secretary Elaine Chao, received a personal gift from a family member worth between $5 million and $25 million, according to his annual financial disclosure report, which was released on Friday morning.

The gift came from Chao's father, Dr. James S.C. Chao, a wealthy Chinese-born businessman, and it boosted McConnell's personal worth from a minimum of $3 million in 2007 to more than $7 million.

"That was a gift from Secretary Chao's father in April 2008 to the Senator and the Secretary, in memory of her mother, who passed away in August 2007," said Don Stewart, McConnell's spokesman. Ruth Mulan Chu was a historian.

Gifts of any value from family members to senators are permitted under Senate ethics rules.

While he invested the bulk of the money, McConnell used a portion of the gift to pay off a $100,000-plus mortgage on a Washington, D.C. home, and it more than offset significant losses suffered by the couple in their stock portfolio, the records show."

None of this proves the meme is anything but inaccurate for missing needed context.