Did President Trump post a tweet that said it was "not fair for a president to leave office because of BAD votes" and that "the Supreme Court should decide the presidency"? No, that's not true: It is a fake tweet that was shared as real on social platforms just a day after the president made a real comment refusing to commit to a peaceful transition of power should he lose the election. The tweet, purportedly posted on the afternoon of September 23, 2020, is not on the president's Twitter timeline or in the archive of deleted tweets.

The claim appeared as a screenshot in a post shared on Facebook on September 24, 2020 by a Facebook page named "John J. Ruiz " (archived here) with following introductory text: 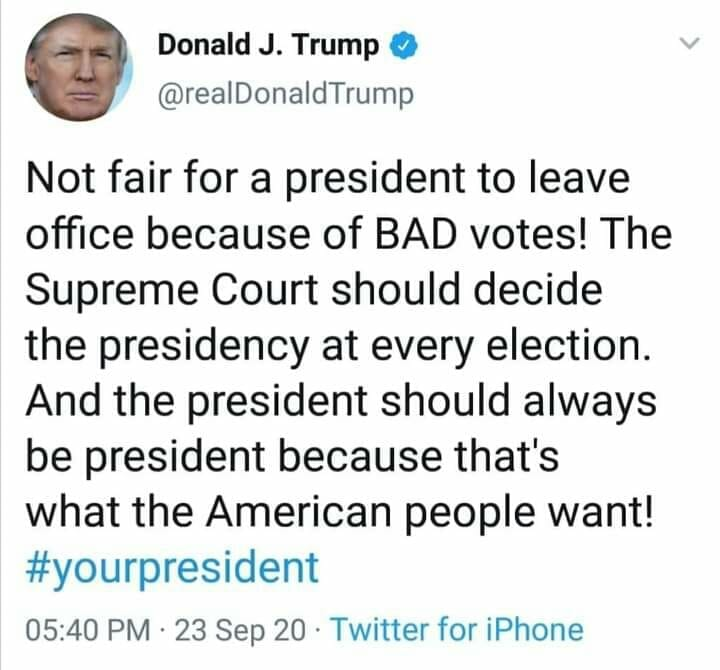 Not fair for a president to leave office because of BAD votes! The Supreme Court should decide the presidency at every election. And the president should always be president because that's what the American people want! #yourpresident

At least a few people were taken in by the hoax, including the poster of this tweet:

You're not only a traitor but a complete joke. The entire world despises you along with the majority of America. You absolute blithering moron. "Bad votes"? Seriously? You sound like a four year old. Please hurry up and get out and take the foreigner with you. pic.twitter.com/RtZnJmFqjN