Did President Trump post a homophobic and racist tweet about his phone call with Colby Covington, an MMA fighter and fervent Trump supporter? No, that's not true: It is a fabricated tweet created by a satire site.

When I called Colby I thought he was champ, but I've just seen footage of him being obliterated by a black guy name Usman. What a p***y. I'm fine with the racism and the homo vibes every time I speak to him, but I don't associate with LOSERS. I won't be calling in future. #MAGA 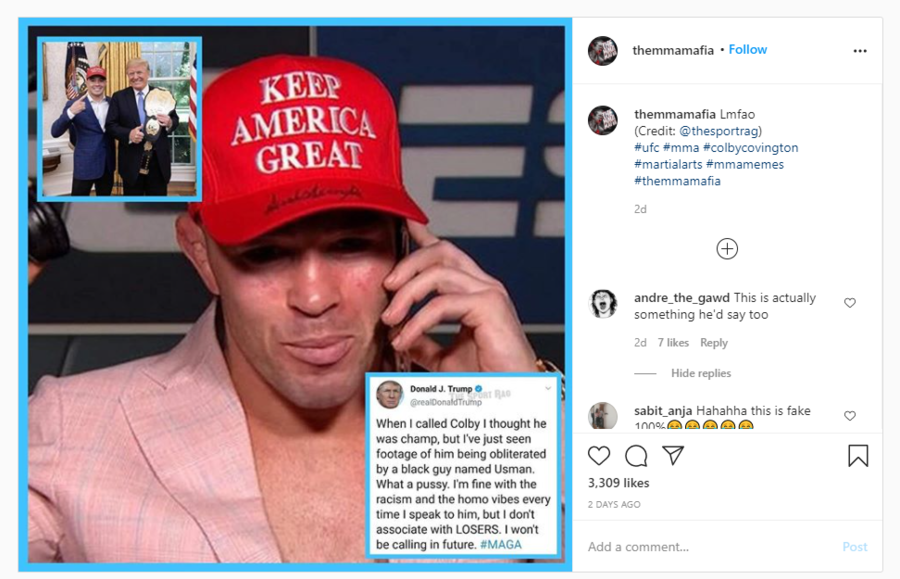 In case that's not evidence enough, there is no instance of that tweet in the database, Factbase, which contains all of Trump's tweets, deleted tweets, public statements, and more. Factbase is a private, for-profit company that maintains comprehensive databases of all public statements by Trump and other public figures.

So what prompted this fake tweet to be created and what is it referring to? On Sept. 19, 2020 Covington took on a Black MMA fighter named Tyron Woodley and won. In Covington's post-fight press conference, Trump called him to congratulate him on his victory. "I'm gonna bring you the new belt to the Oval Office soon after you win November third by a landslide," Covington said on the call. Trump told Covington how he rushed out of his rally in North Carolina to be able to watch the match.

Here is a photo of Covington's visit to the White House back in 2019: