Did Dallas Jones, a political director in Texas for the presidential campaign of president-elect Joe Biden, get arrested for electoral fraud? No, that's not true: No arrest record was offered in support of the claim. A public affairs officer for the U.S. attorney's office for the Southern District of Texas -- the area where Jones is based -- told Lead Stories there is no information in the court record indicating such a charge against Jones, and a search of the Harris County District Clerk's criminal records showed no election fraud cases related to him. Jones told Lead Stories he had not been arrested for election fraud.

The claim appeared in an article (archived here) published by The Point News on November 15, 2020, under the title "Biden Campaign Director Arrested For Electoral Fraud." It opened:

A political director for the Joe Biden campaign has been arrested for electoral fraud. 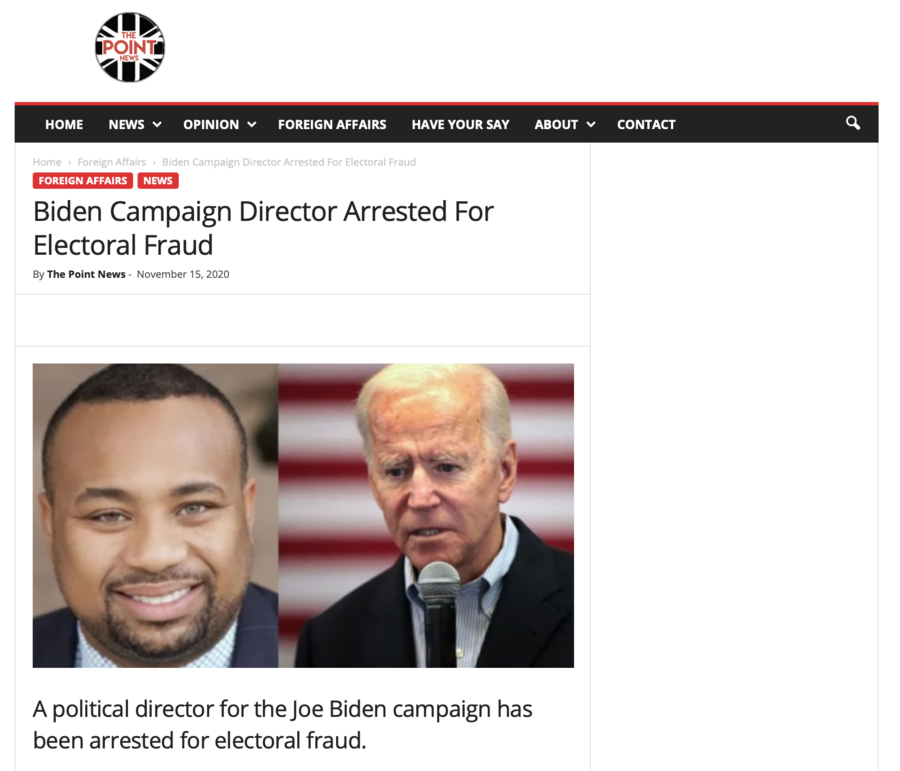 Jones told Lead Stories in a message on LinkedIn on November 17, 2020, that he had not been arrested for election fraud. He added:

I have not been questioned or interrogated by any law enforcement agency in regards to election fraud. These are totally fabricated allegations by the right to shed doubt on this election.

Angela Dodge, public affairs officer for the U.S. attorney's office for the Southern District of Texas, told Lead Stories in an email on November 17, 2020 that, "There is no information in the court record indicating such charges against someone of that name."

Lead Stories conducted a search of the district clerk's records for Harris County, where Jones lives, which is in the Greater Houston area. The search did not show any electoral fraud criminal cases connected with the name Dallas Jones.

Lead Stories also searched the Texas Attorney General's press releases. They include, among other information, details on noteworthy arrests. There was no recent mention of Jones in their recent press releases.

According to its website, The Point News is a newly launched news website that primarily focuses on UK stories. It is sponsored by Turning Point UK, which, according to its website, is a grassroots organization committed to educating young people "on the values of free markets, limited government and personal responsibility." The website states:

It is now more important than ever to defend our values against a dogmatic Left-wing political climate, education system and radical Labour Party which sympathises with terrorists, wishes to disarm the nation and whose Shadow Chancellor of the Exchequer - if elected - would bankrupt the economy.

The Point News article does not offer any evidence that Jones was arrested. The key attribution given in the story refers to what appears to be an article published by the National File in October 2020 that makes no mention of the arrest.

Lead Stories contacted The Point News with questions about the sourcing for the claim on November 16, 2020, and did not receive a response. We will update this report, if appropriate, when they respond.

When asked about the recent claims associated with Jones, a Biden campaign official told Lead Stories in an email on November 17, 2020:

Dallas Jones was not fired by the Biden campaign and these claims are laughably false.

The arrest claim was repeated in an array of social media posts, including a tweet on November 15, 2020, by Nicolas Clamorgan, who posted a photo it appeared he was claiming was Jones being arrested. 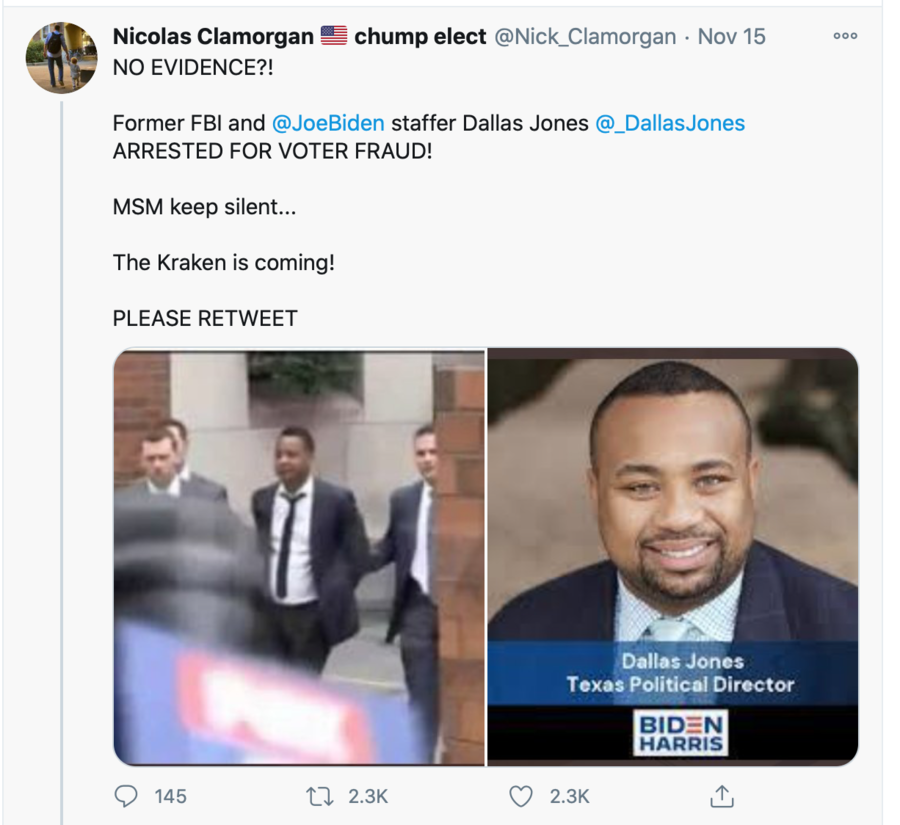 The purported arrest photo is in fact of actor Cuba Gooding Jr. in police custody in New York last year after he was arrested and charged with forcible touching, according to The Associated Press.